Chinese banana plantations first started cropping up about six years ago in Bokeo province, northern Laos, which borders Thailand and Myanmar. Nowadays they cover more than 11,000 hectares, provide US$100 million in annual exports, and make up 95% of Bokeo’s exports, according to a 2017 report by Plan International.

Most Lao banana plantation workers accept their dangerous working conditions because they earn more doing it than other jobs. The landlords renting to the Chinese plantations know they’re associated with pollution, but again, the exchange seems worth it.

Nong, a food shop owner in Bokeo’s capital Huay Xai, rents out land to a plantation. He said Chinese people started coming to Laos about 20 to 30 years ago, running shops at first before moving into rubber and then bananas about 10 years ago. 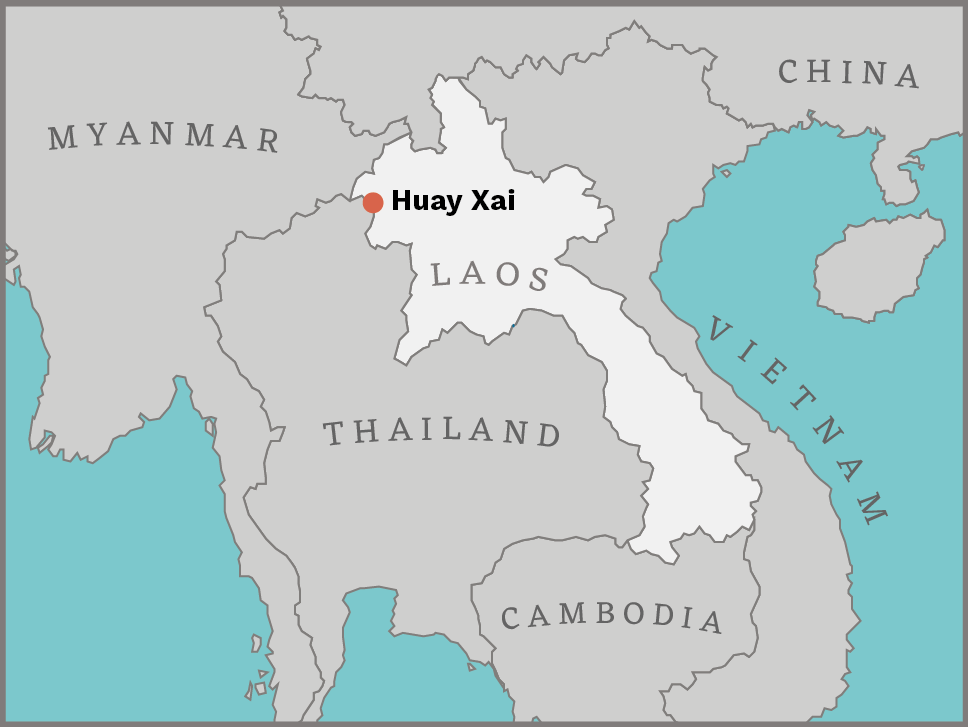 “Twenty years ago, people saw no value in land and they just sold it. Now they know its value and will not sell it,” Nong said.

According to a local broker, five years ago Chinese businesspeople could rent land for a year at US$500 a hectare. Two years ago the price was US$800 and last year it reached US$1,000.

He expects demand to remain high and prices to continue rising. 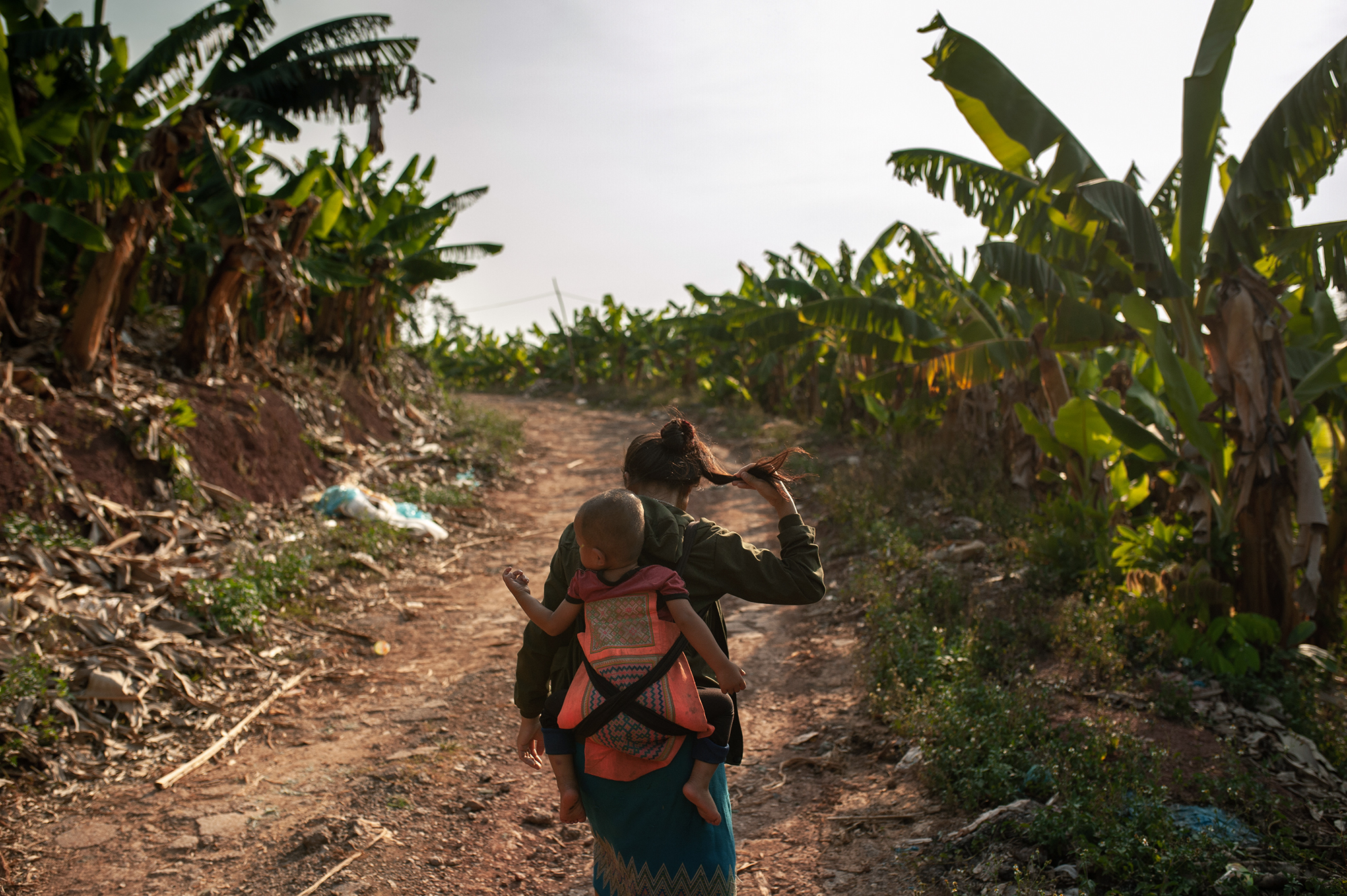 Mohin, 28, and her child on their way to the plantation; workers usually work every day from 7:30 am to 6:30 pm. (Image: Visarut Sankham/China Dialogue)

The land is not just rented for growing bananas. Watermelons and coconuts are also grown. Fortunately, banana plantations have not affected commercial rice production because the government has forbidden renting productive flat paddy land. Hilly and lower quality land is used instead.

“There is no water on the land and even though we spend time working the fields, if there is not enough rain we will not get rice,” explained Nong. Given the risks, he prefers to rent his 1.6 hectares to banana plantation owners for a guaranteed income. 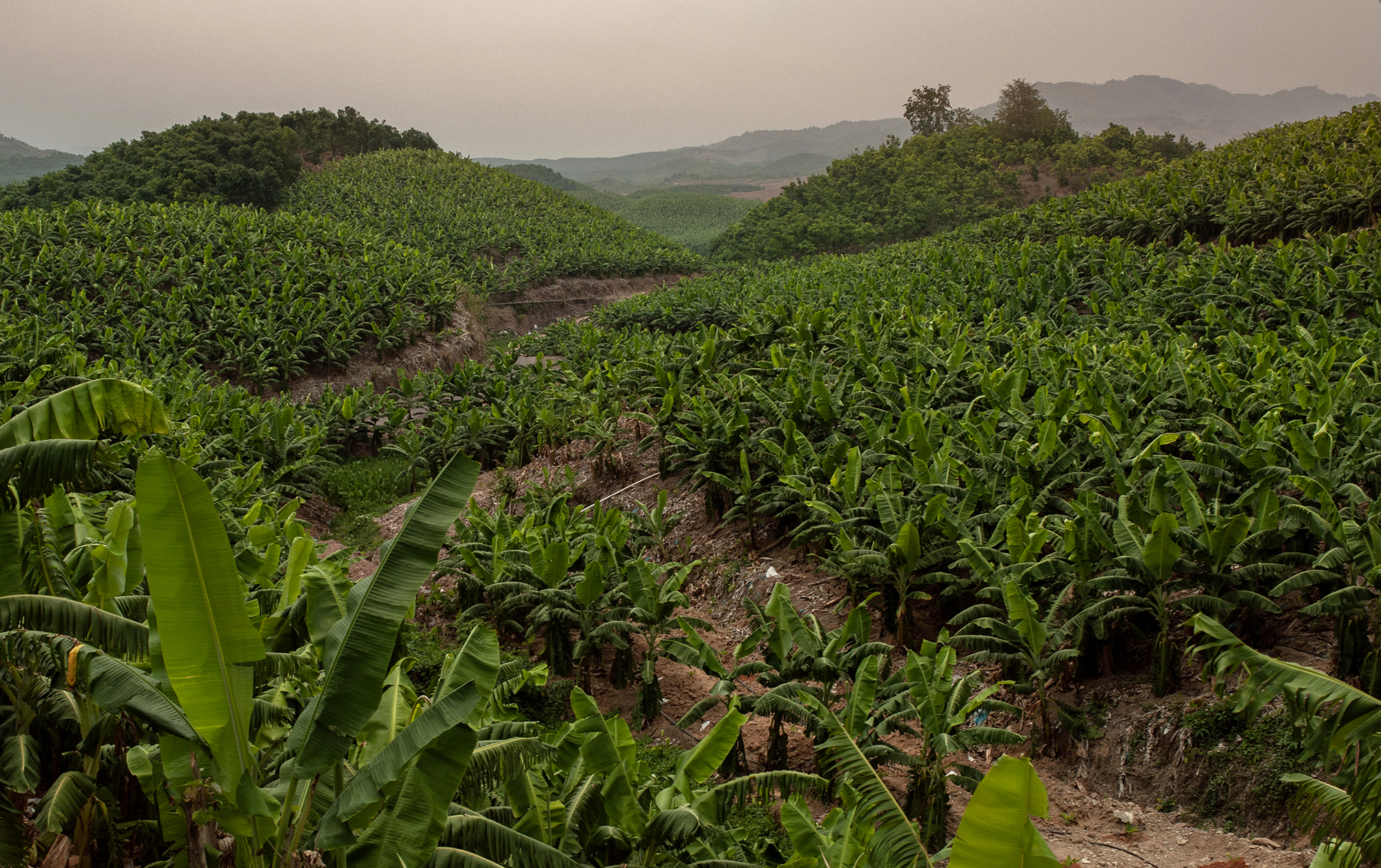 His father-in-law said that his 4.8 hectares of land was once forest that he cleared to grow rice. He’d also use it to hunt wild boar and chickens. Like others, he now rents to banana plantations.

“I had to put a lot of labour into my land and sometimes got nothing in return so I thought it would be better to get a regular income,” he said. He saves the rental money for emergencies or buys gold for his grandchildren.

Now that he farms less, he can also spend more time earning from his other job of building doors and window frames. “I have more time to relax. I am not richer, but it has given me a better life.” 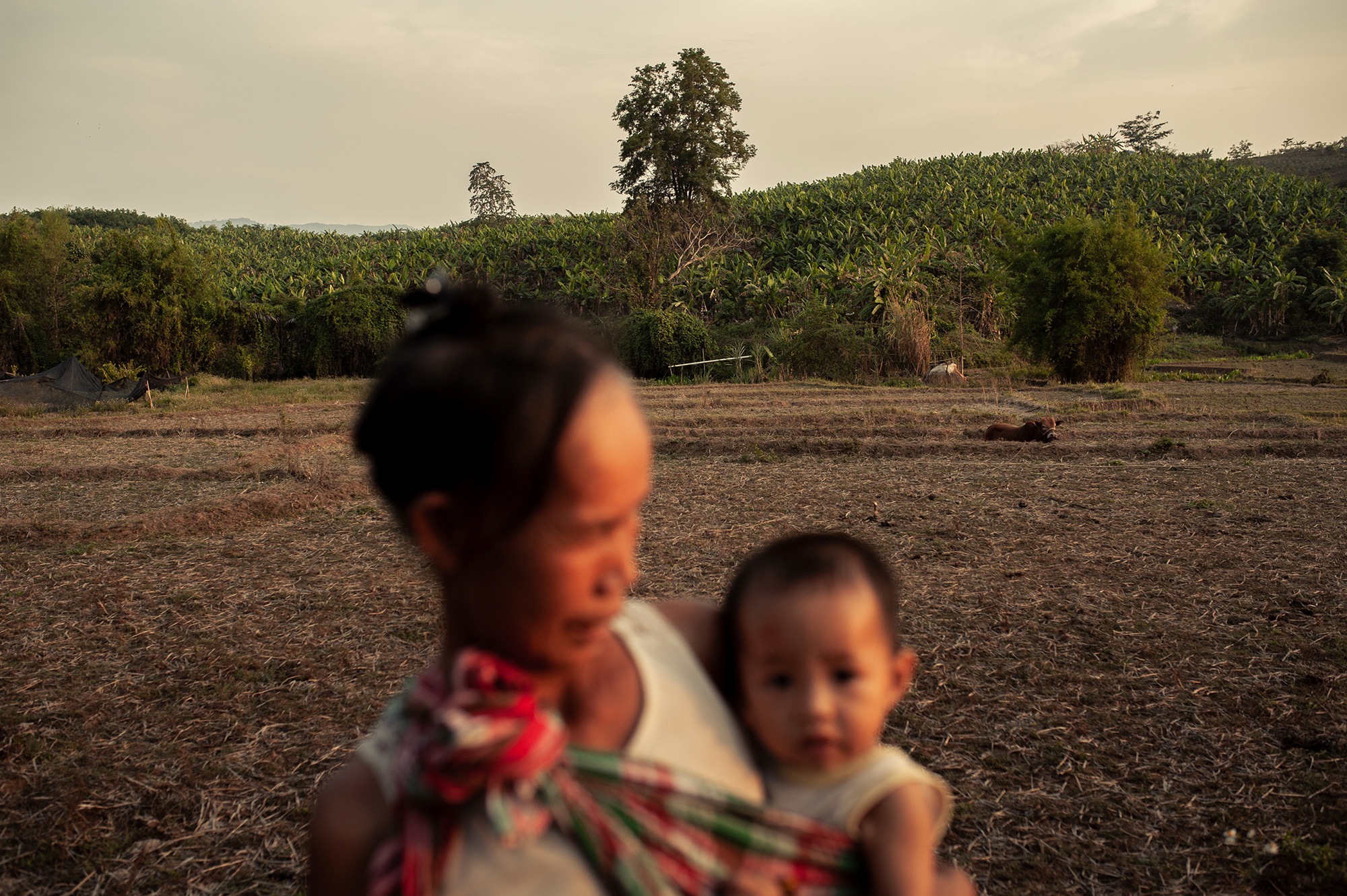 Tiam holds her grandchild in front of the banana plantation that she rents out to the Chinese investor 5 years ago, in Bokeo district for 78 dollars per rai per year. (Image: Visarut Sankham/China Dialogue)

Nong’s father-in-law has mixed feelings about the Chinese banana plantations. “They are good because they have created jobs but bad because they use lots of chemicals.”

He explained that the chemicals end up in the rivers and creeks. “Before we could drink the water from the creek and bathe in it, now we cannot, we have to use water from an underground source. There are also far fewer fish because the chemicals have killed them off.” 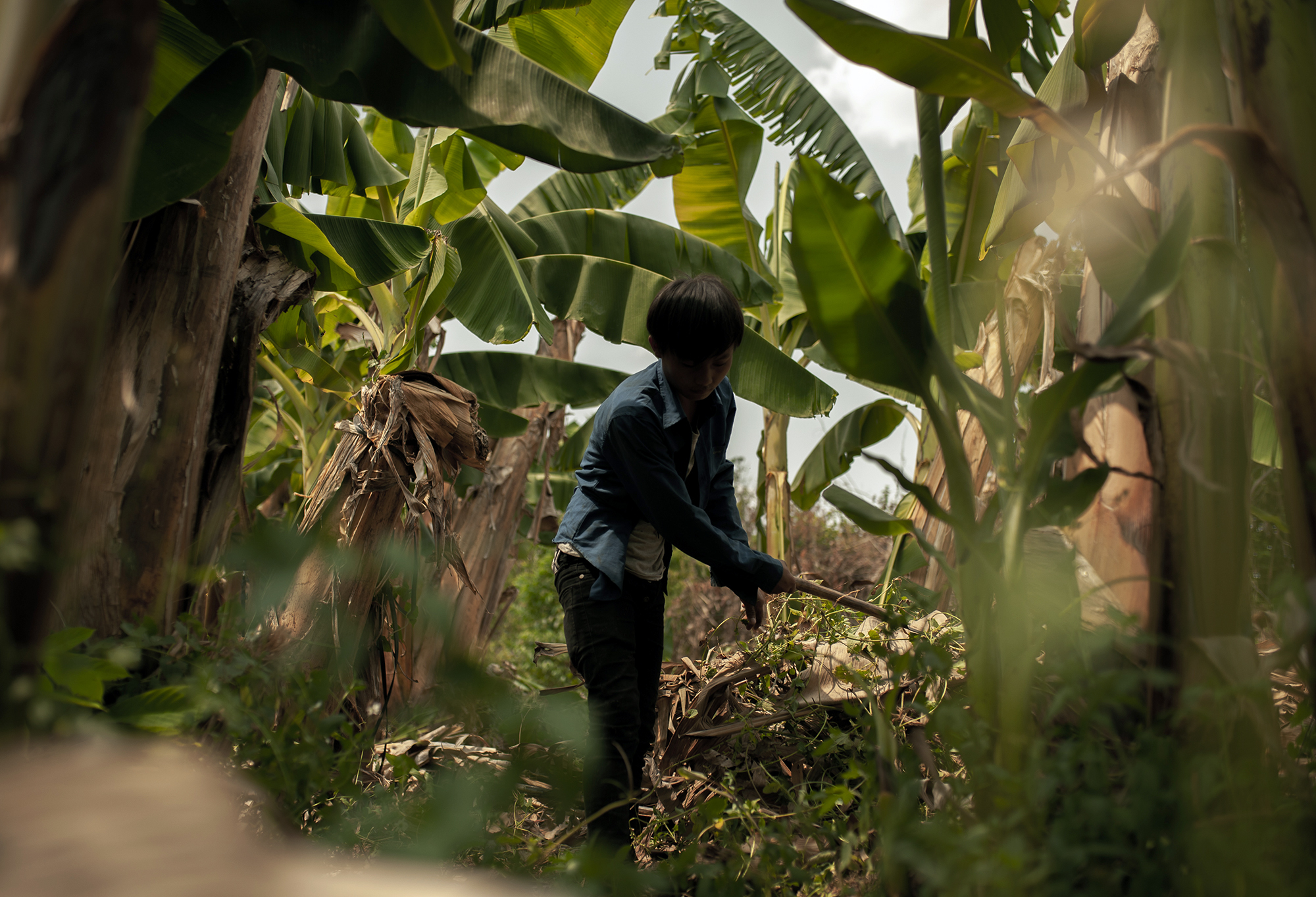 Ton, 16, removes weed in the plantation. Having worked in banana plantations for four years, he wants to try the factories in Thailand but cannot afford the visa. (Image: Visarut Sankham/China Dialogue)

The government is worried about this too. It commissioned research in 2016 that concluded banana plantations were damaging the environment and workers’ health. It banned new plantations and contract extensions for existing plantations in January 2017.

According to Stuart Ling, an independent researcher in agriculture who has produced reports on banana plantations in Laos for NGOs, the ban was lifted in August or September 2018. “The ban has been rescinded and [the plantations] are meant to be putting in improved management techniques including issuing certificates to say they are complying with the chemical laws.”

He said the government is trying to align the industry with Good Agricultural Practices (GAP), a set of rules that promote economic, social and environmental stability, developed by the UN Food and Agriculture Organisation. 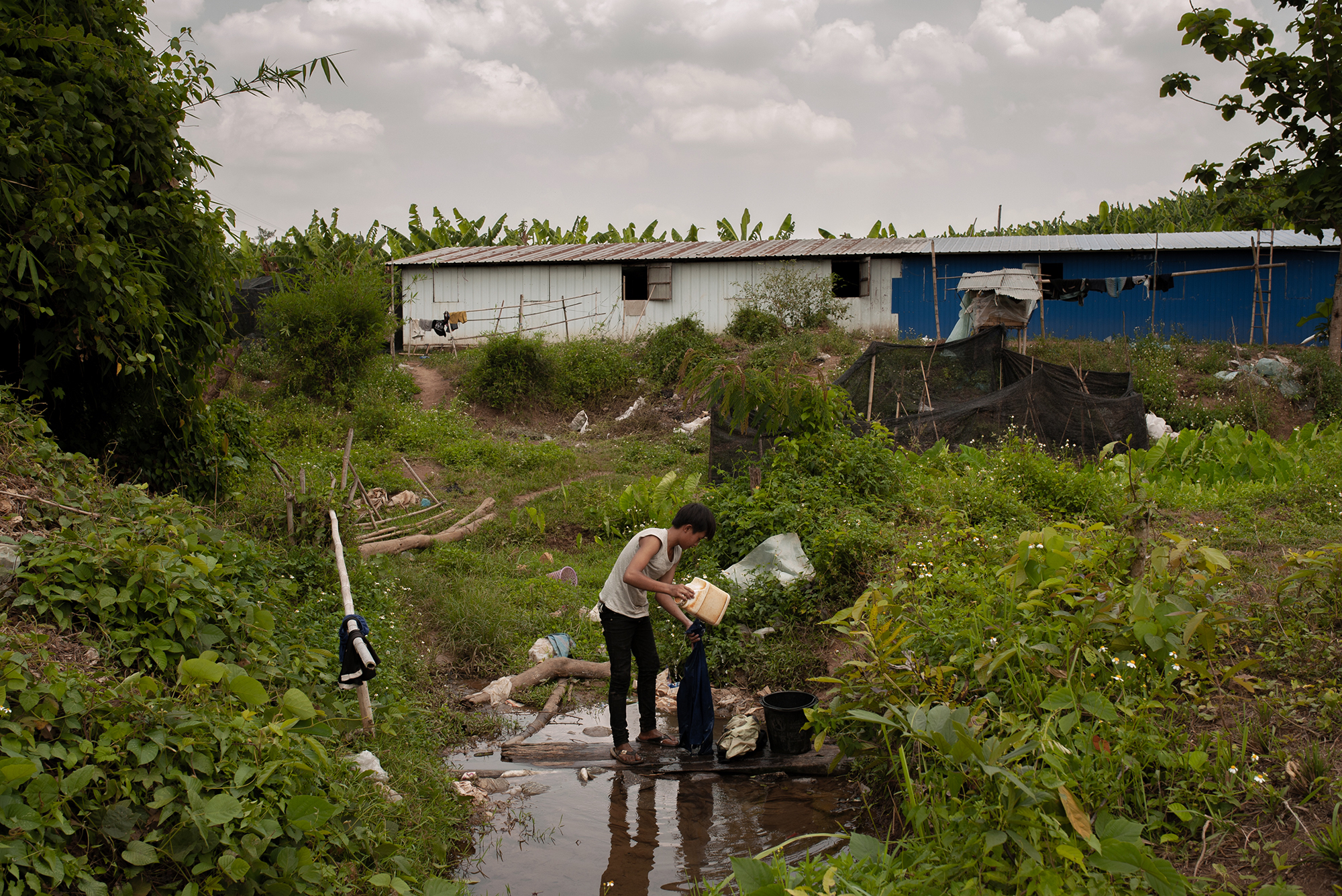 Ton washes his clothes in a small creek below the plantation (Image: Visarut Sankham/China Dialogue)

“The Chinese government also wants bananas to comply with GAP but it is very hard. The Lao government really has no experience, no means to monitor and inspect on a regular basis,” added Ling.

“It will be a long and slow process, so things haven’t really changed much but there is the intention to change.”

The banana plantations visited by China Dialogue do not appear to follow GAP standards. They had large amounts of burnt plastic waste melted into the ground. Piles of discarded boxes, rotten bananas, trash and empty chemical bottles were left in areas where bananas are washed, packed and loaded onto trucks.

The discarded chemical bottles only had Chinese instructions on them. They included bottles of chloropyrifos, a toxic chemical that can cause death or serious health problems, including lung cancer. Even at very small doses chloropyrifos can harm the development of foetuses and children. It is also toxic to fish.

Full-time labourers that live on the plantations and look after them are employed for a season of seven to ten months. Known as worker couples they are normally hired in pairs, usually a husband and wife who often bring their children. Usually each couple has to look after 4,000 to 5,000 banana trees on about two to three hectares of land. 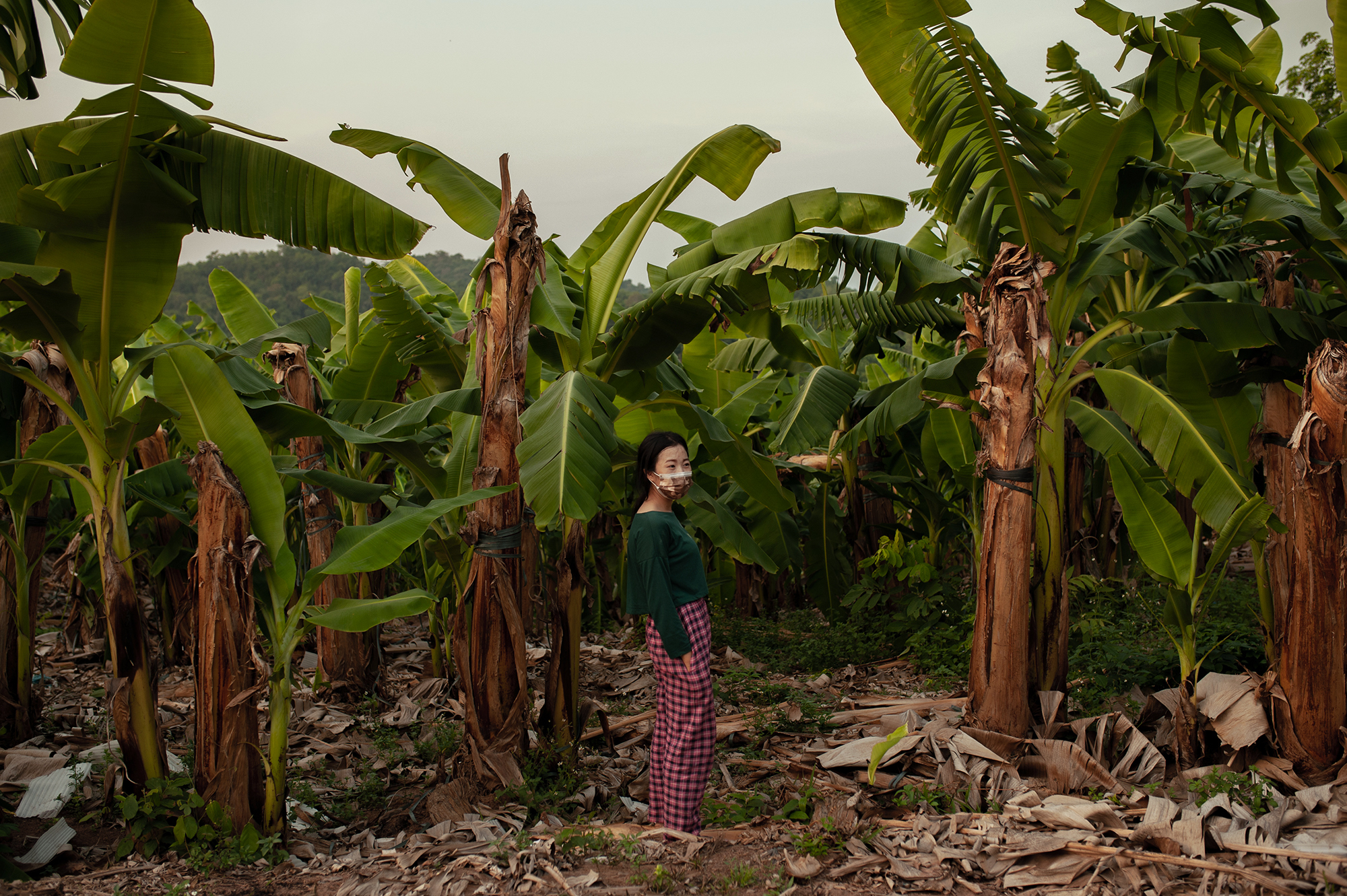 17-year-old Pie was a grade 10 student when she decided to leave school to look for work in the banana plantation (Image: Visarut Sankham/China Dialogue)

“We are not allowed to go home unless someone dies. Anyone who leaves for a week or more without giving notice gets fired,” said one couple.

They receive around US$2,300 for the whole season. About half of that is given to them as an advance at the rate of US$65 every 15 days. The rest is paid in a lump sum after the banana harvest. However, this depends on the amount of bananas the couple produces. If storms destroy the crop before the harvest, workers are often not paid.

One landowner said that last year a woman he knew was looking after banana trees that were blown down by wind just before the harvest. All she was given at the end of her contract was US$13 to get home.

Workers’ accommodation is uncomfortable and very hot. A long shed made from corrugated metal divided up into about six to ten rooms not much bigger than a double bed, one for each worker couple and any children they may have. 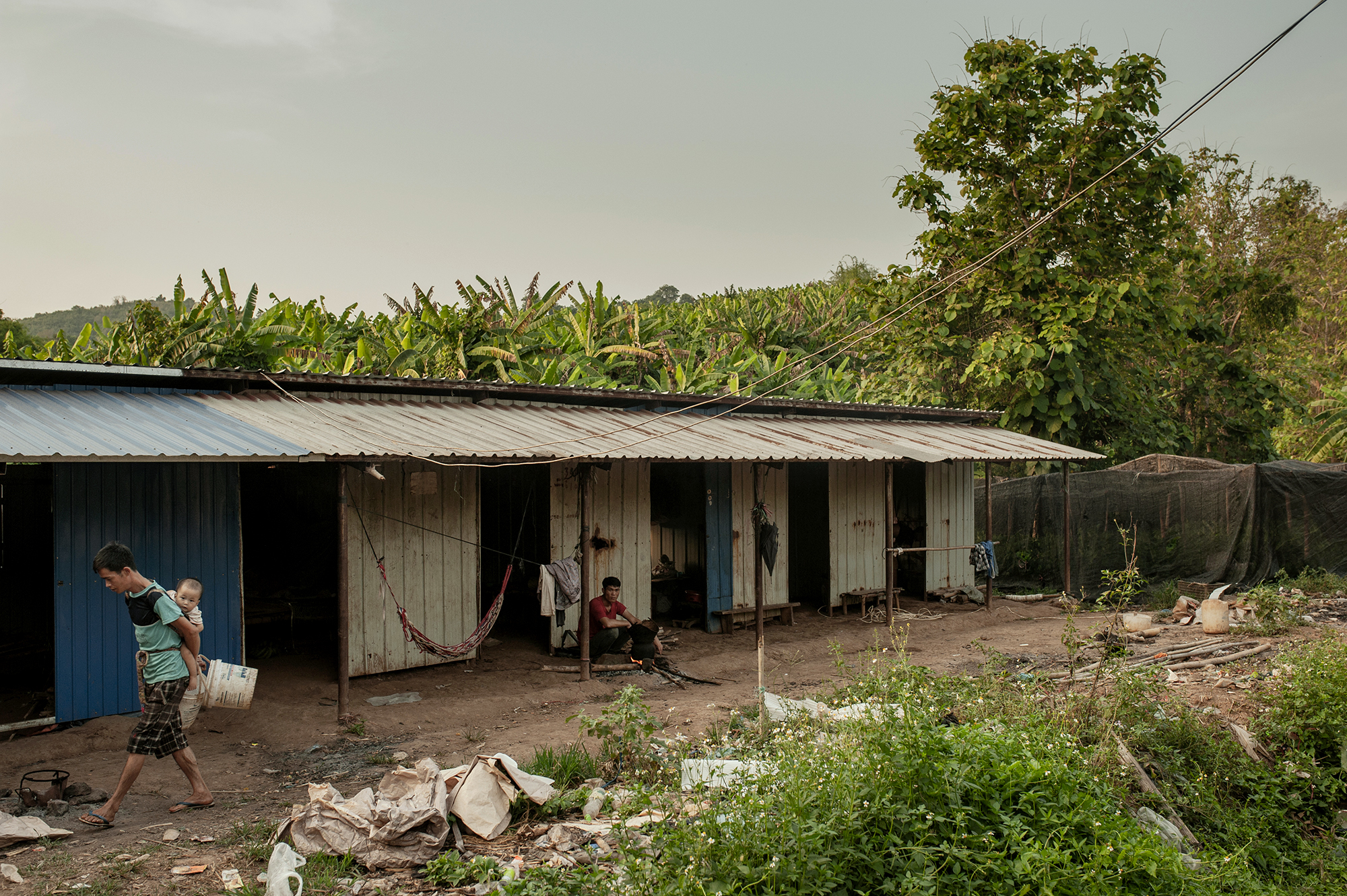 Many camps visited by China Dialogue had no toilets or showers. Workers defecate in the forest and bathe in a creek that dries up to a trickle in the hot season and is probably contaminated with agricultural chemicals.

Children under 16 are not supposed to work on the plantations, but no checks seem to be carried out. China Dialogue spoke to a 16-year-old who had been working on banana plantations since he was 14.

Older children might also help in the fields which could be particularly dangerous as agricultural chemicals usually harm children more than adults.

Casual labour is employed at harvest time for about a month. About 20 porters carry the bananas from the field to the packing area, an exhausting task. One said that the first year plantation owners offered them work, 10 people from the village took them up; the next year only one or two people re-volunteered.

They all agreed that work constructing houses was far preferable to labouring on the plantations, even though they only earn US$11 a day doing that. 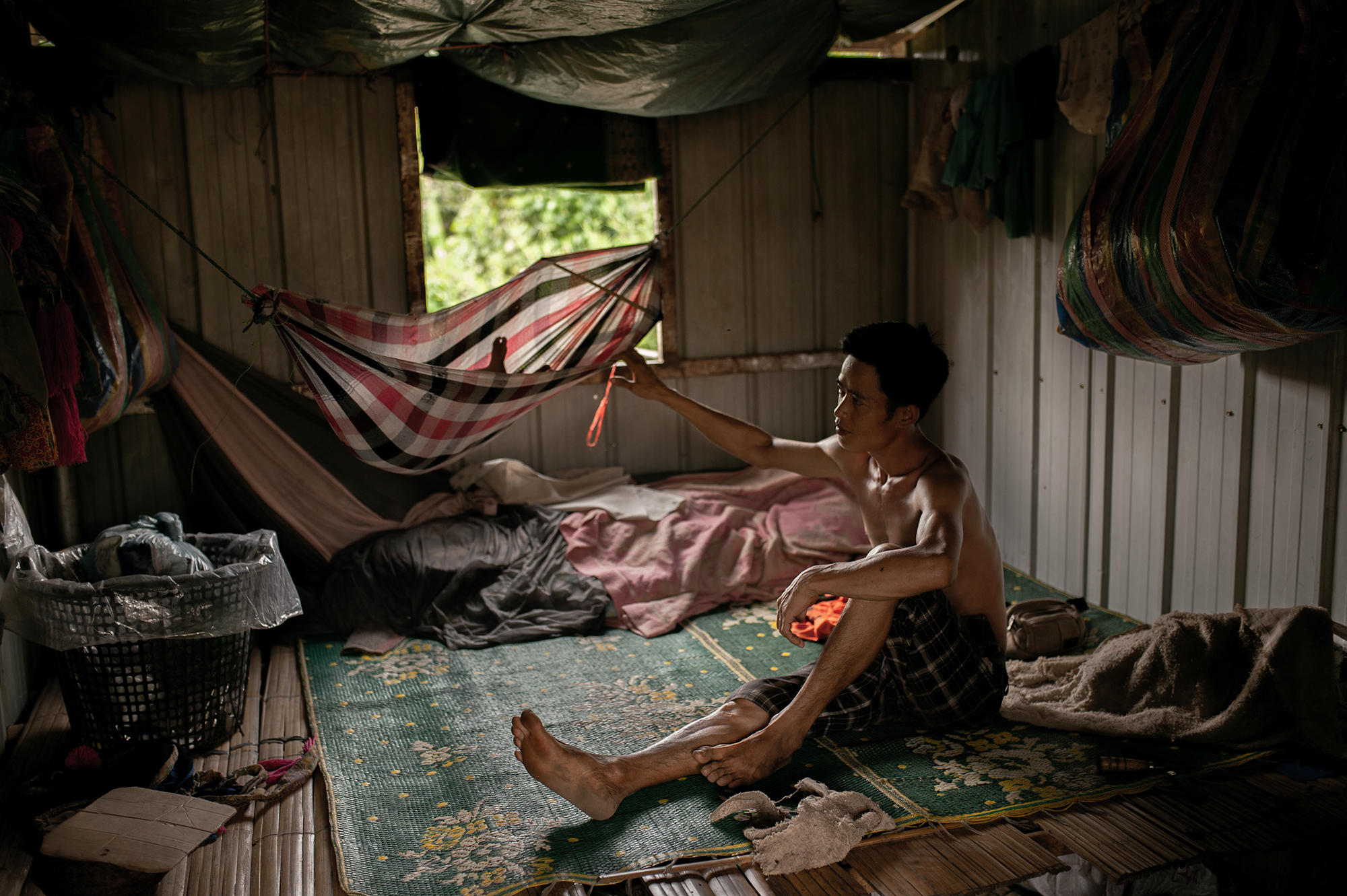 Goon, 35, has worked on banana plantations for more than two years. He now lives in the camp with his wife and his three-month-old son. They takes turn caring for the baby and working in the field. (Image: Visarut Sankham/China Dialogue)

More worryingly, it seems they were poisoned by chemicals while doing the work. One said: “My tongue went numb for about a week and the same happened to three other people I spoke to.” As soon as he said that, all the other men in the group said they had suffered from the same ailment.

Workers who wash and dip the bananas get about US$18 a day. This is still a good wage, but the work is potentially hazardous because they use chemicals and often have no protective clothing.

Despite the poor working conditions and possible long-term health effects from working on the plantations, there is no shortage of people willing to do it. 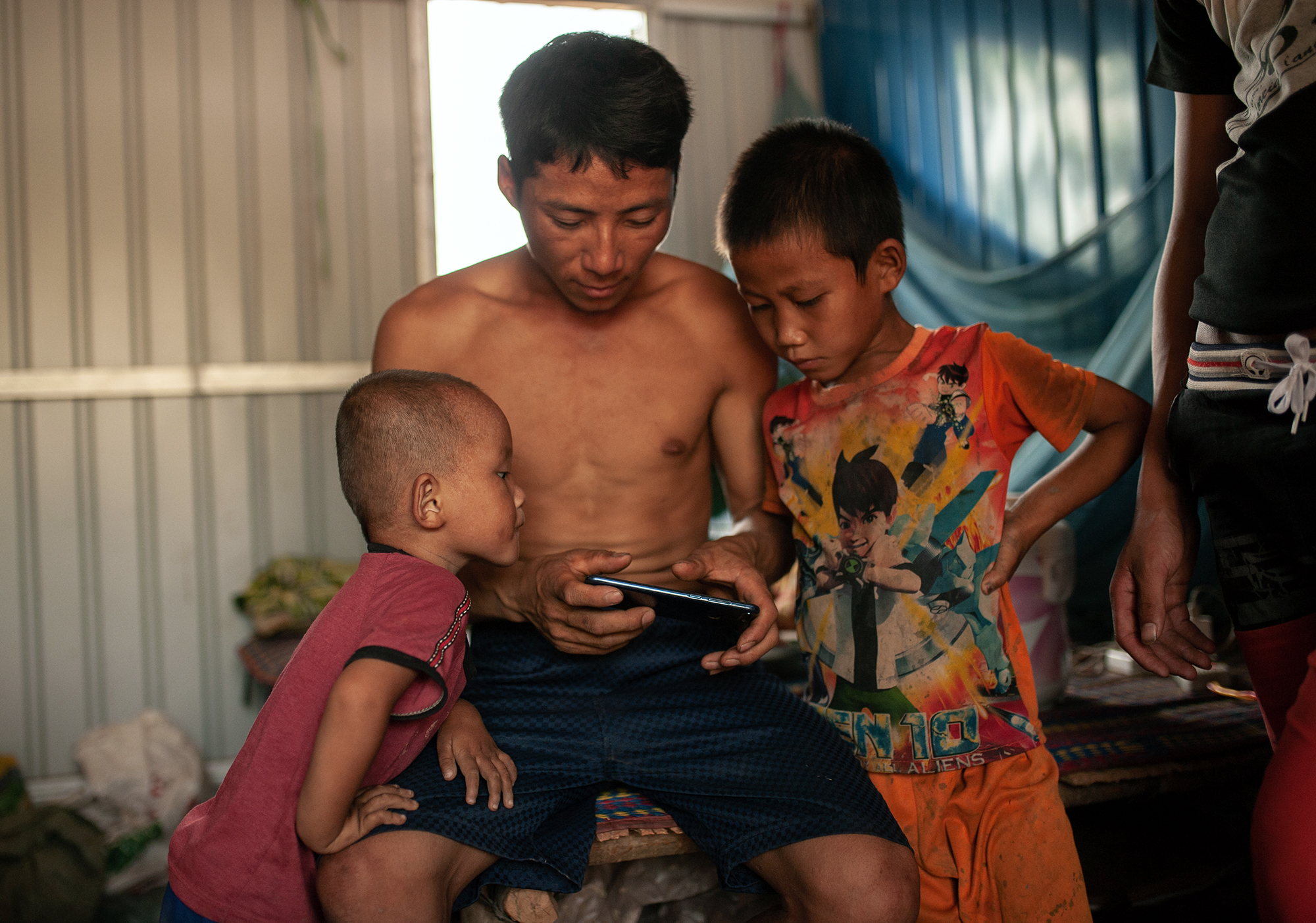 A worker and his children play a game on a Huawei phone he brought a month ago for 1 million LAK (US$100) (Image: Visarut Sankham/China Dialogue)

“There is a huge pressure to earn money,” said Ling. “People want to have phones. They want to have electrical goods now there is electricity in their villages. If somebody’s sick they want to be able to travel to hospital.”

People not directly employed on the banana plantations have also benefitted. Since the plantations started offering better wages the local day rate for rural workers has risen from US$3.30 to US$10 a day.

This is a typical development dilemma. Plan International say Chinese banana plantations provide US$28 million a year income for rural Lao households, but is this worth the costs?

As Ling said: “It is development, there is no doubt about it. If it was well-managed I can see that there are quite a lot of benefits. There are already a lot of benefits in terms of income, which makes me reluctant to say the whole thing is terrible for the environment and must be closed down. I don’t believe that.” 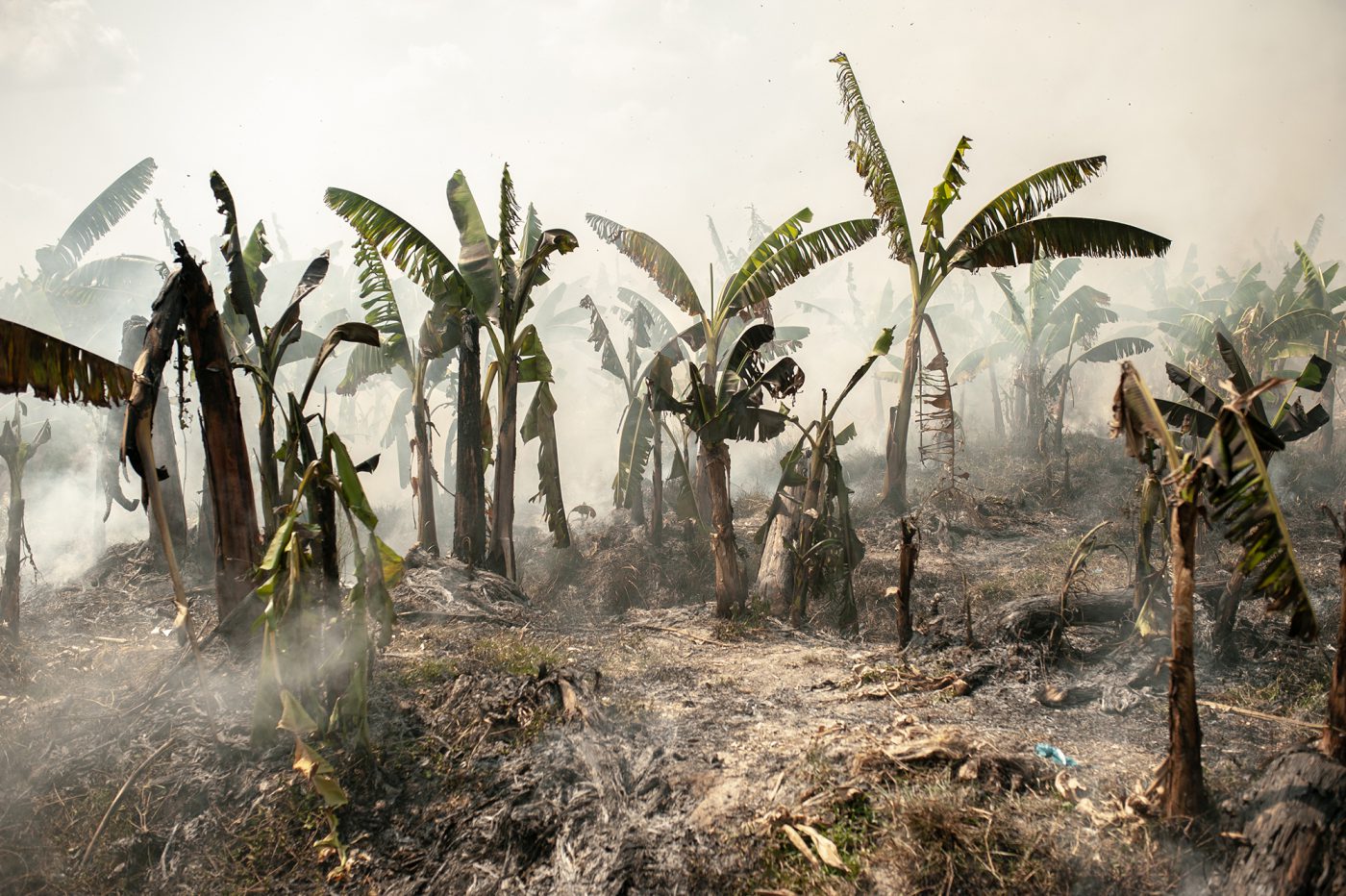