On a cold winter’s morning, 60-year-old Li Min carries a bag of food waste to a station at her apartment complex in Jinsong, Beijing. She has made the trip every two days for the last six months. A worker weighs her bag and rewards her with points. “It’s not a waste of time,” Lin explains, showing off her points card. “I’ve earned four or five hundred points, which I’ve exchanged for lots of useful stuff: toilet paper, laundry powder, cushions…”

The scheme is a response to a government push on waste sorting in cities. A plan for the compulsory sorting of household waste was published in 2017 by the National Development and Reform Commission (NDRC) and the Ministry of Housing and Urban-Rural Development (MOHURD) published. In 2018, while visiting the Changhong district of Shanghai, President Xi Jinping spoke of a “new trend” for waste sorting, elevating the issue considerably.

But some industry insiders have questioned the reward schemes, arguing that they’re unsustainable at scale and fail to encourage people to reduce waste. 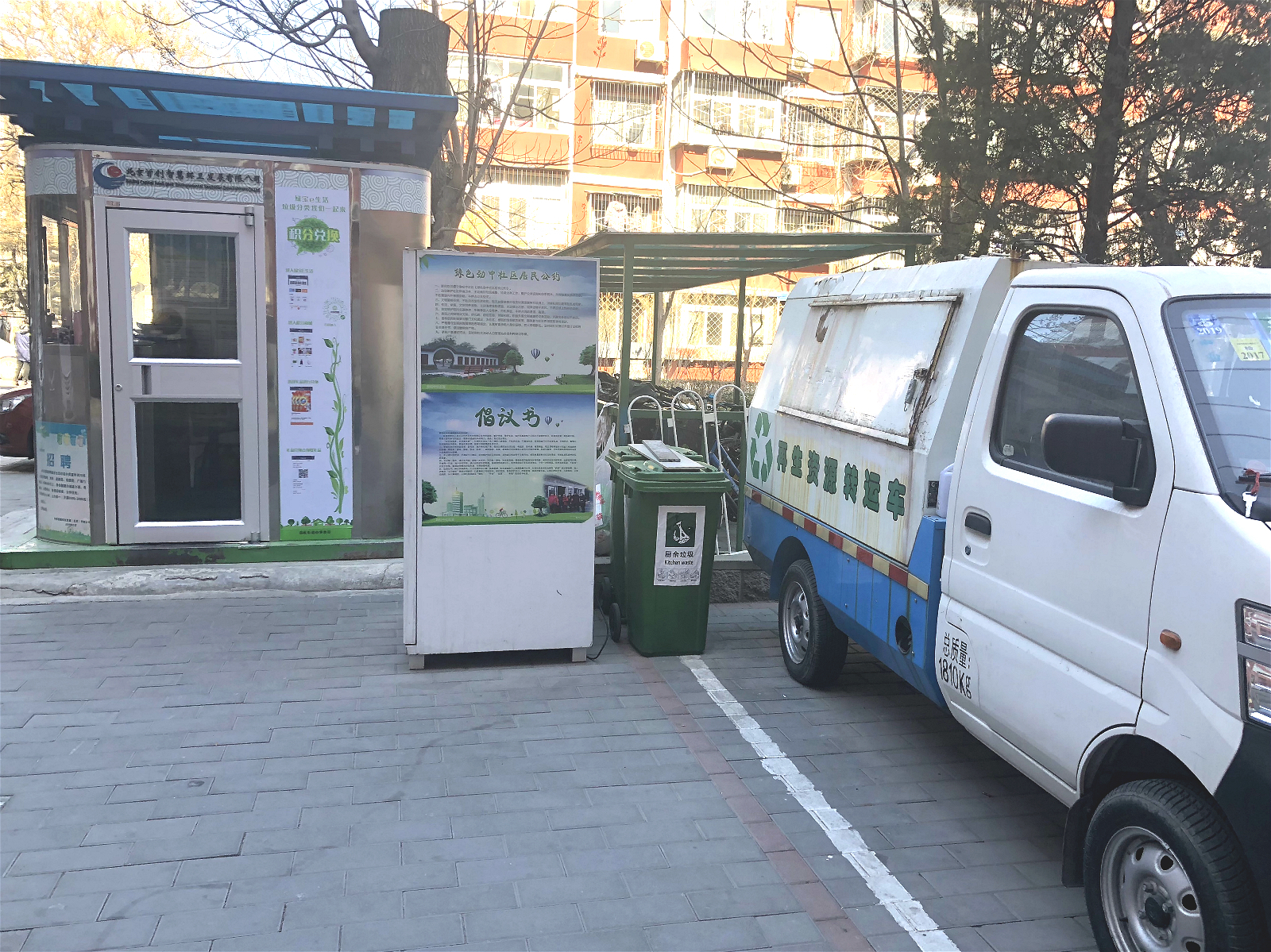 Modern waste management in China can be traced back to 1957 when Beijing Daily announced that waste would be sorted for collection. Sorting was viewed as a way to promote the recycling of scarce resources but it didn’t become official policy until the 90s. Beijing launched waste sorting trials in a number of communities in 1996. In 2000, the Ministry of Construction (now MOHURD) announced trials in eight cities including Beijing, Shanghai, Hangzhou and Nanjing.

Those early tests, which reached almost half of Beijing, mostly failed. Despite ongoing experiments, China continues to lag behind countries like Germany and Japan where recycling rates are over 50%.

In 2015, an assessment of China’s management of household waste was published by the National Academy of Development and Strategy at Renmin University. It pointed out that years of trials had not led to reductions in waste sent to landfill or incinerators. The recycling rate for paper in Beijing stood at 25% – meaning there was and is huge room for improvement.

The NDRC and MOHURD’s 2017 plan for compulsory sorting of household waste sets a recycling target of 35% by 2020.

The founder of China Zero Waste Alliance, Chen Liwen and her team have been working for years to encourage waste sorting and reduction. She told chinadialogue that the most valuable 30% of waste goes to the market-driven informal recycling sector, leaving food and other waste to be collected unsorted and sent to landfill sites, incinerators or fertiliser plants.

The consequences of inappropriate waste management are shocking. A CCTV series on the subject revealed a 120-metre-deep valley in Hangzhou filled with waste over the course of a decade. It now produces almost 4,000 tonnes of polluted water and leachate a day. Meanwhile in Beijing, incinerators are failing to keep up with the quantities of waste sent to them.

The plan for compulsory sorting of household waste sparked another round of trials. It proposed 46 local-level cities to carry out trials of third-party-run waste sorting schemes. By October last year, 104 such cities and 342 districts and counties were running trials, according to Environmental Compass.

As the plan explicitly called for “reward points” to encourage sorting, points-based systems have been widely employed. But there is no firm data yet on exactly how many of these trials are running.

Li Min’s community in Jinsong began their waste sorting scheme in 2017. According to the Beijing Evening News, 73% of the 1,167 households in the community are participating. A kilogram of food waste is worth two points, and a kilogram of recyclables 10 points. Once you accumulate 30 or more points you can swap them for household goods. 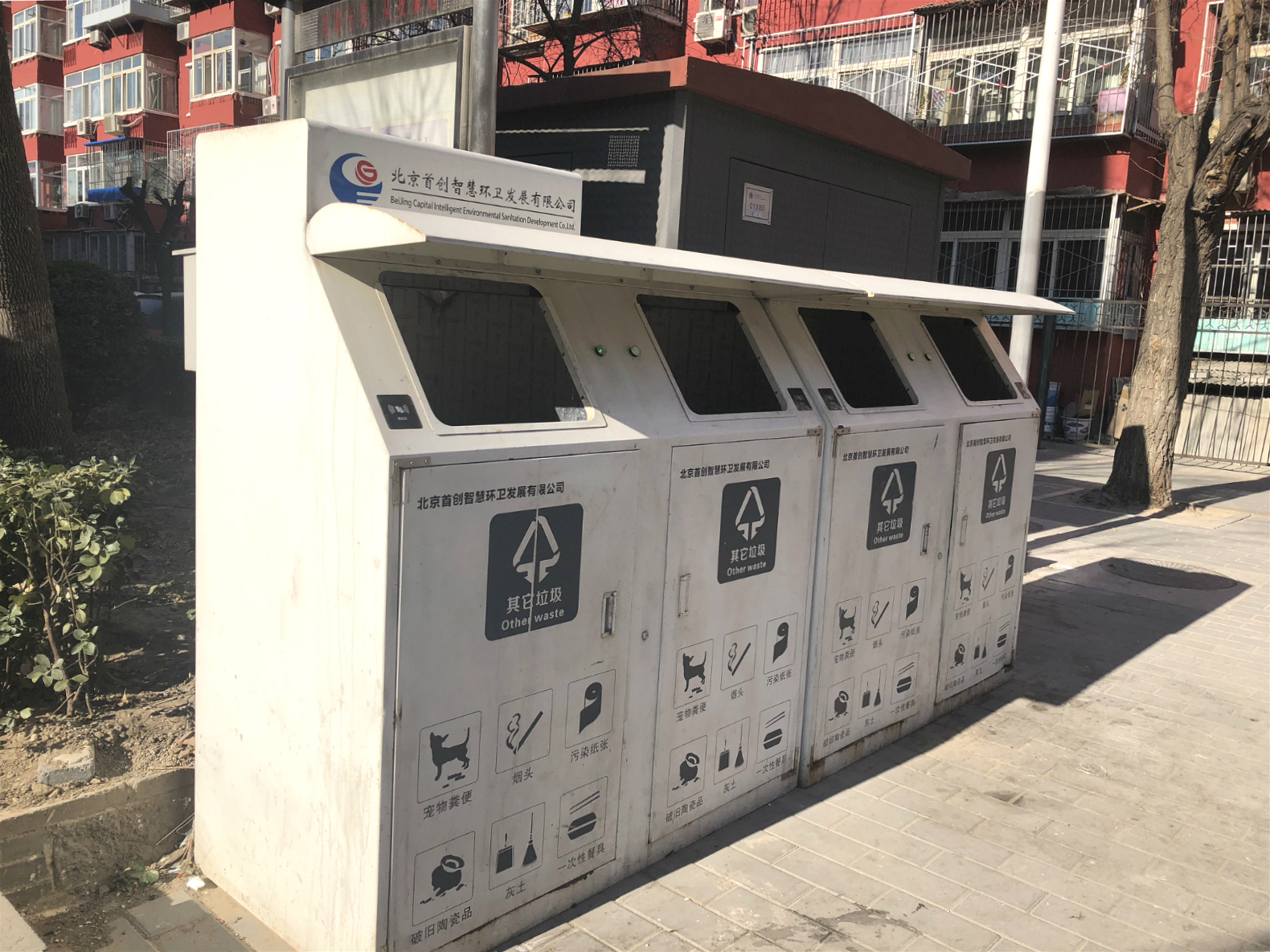 In Jinsong apartment complex No. 5, non-food waste is placed, unsorted, into these bins. (Image: Wang Chen)

More orderly disposal of waste, particularly food waste, has made the community cleaner, says Zheng Hongmei, a 45-year-old waste merchant. She says Jinsong is the cleanest place in the neighbourhood.

Sorting systems enforced through monitoring and punishments are more expensive to install and run. By contrast reward-based systems encourage public participation, aid the collection of statistics and have visible impacts. Hence city governments welcome them.

A similar trial is underway in the Wuxing district of Hanghzou, where points acquired for food waste can be swapped for eggs, vegetables and cleaning services. Meanwhile points for recyclables unlock household goods. Some other communities in Hangzhou now have “bin boss” residents who ensure neighbours sort waste properly and award them points.

Industry insiders are dubious about the sustainability of such schemes.

Song Guojun researches environmental policy at Renmin University. He is sceptical that rewards will foster the right habits and sense of responsibility: “Sorting needs to be a mass activity to achieve scale, and these incentives won’t provide the necessary coverage.”

Chen Liwen thinks the rewards go against the principle of “consumer responsibility”, saying that “financial rewards for sorting may encourage the creation of more waste, which won’t help reduce waste quantities.”

China has long relied on publicity to encourage waste sorting. But failure to sort is too widespread, and sorting systems too crude, to allow for punishments for non-compliance. How best to enforce compliance? If by fines, how large should they be?

Trials based on monitoring and punishments are also underway. In Guangzhou, regulations introduced in July last year state that those producing waste must pay for its disposal. Fines of up to 200 yuan will be imposed for failing to sort waste. This is the first set of local regulations placing responsibility for waste sorting on ordinary residents. In Shenzhen, the government has come up with a detailed plan for implementing waste sorting. They will remove bins and replaced them with drop-off points. Cameras will monitor deposits of waste, and people will be fined if they breach waste sorting regulations.

The recycling point only takes food waste from 2pm to 5pm. Fewer and fewer people are using it.”

As one Guangzhou local wrote in the Southern Metropolis Daily, “the effectiveness of fines will depend on having adequate personnel for enforcement and consistency in application. That follow-up work will be harder than passing the rules.”

Another problem is keeping waste sorted after it’s been collected. If transportation arrangements don’t keep up and do their job, waste can get mixed up again.

In 2016, China’s 214 medium- and large-sized cities produced 190 million tonnes of waste, according to the Ministry of Ecology and Environment. Transportation of this kind of urban waste has increased almost six fold in the last 30 years.

“The existing transportation systems and sorting methods are nowhere near adequate to deal with such huge and increasing quantities of waste, but that just means we need to act sooner,” said Chen Liwen. “Minor fixes won’t bring the real change we need.”

The non-compulsory sorting in Jinsong is facing its own challenges. The number of food waste stations has been cut from three to one after complaints about the smell. “The recycling point is in a corner and only takes food waste from 2pm to 5pm… Fewer and fewer people are using it,” says Li Min. She adds that elderly people don’t like the mobile phone apps that many waste sorting schemes use.

Some names have been changed.