Located in Eastern Siberia, Yakutia – a federal subject of the Russian Federation – has gigantic reserves of oil, gas and diamonds. But Dmitry (alias), from the Yakut ethnic group, talks of the dire economic situation outside the cities and amongst the indigenous communities. “There is no way to make a living here apart from hunting and fishing. And we cannot even fish without a licence now. But, there is kost’!”

Kost’ means “bone” in Russian and Dmitry is referring to mammoth ivory. Harvesting and selling it for export has given the local people a chance to earn much-needed cash. Until recently, Dmitry had a trading company that imported mammoth ivory into mainland China and Hong Kong.

Global action against trade in elephant ivory has affected those in the mammoth ivory business like Dmitry, causing mammoth ivory price to crash as trade dried up.

David Olson, director of conservation at WWF Hong Kong, explains the difference between the two ivories: “Whole tusks of mammoth are readily distinguished from the tusks of modern elephants. A cross section of mammoth tusk also has sharp growth patterns compared to that of recent ivory. At times, mammoth ivory has inclusions of a particular mineral that fluoresces under violet light. But, when cut into smaller pieces and trinkets, it can be difficult to tell.”

Alexander, a professional ivory carver from Yakutia, who produces souvenirs and gifts, such as USB sticks and cufflinks in the form of miniature stormtrooper helmets, says that even though mammoth and elephant ivories are very different, high-quality mammoth ivory from the very core of the tusk can be passed off for elephant, unless experts are involved.

The last woolly mammoths on the territory of today’s Russian Federation died out less than 5,000 years ago after their main habitat – the vast northern steppe also known as mammoth steppe – disappeared because of climate change. Similar in size to African elephants, mammoths often had much longer tusks that twisted like a corkscrew – thought to be handy snow-clearing devices when feeding in winter during an ice age.

Over hundreds of thousands of years, mammoth herds in Siberia left behind a vast quantity of tusks, locked in permafrost – the ice layer below the topsoil. 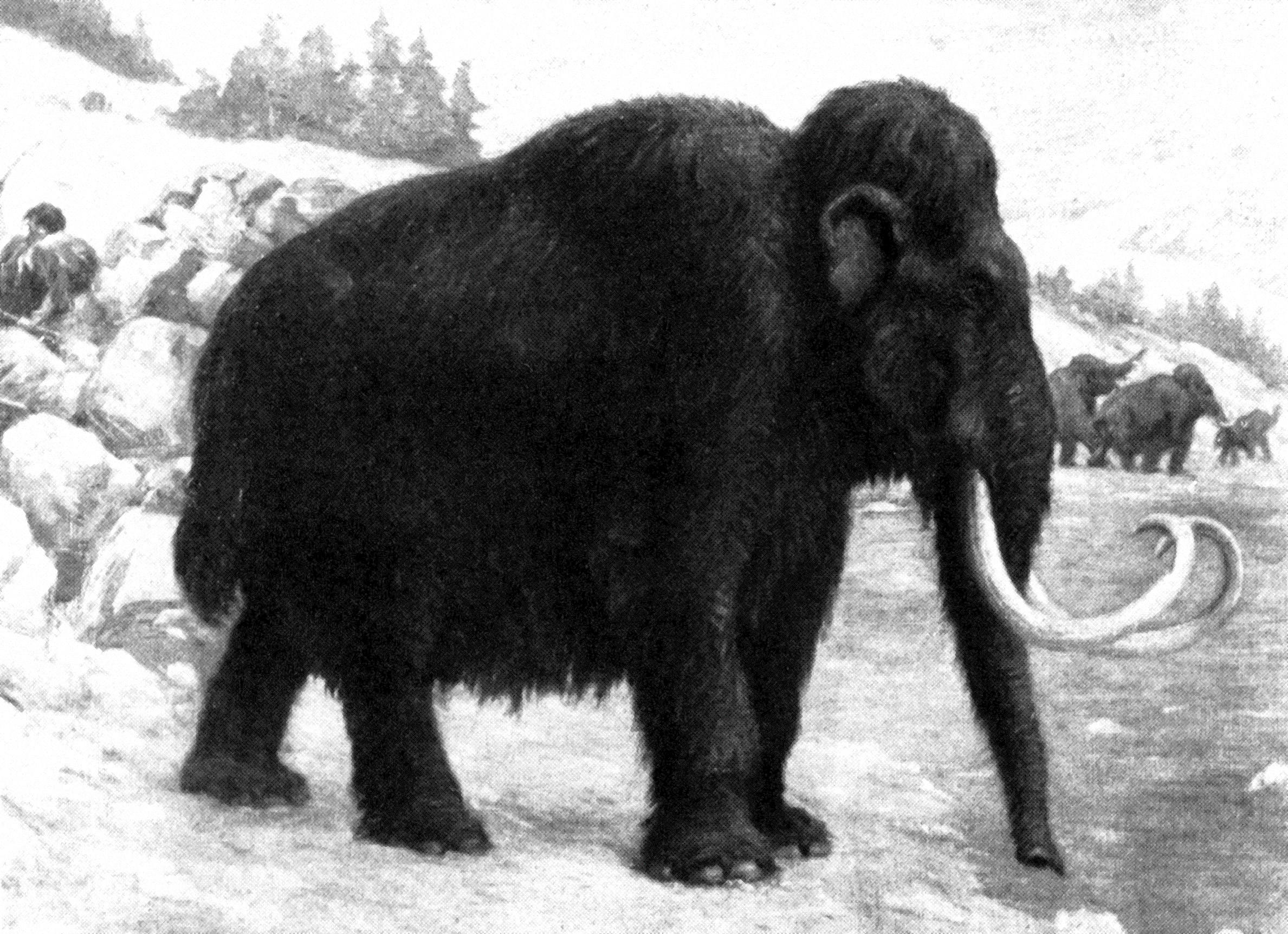 A 1915 illustration of a woolly mammoth. They lost their main habitat in Siberia to climate change, leaving tusks preserved in permafrost. (Image: Alamy)

Global warming is now thawing out the permafrost and mammoth tusks are floating up to the surface. People are also digging into the permafrost to find them.

The majority of the world’s mammoth ivory comes from Yakutia. According to the Russian media, before 2018 more than 100 tonnes were exported each year. Of that, 90% is destined for China because of the sheer size of the market and the ancient tradition of ivory and bone carving. Russia regulates the harvesting and exports of mammoth ivory, but a third of the trade is thought to break the law somehow.

For years, the enthusiasm for mammoth ivory export, fuelled by Chinese demand, ran so high in Russia that in 2012 there was an official proposal to classify the country’s mammoth ivory reserves together with those of oil and gas.

Eager to lock the burgeoning Chinese business into one official channel, in 2018 the government of Yakutia announced plans to create a Russian–Chinese monopoly on harvesting and export. Nothing has so far come of these plans.

According to Russian law, only ivory that is already on the surface can be collected but the Siberian seekers of mammoth ivory pay no heed to this. They use powerful water pumps to smash and thaw the permafrost and unlock the ivory inside.

“Conservationists complain, they say it pollutes rivers. But the damage done is not even worth mentioning when compared to what gas and oil people do here!” says Dmitry. Yakutia is a major producer of hydrocarbons, for export around the world. Many ivory harvesters, Dmitry adds, get into heavy debt to buy the fuel and equipment necessary for a season of harvesting ivory, then fail to find enough and lose everything they have.

Once the tusks are collected the harvesters sell the ivory to traders. The Russian-language internet is full of trading company sites that offer legal export of mammoth ivory from Russia to anywhere in the world.

At the end of summer, Chinese traders travel deep into Siberia, says Dmitry, to meet with brigadas – teams of workers harvesting ivory. Brigada will by then have done months of back-breaking work in the wilderness.

Then comes the main hurdle – getting the ivory out of Russia.

“There are no elephants in Russia” chuckles Dmitry, “but you must get a certificate that the ivory is from a mamont (mammoth) and not from a slon (elephant).”

“Before it can be exported, it must undergo expert examination to determine that it does not have cultural heritage or scientific value. You must also declare the exact place where it was collected, the vehicle it was transported out of the forest on, what flight it then was on… The whole process, for one shipment, takes about two months.”

The controls are getting stricter and stricter, he adds. In November 2020, four tons of mammoth ivory were confiscated by Russian customs for incorrect paperwork. The exporters had under-reported the high quality of the ivory, which made it of cultural value.

Quality can vary greatly, because every mammoth tusk has a unique history of several millennia in the ground.

Dmitry had to close his own mammoth ivory business in Hong Kong when the demand for mammoth ivory nosedived after China’s elephant ivory trade ban in 2018. The ban was strictly enforced. Outlets trading in ivory and carving workshops where shut down in a nationwide crackdown, driving down both elephant ivory prices and the enthusiasm of Chinese buyers.

The ban also affected the mammoth ivory trade, explains Dmitry. “In China, this trade is under a microscope now and people are worried about buying mamont ivory. When we were selling it on Taobao, customers would ask us – can I be sure this is not from an elephant? Will I get in trouble for buying this?” 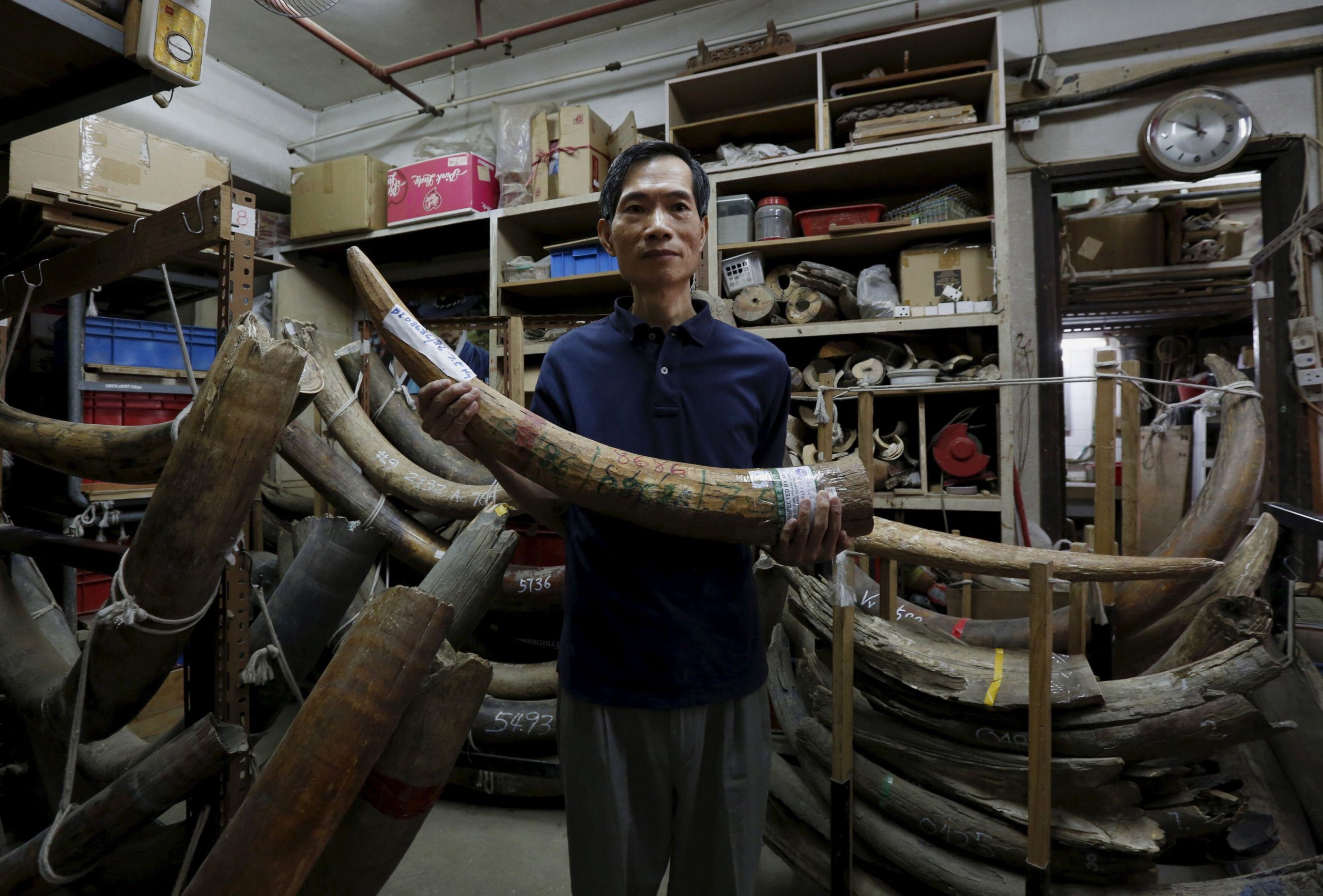 A worker at a carving and jewellery factory poses with an elephant tusk in between mammoth tusks in Hong Kong, in 2015. The business used to be lucrative, but many Hong Kong outlets and workshops closed after China’s 2018 ban on the elephant ivory trade. (Image: Bobby Yip / Alamy)

According to Dmitry, the first fall in price after the peak was due to oversupply driven by Chinese traders travelling to Yakutia to buy ivory in bulk.

Some expected that, with elephant ivory bans in place, legal mammoth ivory would become a substitute for illegal elephant ivory, soaking up pent-up demand and driving prices back up. Dmitry dismisses the idea, saying that mammoth ivory simply does not have the same appeal:

“This is a fengshui sort of thing – mamont went extinct, so it carries a kind of bad vibe. Slon ivory is beautifully white, but mamont is always a little yellowish. When mammoth ivory is worked, it can even smell like rotten teeth! While there are still slon around, people will buy slon. Mamont ivory is only for those who are into it – aficionados.” 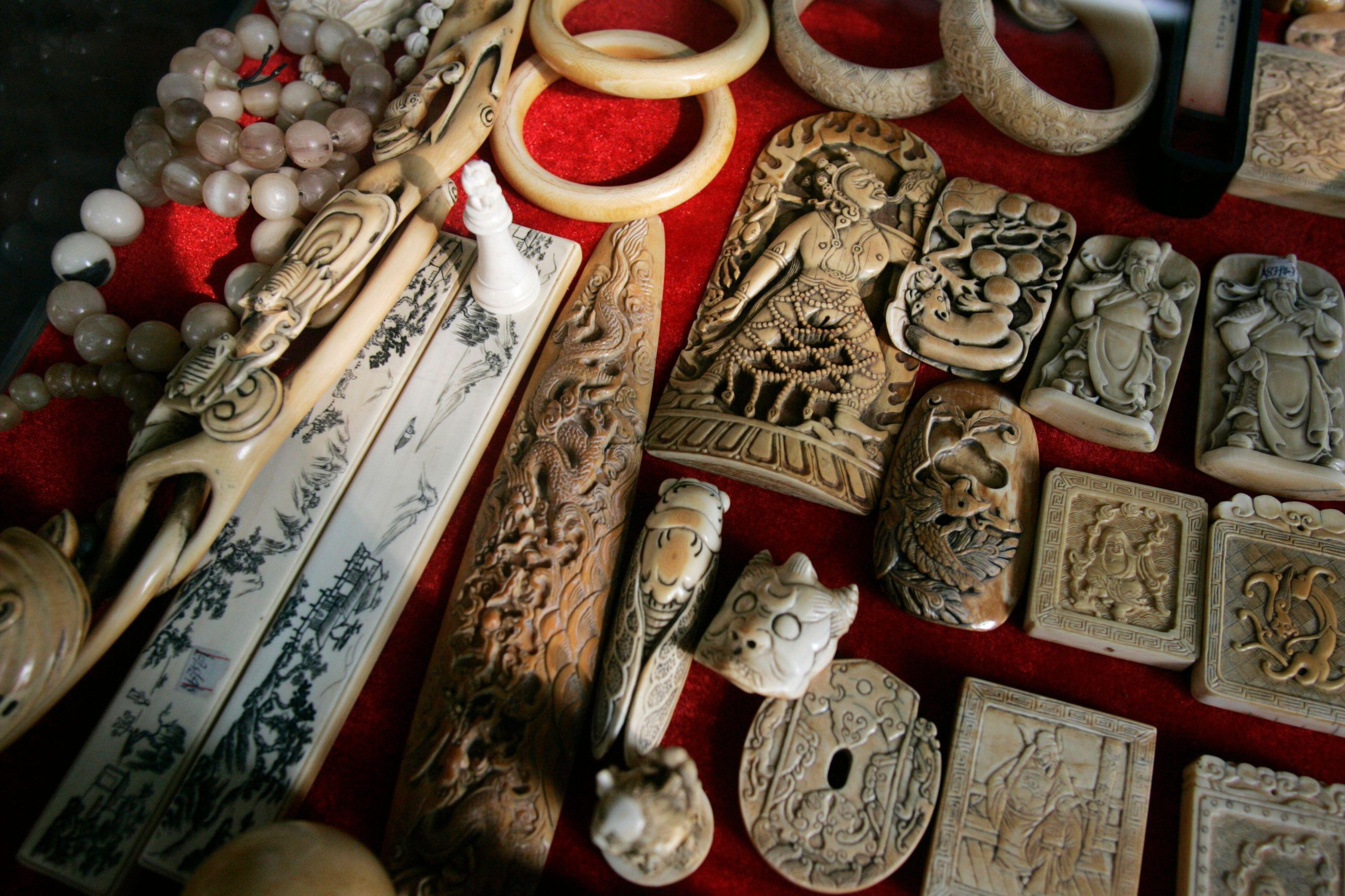 In more bad news for the mammoth ivory traders, the taps on the supply of Siberian mammoth ivory are closing. In October last year, the government of Yakutia announced a sweeping new law: from 2021, mammoth tusks, including those from an animal that was over 100kg, any intact tusk, or one of more than 3 metres long, will be considered of cultural and scientific value and not allowed to be exported. Ivory harvesters bitterly complain that practically all ivory worth exporting falls under this law.

Olson  said: “We know of cases where doctored shipments of legal mammoth ivory are used to transport illegal ivory from recently killed African elephants. We are trying to gauge how much this illegal practice might increase as ivory bans are applied.”

The permafrost is releasing not only tusks and bones, but occasionally woolly mammoths nearly in their entirety. Some are so well preserved that the idea of resurrecting the species from the DNA is not entirely in the realm of science fiction. Several scientists have been working on bringing the species back through cloning.

Last year, woolly mammoth – Mammuthus primigenius – came close to joining the living species again, at least on the pages of CITES Appendix II. Because of growing concerns about mammoth ivory being used for laundering elephant ivory, a formal proposal was made by Israel to include the woolly mammoth.

The proposal failed to pass. The CITES committee judged that there was insufficient evidence of elephant ivory being laundered as mammoth, adding that the inclusion of mammoth would result in smuggling of mammoth ivory, creating an “enforcement issue where there previously was none”, and “taking resources” away from efforts to save living elephants.

Had the proposal succeeded, Mammuthus primigenius would have become the first ever endangered extinct species, which says a lot about the state of the natural world today.

China’s green Belt and Road tested at the Russian border