Much media attention in Myanmar is focussed on China’s apparent efforts to revive the stalled Myitsone dam, its role in advising the Myanmar government on developing a new hydropower strategy white paper, and the implications of these developments for the adoption of the World Bank-led strategic environmental assessment of Myanmar’s hydropower sector, which was released in late 2018.

The debate appears to revolve around the assumption that the country must choose between a strategy for large hydropower development supported by western donors and the World Bank or one supported by China. While its contents are unknown, there is concern that the white paper may push forward highly environmentally and socially destructive projects such as the Myitsone dam and the series of mega dams proposed for the Salween River main stem (also known as Thanlwin), each involving Chinese companies and financiers. But is this assumption right?

The long-awaited environmental assessment recommended not building dams on the main stem of five major river basins, including the Ayeyarwady and Salween. This would remove the controversial Myitsone and the Salween main stem dams from Myanmar’s energy development plans, which have been fiercely opposed by civil society groups. Government adoption of this recommendation would reflect sound science on the adverse ecological impacts of large hydropower dams on mainstream river systems and provide critical recognition of the multiple values – ecological, social, economic and cultural – delivered by these rivers.

What we need is peace, not dams

At the same time, the environmental assessment still anticipates a significant role for large hydropower dams in Myanmar’s future energy mix to address pressing domestic power demand and for export to neighbouring countries. Sixty percent of Myanmar’s population has no access to electricity and the government has ambitious targets for 100% electrification by 2030. But this includes the possibility of building large dams in areas suffering from past and present armed conflict. The majority of large dams are targeted for ethnic minority states in regions where fighting is ongoing or the peace process has stalled. This means there is no way forward for building local autonomy and participatory decision-making over natural resource management and use. Concerns over the negative impacts of large dams and their potential to exacerbate or even drive conflict has prompted many community and civil society groups to boycott the environmental assessment.

“We’re fine with our livelihoods. We can feed our families. There are rivers, forests and natural resources to secure our future. But we’ve been in active armed conflicts for over seven decades. Dam projects, big or small, will create a burden for us. What we need is peace, not dams,” said Saw Tha Poe, a Karen environmentalist from the Salween River when we met recently in Yangon.

Despite efforts by proponents to portray the socio-economic benefits of large dams as outweighing costs, local people in Myanmar are only too aware of the detrimental consequences of these projects on communities and the environment. Dams constructed during military rule, such as the Lawpita hydropower plant on a tributary of the Salween in Karenni state, have uprooted tens of thousands of people and been linked to forced labour and human rights abuses by military personnel deployed to protect the sites.

In 2011, a vibrant grassroots campaign successfully secured the suspension of the Myitsone dam. An independent review of the project’s environmental impact assessment, supported by International Rivers, echoed community concerns and demonstrated the ways in which the study had significantly downplayed the impacts of the dam on the river’s downstream flow and sediment regime, fisheries and aquatic biodiversity, and its implications for food security, livelihoods and public health, while overstating benefits. Following the project’s suspension, the communities already resettled for it remain in extended limbo. Denied adequate compensation or means to restore and rebuild livelihoods, they continue to wait in hope of return to the villages and lands they lost to involuntary displacement. 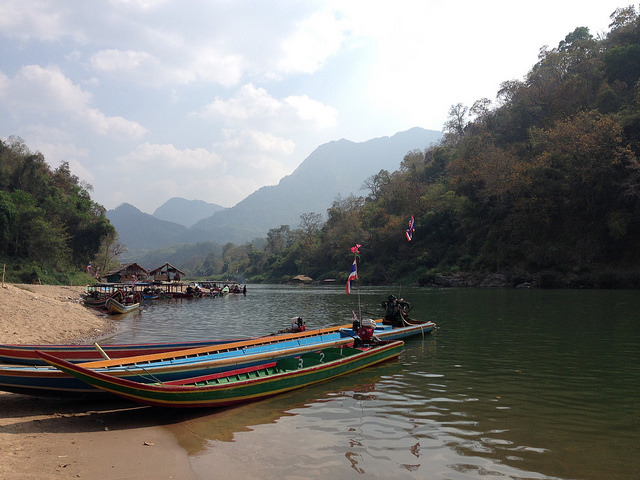 The Salween flows through the Three Parallel Rivers World Heritage Site, which is home to 7,000 plant species and 80 rare or endangered animal species (Image: International Rivers)

Myitsone as a decoy

Yet an exclusive public focus on Myitsone risks obscuring other harmful large dam projects that are quietly moving forward, absent public information or transparency. The environmental impact assessments for the 1,400 megawatt Kunlong and 1,200 megawatt Naopha dams on the Salween River in Shan state have recently been completed and submitted for review. Both projects are located in sites of active or historic armed conflict. Both have prompted concern from local communities over land that would be inundated for reservoirs and the downstream impacts on the river system. The assessments have not been made publicly available, despite revisions to Myanmar’s environmental impact assessment procedure, to improve information transparency.

The latest hydropower white paper is equally opaque, with little information in the public domain on its contents or drafting process. The strategic environmental assessment, while emphasising broad and extensive stakeholder engagement, has significant limitations in its reflection of local views. Led by the International Finance Corporation, the World Bank’s private sector lending arm, the study is in keeping with its mandate to support the hydropower sector. It assumes a significant role for large dams without a wider assessment of the country’s energy and export needs and different options available for meeting them. The assessment also failed to engage many local stakeholders or enable broad participation. Most documents were only made available in English. Many people we spoke to felt that they were not given enough time to provide input to the process. Others who attended consultations reported that their concerns were omitted from meeting reports. Large numbers of people already displaced by fighting from areas targeted by dams were not involved.

Local people have their own set of demands. They are calling for transparency, public participation, and meaningful decision-making power in resource governance. Many also have pressing energy needs. As mentioned, only an estimated 40% of Myanmar’s population currently has grid access. But most large dams are designed to transmit power for export or to urban and industrial centres rather than local communities. Large dams on the Salween were designed to export power to Thailand and southern China, where there is currently significant overcapacity and little need for new electricity imports. There are also thousands of decentralised off-grid and very small power plants that are already helping to serve local needs, yet the role of these, and the potential for expansion of new, affordable, appropriate technologies is largely ignored in leading energy plans.

A variety of energy and development pathways exist for Myanmar, but these have not yet been systematically studied. A pathway to peace and environmentally-sound development requires the country’s energy planners to listen first and foremost to her people.

The river ‘is not for sale’ warn Mekong villages