Commonly known as the oil palm, Elaeis guineensis and its many component parts have been used by humans since at least 3000BC. Originating in West and Central Africa, about 44 countries now use the plant to produce palm oil. 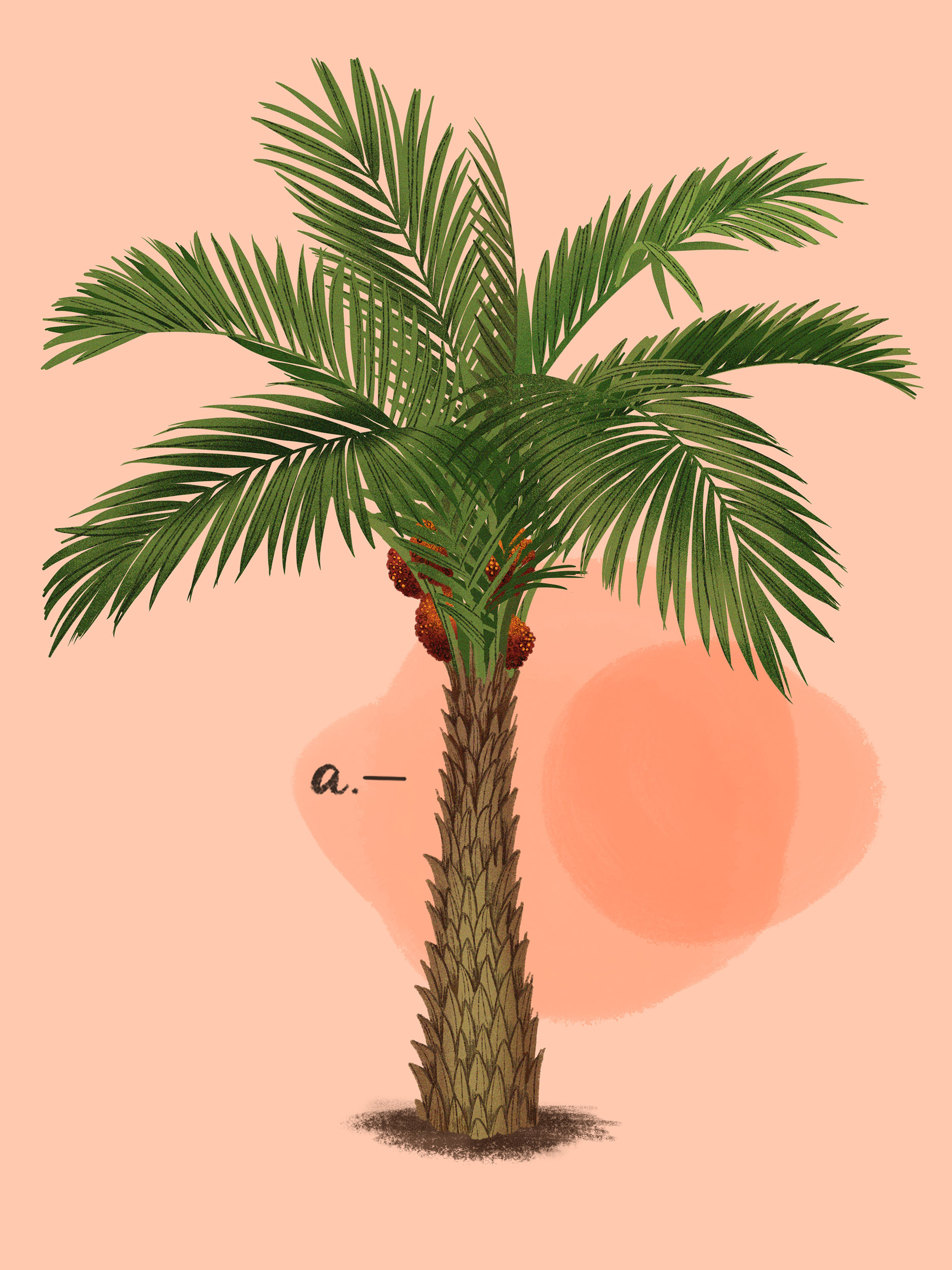 Palm oil is the most widely used vegetable oil in the world, with 76 million tonnes produced globally in 2019. Despite this, oil only accounts for 10% of an oil palm’s biomass.

So, what do we know about the other parts of this tropical crop, which is not actually a tree, but a large, woody herb?

The economic lifespan of an oil palm is around 25-30 years, after which the yield decreases and the palm becomes too tall to harvest efficiently. Once passed their prime, mature palms are felled to make way for new ones.

Uprooting the palms often involves the use of heavy machinery or illegal slash and burn practices that severely disrupt the soil, making it vulnerable to erosion and less able to absorb water. This increases the risk of major flooding to surrounding areas during periods of heavy rainfall.

The presence of heavy machinery also reduces the soil’s ability to store water and oxygen, leading to anaerobic conditions that cannot support the nutrients and organic matter that drive decomposition and keep soil healthy. 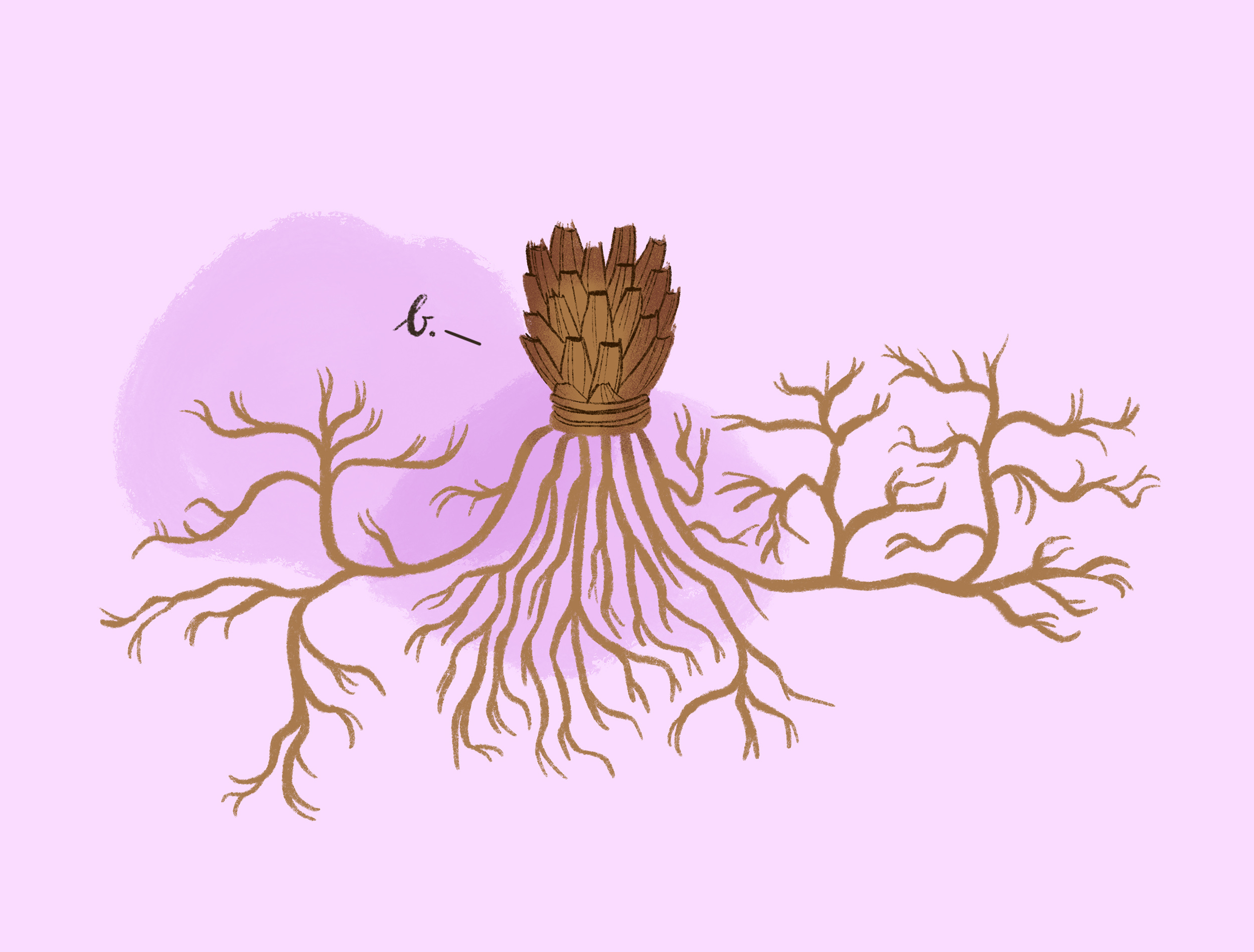 Though it is now against industry best practice, many new plantations were historically established on peatlands, which were cleared and drained, destroying rich ecosystems and vital carbon stores.

The impacts of plantation activity extend from below ground to nearby water sources. Agrochemicals, such as fertilisers, pesticides and herbicides, are used on palm oil plantations. Chemical run off into nearby streams, rivers and lakes can stimulate the production of algae, which grow rapidly and starve other aquatic life of oxygen, in a process called eutrophication.

Oil palm plantations are incredibly water intensive, with an average oil palm in Malaysia using around 100 litres of water each day. Some 243,000 litres – or a tenth of an Olympic swimming pool – is required to produce a tonne of fresh fruit bunches.

When they are three years old, oil palms begin to bear around a dozen giant fruit bunches that can each weigh up to 30kg. Up to 3,000 individual oil-producing fruits grow from the spine of these vibrant bunches. Oil palms provide a constant yield, as each individual palm produces harvestable fresh fruit bunches every two weeks. 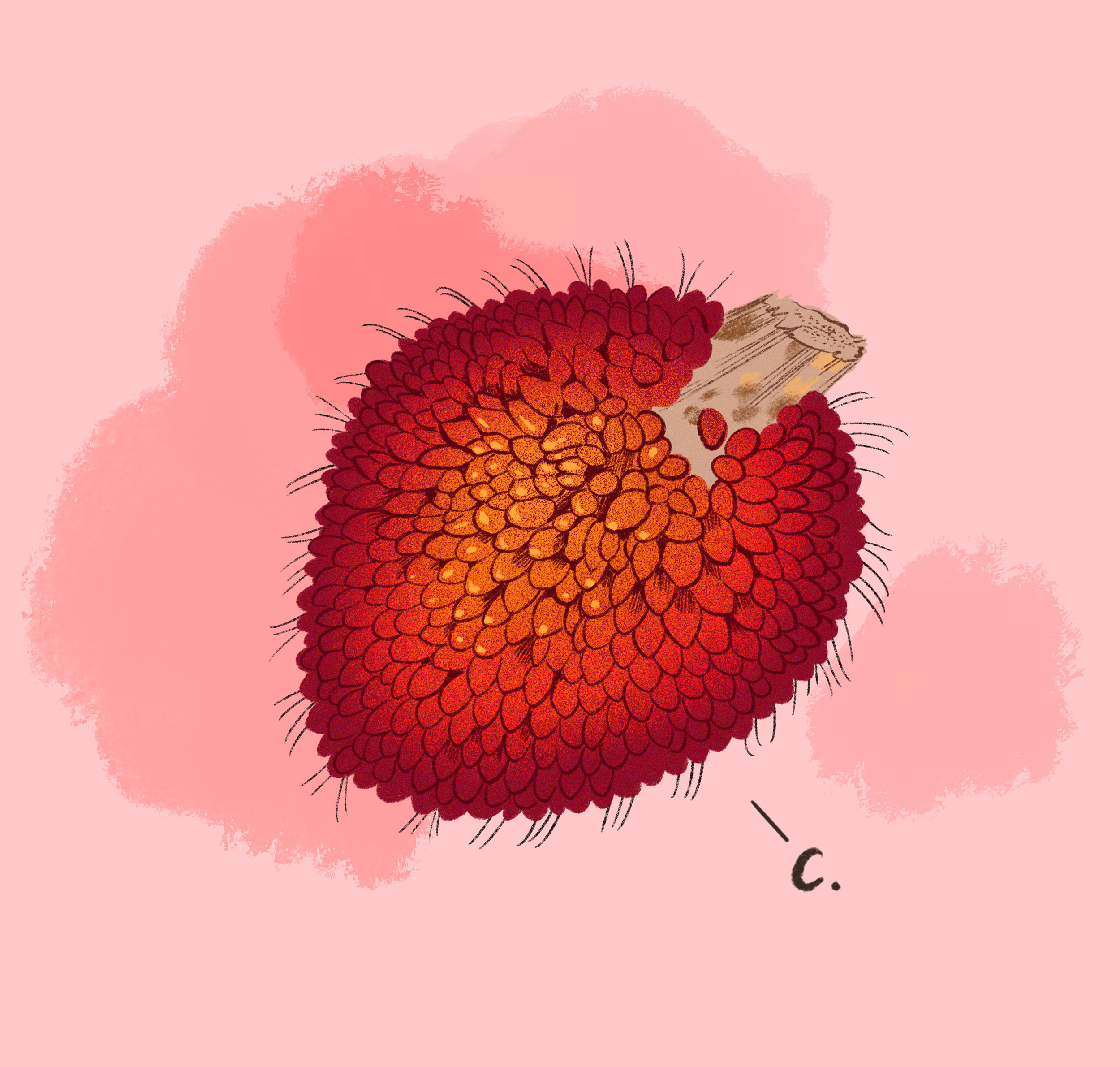 The journey of independent smallholder farmers often ends with the fresh fruit bunch, which they sell on to local mills for processing.

At the palm oil mill, the harvested bunches undergo a threshing process, separating the fruits from the bunch. What remains is the skeleton of the fruit bunch, which can be recycled to form mulch or utilised in the production of biofuels. However, current methods are often costly, making processing for smallholders difficult.

Historically, the unruly fronds of the oil palm have been used by humans to weave artisanal baskets, make roofs for homes, or heal wounds using traditional medicine. But the mass production of oil palm has changed this, and fronds are discarded daily as waste. 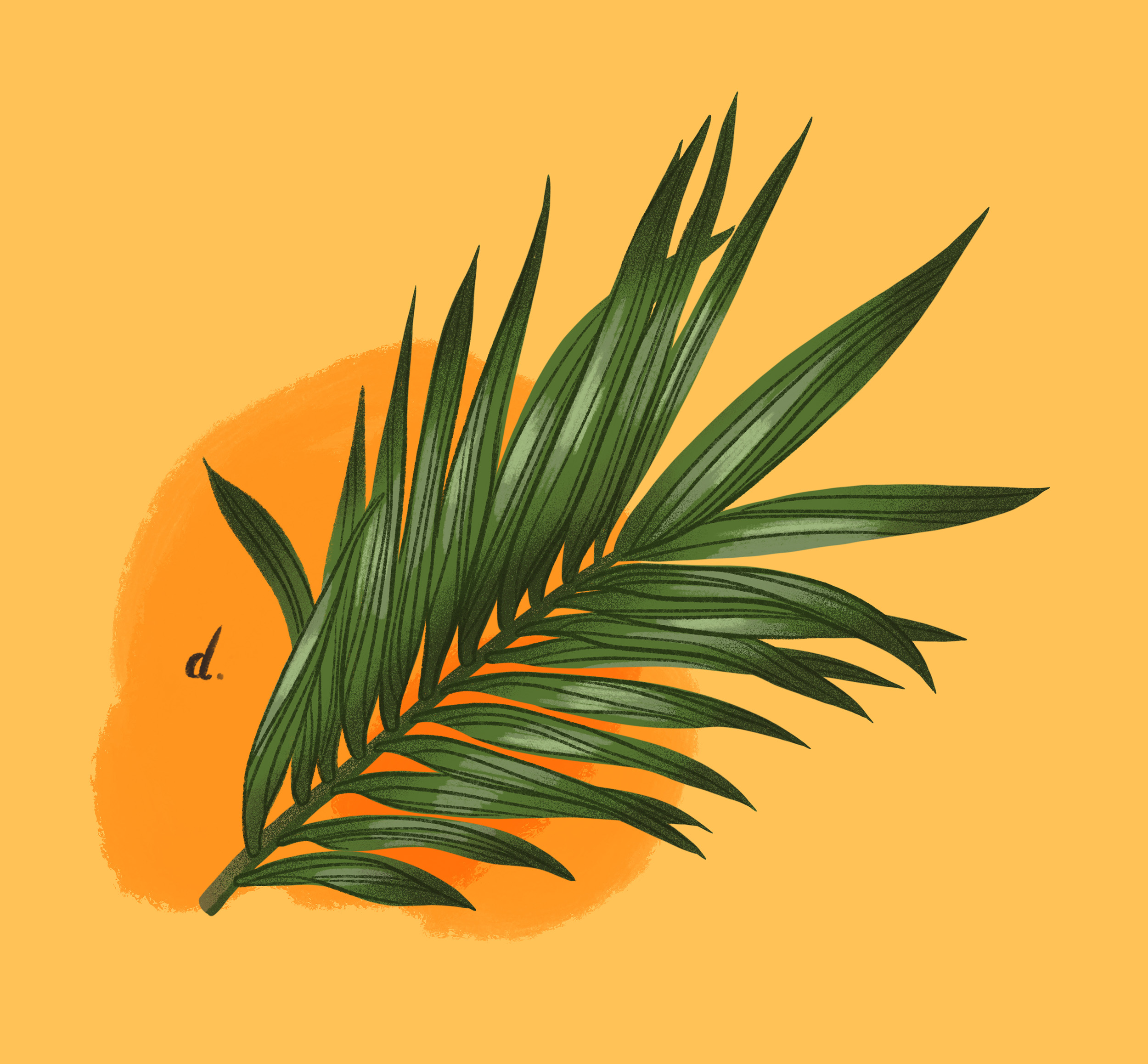 Oil palm fronds are on average three metres long, with around 24 fronds per tree being pruned each year, accumulating a huge amount of biomass.

Inventive ways to utilise excess oil palm fronds beyond mulch and biofuel are commonplace on plantations. Through meticulous laying and stacking of fronds among the rows of oil palms, they begin to rot, producing a shield for moisture retention in the soil, as well as reducing pest attacks and replenishing the soil with nutrients.

In many plantations these frond stacks are the only vegetation on the ground and can provide a much-needed habitat for animals living in the oil palm landscape. Cobras, monitor lizards, invertebrates and rodents are commonly found in these frond piles. 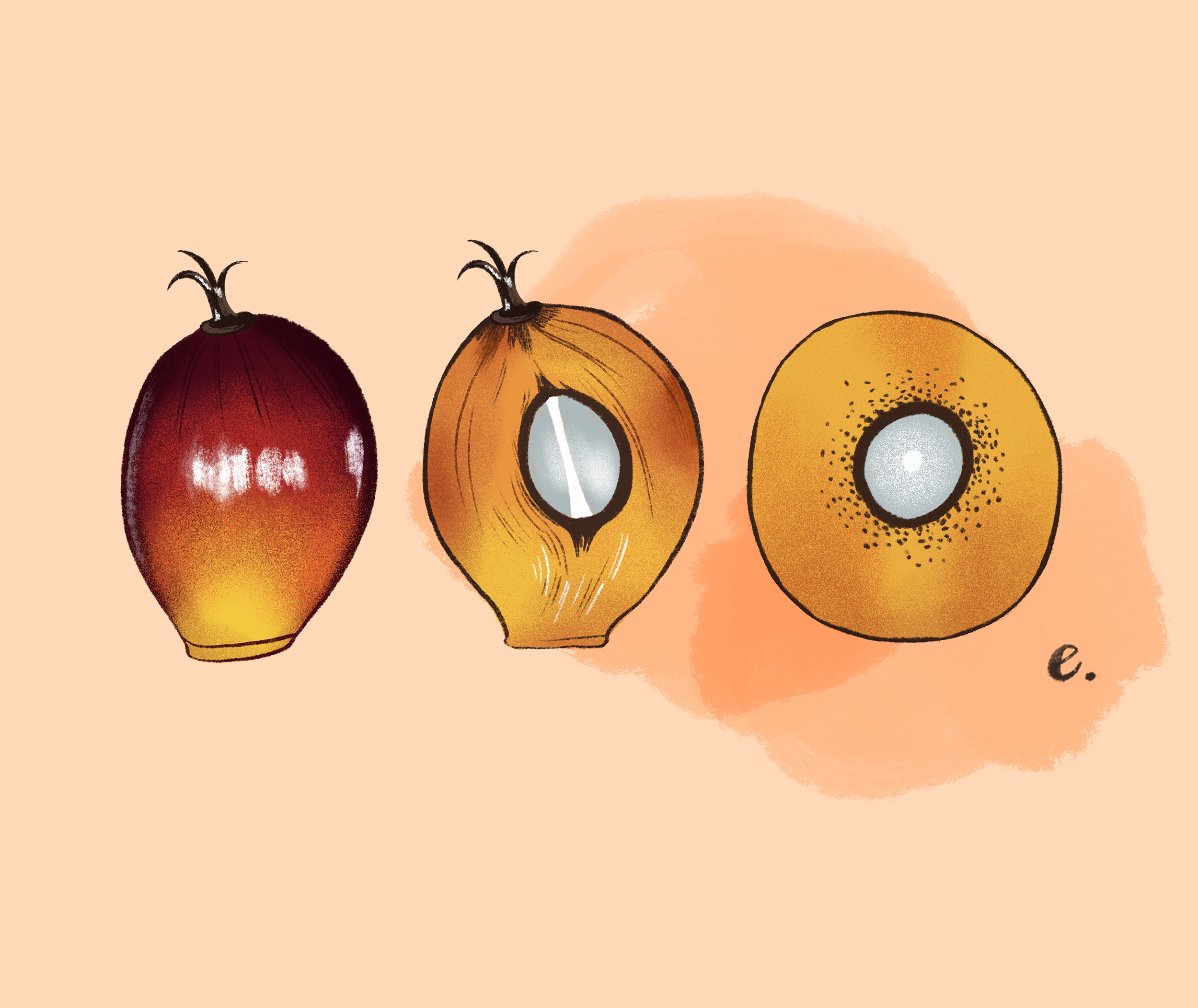 The African palm weevil (Rhynchophorus phoenicis) is the pollinating insect of the oil palm and is vital to producing fruitful yields. Before it was introduced to Southeast Asia, oil palm yields were 40% lower than they are today.

Six months after pollination, the fruit of the oil palm reaches near plum-size and transitions from a deep violet to a fiery orange and red fruit.

Each fruit contains around 50% oil, and both the flesh (known as the mesocarp) and the kernel can produce oil.

The kernel, positioned at the centre of the fruit, is where palm kernel oil is derived. It is this dark yellow oil that is commonly used to produce detergents, cosmetics, plastics and chemicals. Crude palm oil, extracted from the mesocarp of the fruit, produces a deep red oil that is found in a variety of foods.

Traditionally, the trunks were stripped of the leftover bases of the fronds as they were believed to harbour parasitic plants or disease. More recently, producers have started to leave these bases to support soil formation and biodiversity in oil palm plantations. Plants can grow in suspended soils that gather in the hollows between fronds and the stem, where invertebrate communities can also find a home.

Aside from the trunk’s capacity as a host for biodiversity, the hearts of oil palm trunks are fleshy in texture and are often eaten by elephants, orangutans and wild boar that wander into young plantations seeking a meal. 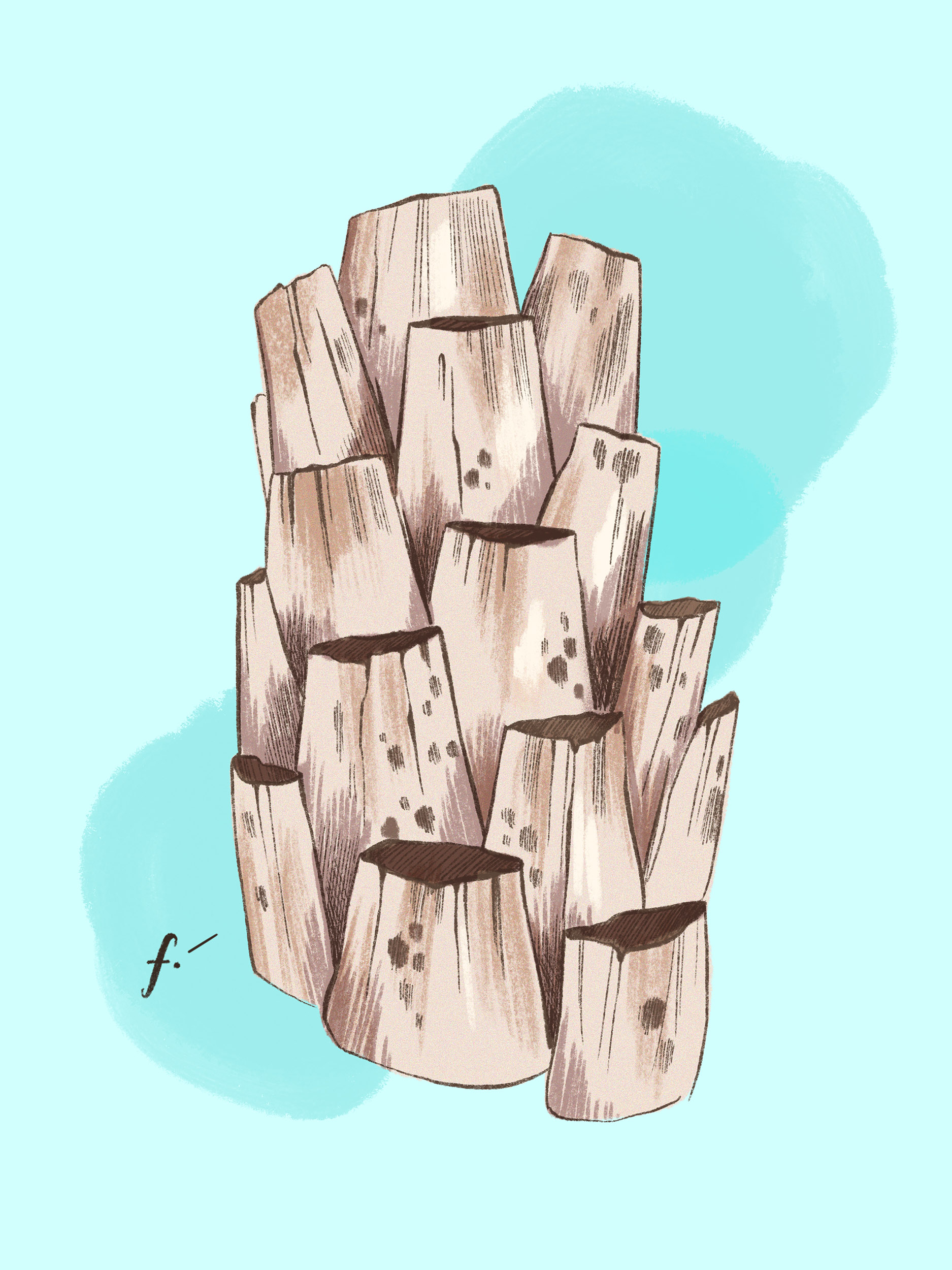 The trunk of an oil palm (Image: Leni Kauffman/China Dialogue)

Oil palm trunks are almost perfectly cylindrical, making them favourable to saw and peel. According to research however, only one third of the trunk radius – the outer layer – is strong enough to be used as a solid wood. Uses of oil palm wood have been minimal and can be costly, because its low quality requires a lot of treatment to make it suitable for furniture or construction.

With around 17 million hectares of mature palm plantations across the equator, the potential uses of oil palm wood is a key area of research and development as the industry attempts to make the production loop of palm oil as sustainable as possible.

How palm oil is certified ‘sustainable’