On 18 December 1591, a seven-month sea voyage from Africa to England ended when a ship anchored at Limehouse docks in London. Along with 150 elephant tusks and 589 sacks of pepper, the ship carried 32 barrels of palm oil. It is thought to have been the first arrival into Europe of what would become perhaps the most controversial plant product that is not a drug.

To say that palm oil is divisive is an understatement. To its advocates, it is a cornerstone of economic development, making efficient use of land and supporting millions of smallholders through profitable international trade. To its detractors, it is a cause of deforestation and social conflict, a direct threat to endangered species and a contributor to climate change.

With demand for palm oil rising rapidly, there is growing concern about its sustainability and awareness that some palm oil is “good” and some is “bad”.

What is palm oil?

The term covers various things we get from a species of tropical palm called Elaeis guineensis. “Crude palm oil” is squeezed from the palm’s fleshy red fruit. “Palm kernel oil” is extracted by crushing the fruit’s hard stone. Finally, many “palm oil derivatives” are acquired through industrial processes, which together accounts for about 60% of global palm oil use.

What is it used for?

Palm oil is in around half of all packaged products sold in supermarkets, everything from processed foods to cosmetics, soaps and detergents. It is also used as a cooking oil (predominantly in Asia and Africa), in industrial lubricants, in animal feeds and as a fuel – in 2018, half of the palm oil imported into the European Union was destined for biodiesel. 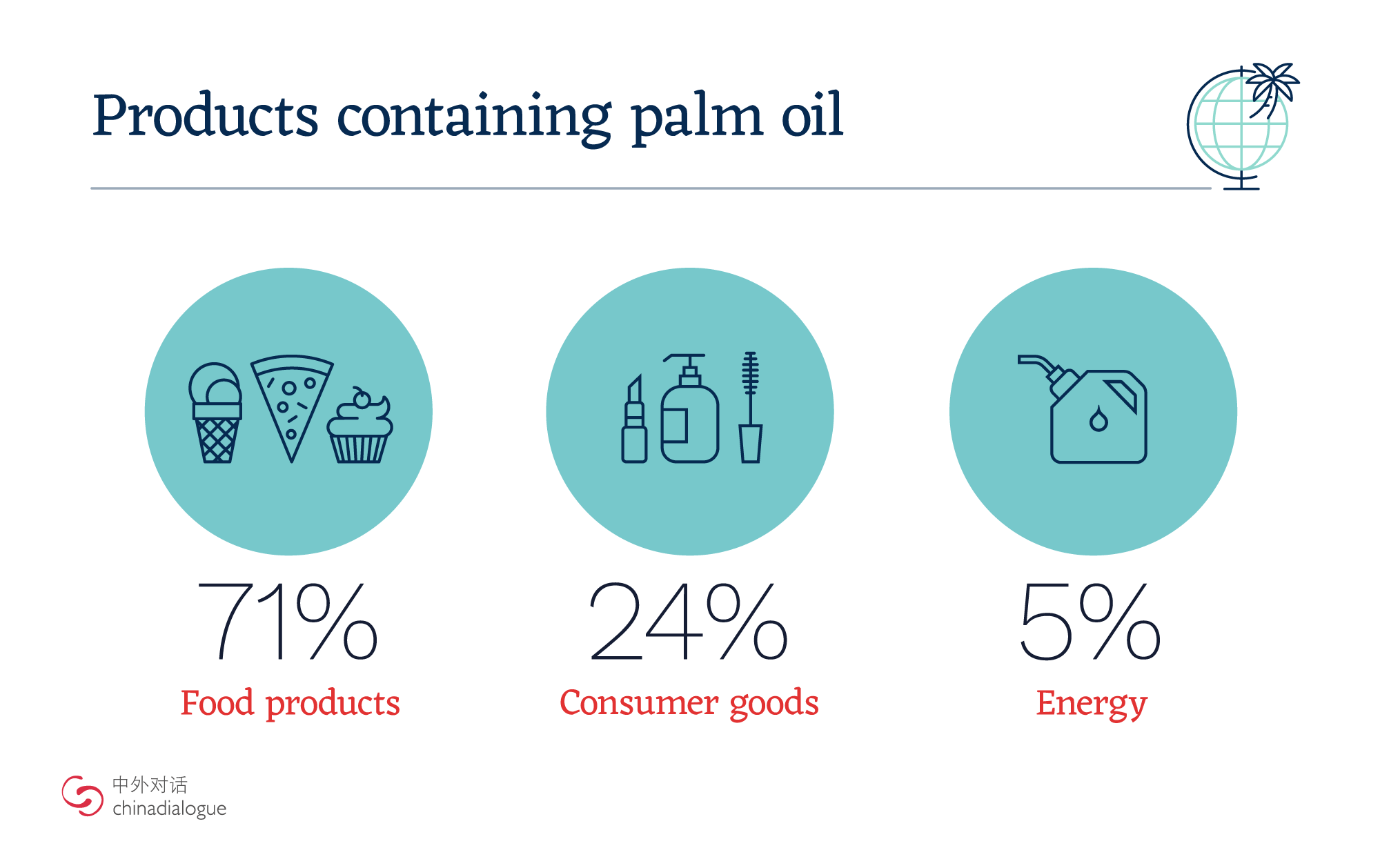 Where does palm oil come from?

The oil palm is native to West Africa, but it was in Southeast Asia that vast plantations first came to dominate landscapes. Today, about 86% of all palm oil comes from Indonesia and Malaysia. More than 40 other countries produce it, in far lower but fast-increasing quantities. The top producers in South America and Africa are Colombia and Nigeria.

Who are the biggest importers?

Why get oil from palms?

Oil palm is something of a wonder crop. It yields 4-10 times more oil per hectare than other sources of vegetable oil such as soybeans or coconut palms. This makes it an efficient and profitable use of land. The economic value of palm oil translates into jobs, infrastructure and tax revenues. In Indonesia and Malaysia, some 4.5 million people earn a living from the palm oil industry. In Indonesia alone, another 25 million people depend indirectly on palm oil production for their livelihoods. This all means palm oil could play a big role in reducing poverty ­– if done right.

So why is palm oil so controversial?

Where to start? The palm oil rush of recent decades has come at considerable cost to forests and people who depend on them. 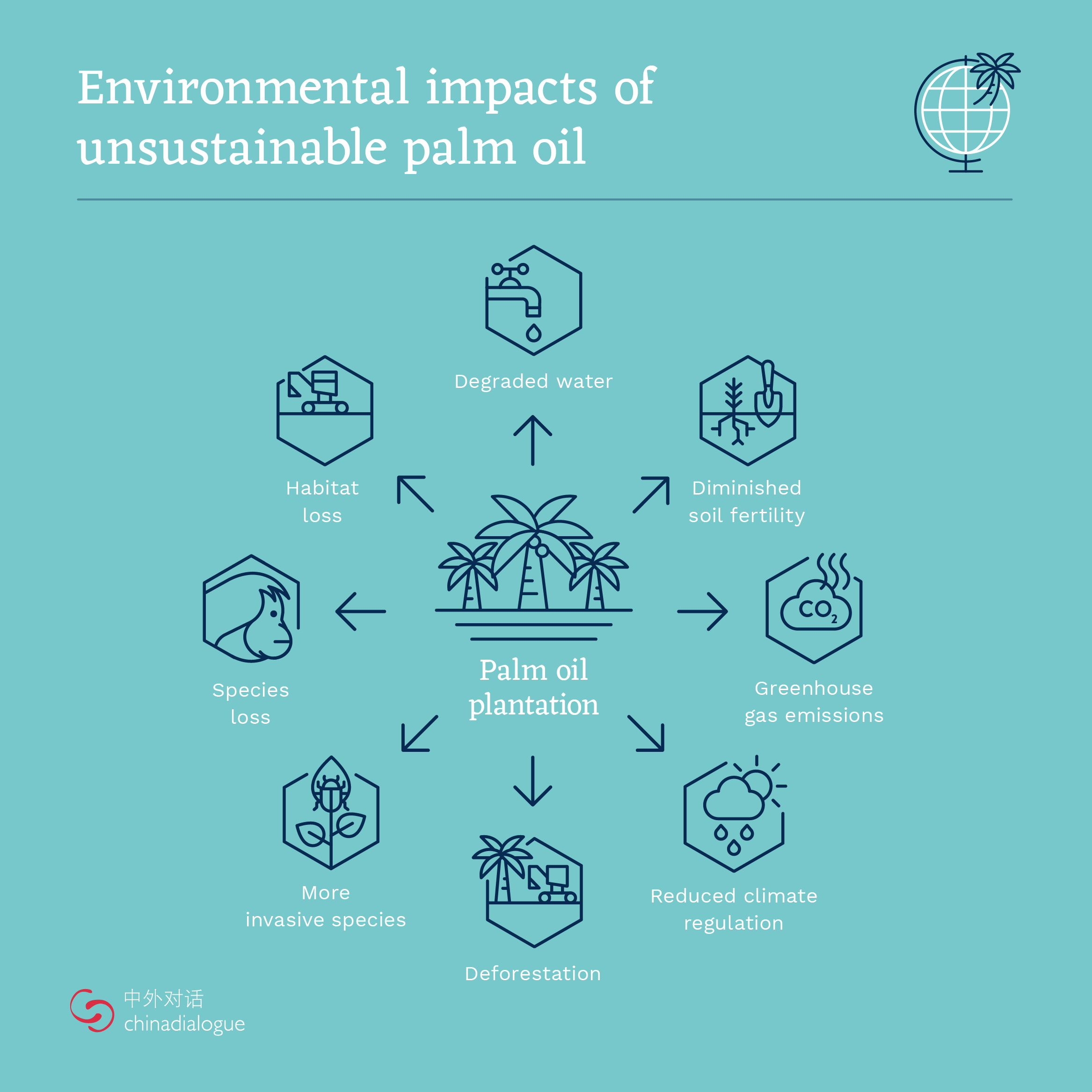 How big a problem is this?

The ubiquity of palm oil and the growing demand for it highlight the scale of the challenge. Between 2000 and 2015, the global average amount of palm oil consumed per person each year doubled to 7.7 kg. Demand for palm oil is set to triple from 2015 levels by 2050, with much of the growth coming from markets with low sustainability requirements.

No. That could have disastrous effects. It would affect the livelihoods of millions of people and would lead to even more land being used to produce alternative oils. Environmental organisations such as the International Union for Conservation of Nature say that, instead, we need to prevent further deforestation for new oil palm plantations and focus on promoting sustainable production.

But how can we tell the good from the bad?

It is not easy, for a couple of reasons. First, many products contain palm oil but their labelling does not make this clear; palm oil derivatives with names like sodium laureth sulfate or palmitic acid are listed in the ingredients. Second, it is not easy to trace the palm oil in products back to the land on which the fruit were harvested. This makes it hard to tell if palm oil comes from plantations that have deforested land or infringed local people’s rights.

Various schemes certify companies and/or supply chains as “sustainable” if they meet certain environmental and social criteria. These schemes use different standards and means of verifying performance, and some leave much to be desired. The strongest standard is that of the Roundtable on Sustainable Palm Oil (RSPO), which is also the main certifier. However, about one-fifth of globally traded palm oil is certified by the RPSO – and it isn’t always labelled as such.

Some academics and nongovernmental organisations say certification standards and audits are too weak or, worse, that they greenwash the damage companies do. Others say that in the absence of stronger national laws and regulation, certification is the best tool for making palm oil production less harmful. All eyes will therefore be on the RSPO, which adopted a considerably stronger certification standard in November 2018 and is meeting again from 3-6 November 2019 in Bangkok.