Agnes Mandishora, 35, was excited about the Chinese solar equipment she’d bought in a Harare shop. She even joked about uprooting her home’s conventional electricity cables and relying entirely on solar-powered lights. But to her dismay she soon found the lamps and batteries to be “defective and impossible to return”.

As with many Zimbabweans, Mandishora was persuaded to buy solar gear partly by the terrible drought of 2019. The majority of Zimbabwe’s energy is provided by hydropower, so drought can lead to blackouts. “Electricity would be off for over 12 hours each day,” Mandishora said. “At month-end, our power bills were US$60 for essentially staying in dark.” 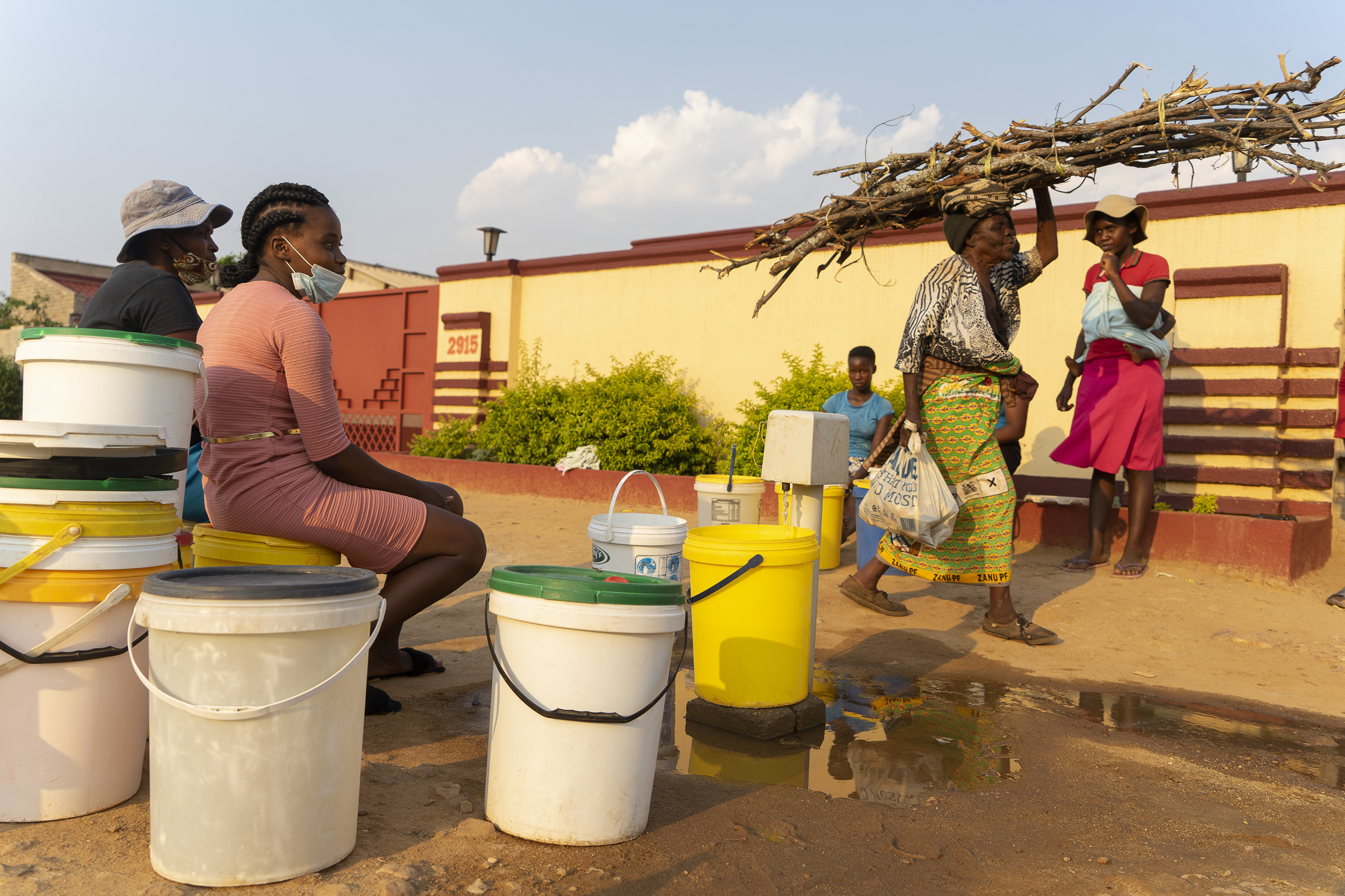 Ongoing droughts have caused shortages of both water and electricity in Zimbabwe. Lack of access to electricity in the southern town of Gwanda means many rely on firewood for cooking. (Image: KB Mpofu / China Dialogue)

Households relied on candlelight and factories worked at night when the electricity was switched back on for a few hours. Water levels feeding Zimbabwe’s largest hydropower plant on Lake Kariba were so low that the country could generate just 50% of its peak demand. Ageing coal power plants kept breaking down, adding to the misery. But solar equipment sellers saw opportunity. They launched sales drives on WhatsApp, street shows and radio slots, promising a magical 23 hours of daily power derived from solar photovoltaic panels that could charge batteries in just four hours.

Zimbabwe’s power shortages are not only the product of drought. They follow years of inadequate investment in the electricity grid, further aggravated by debts to South African power supplier Eskom, and a growing urban population.

In September 2019, the central government approved 39 solar power projects with a total generating capacity of 1,151 MW. Then, in May 2020, Zimbabwe’s state power corporation invited bids for an additional 500 MW. The government also tried to encourage independent power producers to feed their solar power into the national grid. 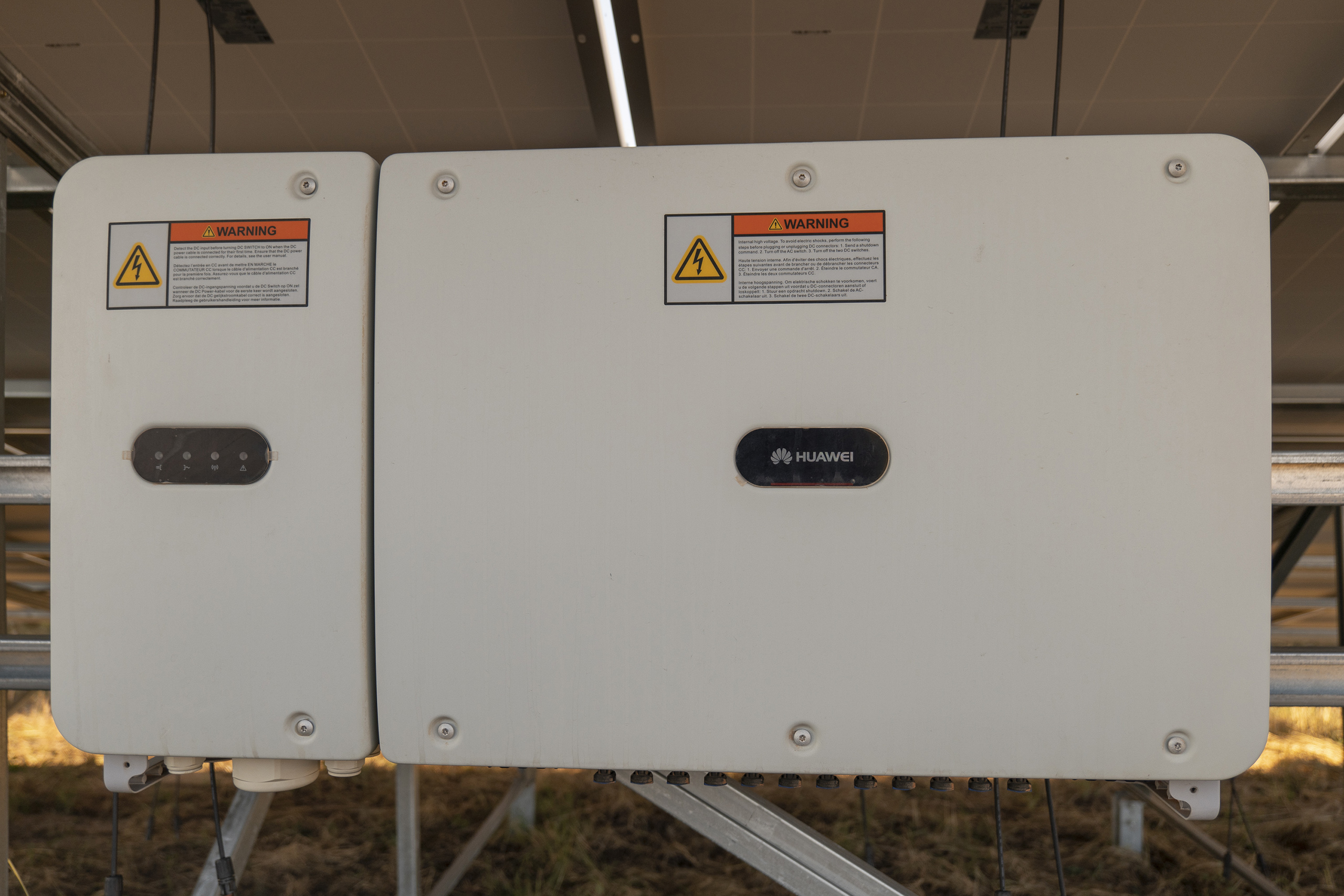 But the country continues to suffer from chronic power undersupply. Figures for 2020 and 2021 are not yet available, but in 2019, the average annual electricity supply was about 1,400MW to meet a peak demand of 1,700MW, according to the Ministry of Energy and Power Development.

Access to electricity in rural areas is as low as 21%, with 63.5% of all households in Zimbabwe dependent on wood for cooking.

Given the amount of sunshine Zimbabwe receives, it should be able to provide its people with the electricity they need.

Zimbabwe is a sunshine-rich country, enjoying a remarkable 7.5 hours of sunlight a day. Solar radiation varies from an average of about 16 MJ/m2/day in winter to about 22 MJ/m2/day in midsummer. Out of a total area of 390,750 km2, the country has 250,000 km2 that is suitable for concentrating solar power plants.

Government policy is already shifting towards solar energy with a ban, announced in November 2019, on electric water heaters in new domestic and commercial buildings, and the mandatory use of solar water heaters. This is likely to stimulate a huge market for “solar geysers”, as they are known locally. 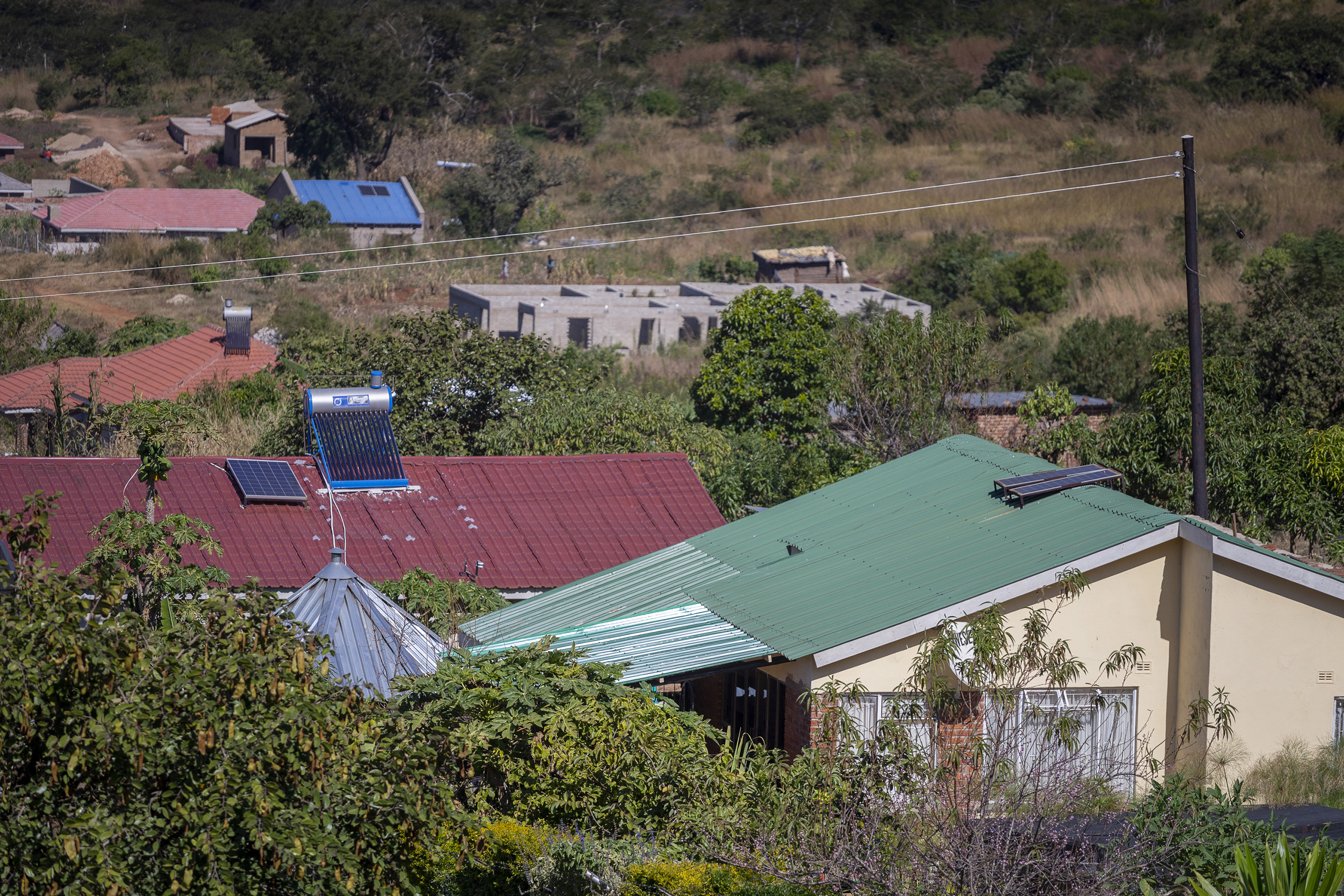 Ordinary people have also been seeking alternatives themselves, in the face of long waits to receive electricity in rural and newer townships. By the end of 2019, more than 100,000 homes across the country had solar power systems installed, according to the country’s energy ministry. Many more homes were powered by solar but not recorded as such.

Solar equipment made in China, including batteries, photovoltaic panels, cables and inverters, have become popular in Zimbabwe due to their relatively low price. Such equipment, entering either lawfully or via smugglers, makes up the majority of Zimbabwe’s energy equipment retail market, according to Tawanda Chitiyo, the founder of renewable energy start-up Tawanda Energy. However, the equipment is often substandard and promoted by false claims. And much of it ends up in unregulated urban dumps. 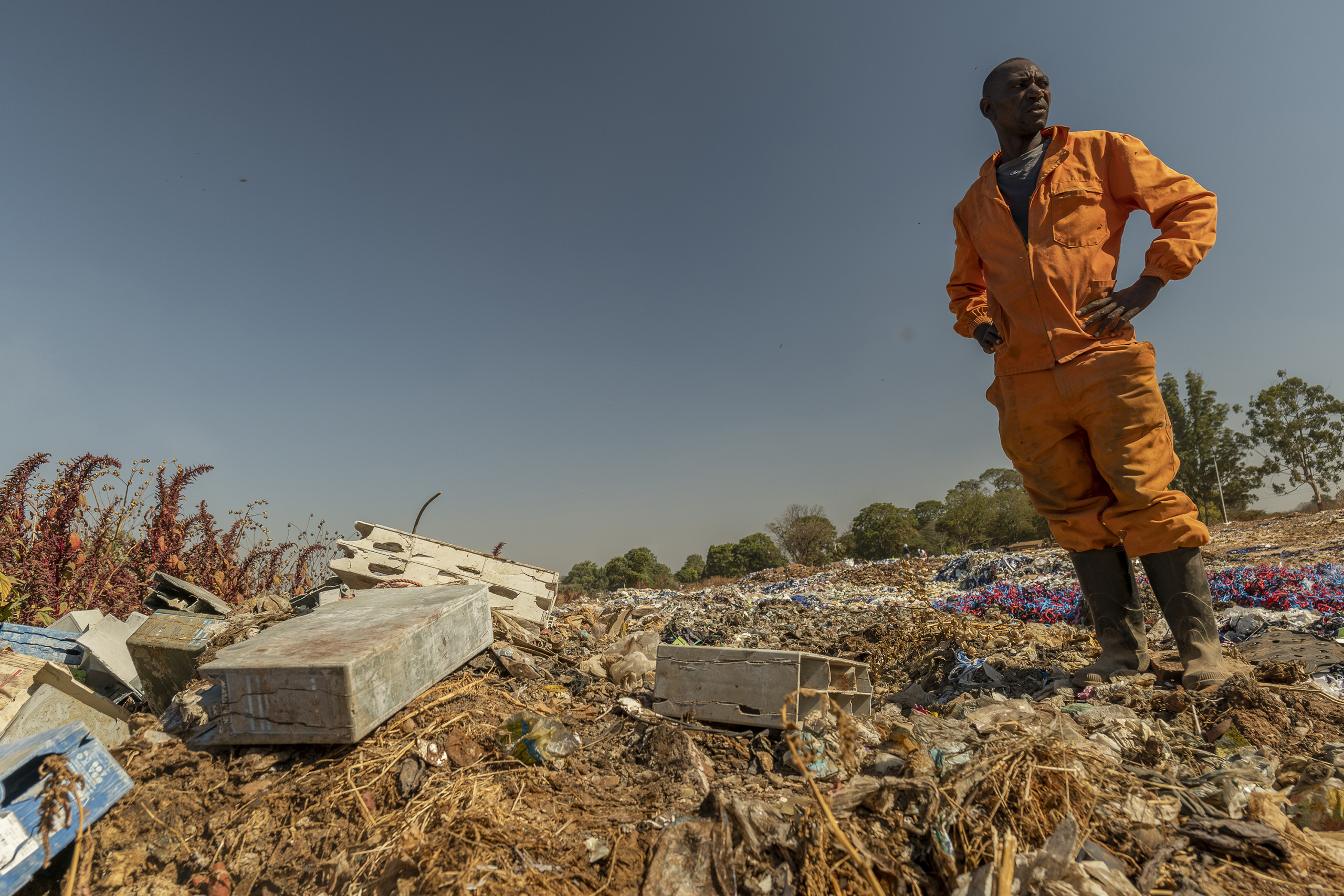 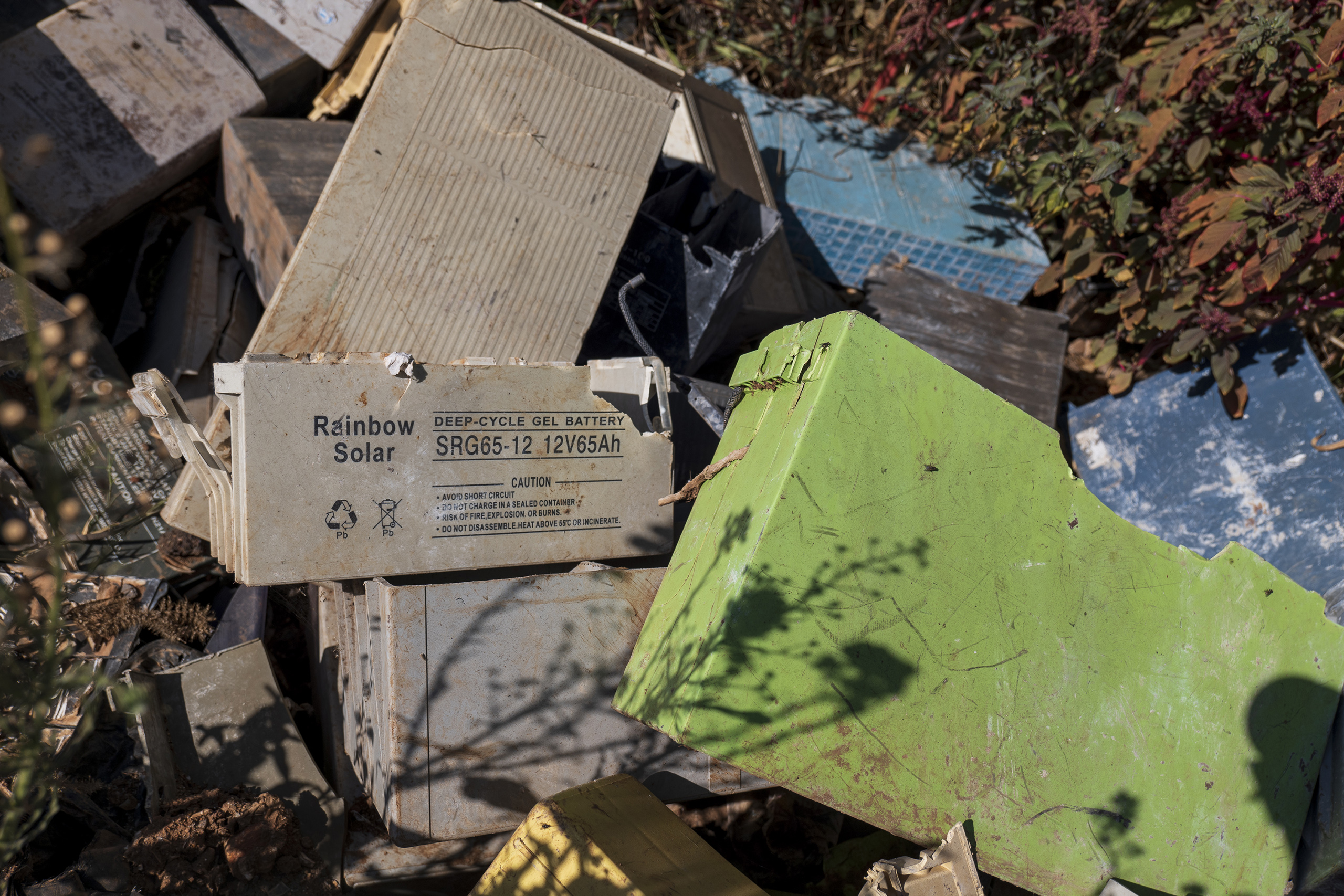 Zimbabwe receives so many faulty foreign gadgets because most consumers can’t afford the new stuff, said Gift Mawache, a geographer in the city of Mutare. Wages in Zimbabwe vary widely. The economy is largely informal, so there is no agreed average figure. But, as a guide, in 2020 the government set the minimum wage for the private sector at US$85 a month.

Skanyi Jongwe, a disgruntled buyer, said: “I forked [out] US$180 for LED solar lamps, cables and a battery. The lamps’ light was faint, barely shined beyond four hours, or became too hot to the risk of exploding. The warranty said 10 years. The reality – just five months.”

“All manufactured electrical solar implements from any country degrade over time. But the rate of failure of Chinese solar panels [in Zimbabwe] is now a great concern,” said Tawanda Energy’s Chitiyo. Nigeria, India and Indonesia are also sources of low-quality solar equipment entering Zimbabwe, but much of the equipment is originally manufactured in China.

Redress for disappointed buyers is difficult, explained Chitiyo. “Defects are not immediately apparent to most of the customers. Also, the warranty they offer is very difficult to honour. How can a foreign company in Guangzhou get a return solar shipment from Harare, Zimbabwe?”

Tawanda Chitiyo checks the reading on a solar power meter inside a house in Penhalonga. In most of the new homes being built in the village, homeowners are opting for solar energy to power their devices and heat their water. (Image: KB Mpofu / China Dialogue)

It is not only Chinese merchants living in Zimbabwe who stand accused of selling defective solar gadgets. Lots of native Zimbabwe merchants also hawk poor products. As Chitiyo said: “[In Mutare city] most of the solar cells are sold in shops owned by Zimbabwean traders and not by the Chinese.”

Smuggling in the mix

“Prestigious stuff like [North American] Rolls batteries exist in a few trendy shops in Zimbabwe, retailing for something like US$1,300… You can buy batteries in China for half [of] what they sell the same battery for in South Africa. At the end of it all, some merchants sometimes smuggle to Zimbabwe to make more,” Juru said.

Smuggling substandard equipment ultimately contributes to Zimbabwe’s waste problem. According to Chitiyo: “Defective solar lanterns and panels are not being properly disposed of in these communities. Most solar panels will end up as toys for the kids to play with.”

“Solar panels are sealed off with glass, most likely the glass will break or get damaged, exposing children and the environment to harmful substances,” he added. Toxic chemicals released from panels may include copper indium selenide, lead and polyvinyl fluoride.

Chitiyo points to Gimboki, a sprawling, informal settlement on the southern outskirts of Mutare.

“Very few if any of the solar lanterns in this community are still functional. How will they be disposed of? It’s anyone’s guess where the panels will end up… I think we already have an environmental and health problem that will grow in the future,” he said.

Zimbabwe is trying to get a grip on solar power generation. In November 2019, the state agency Zimbabwe Energy Regulating Authority (ZERA) announced plans to establish the country’s first solar testing laboratory as a way of checking the solar panels, inverters, batteries or LED lamps coming into the domestic market. ZERA also said it would maintain an online list of genuine solar traders as a guide for consumers.

The solar testing lab has so far not started operating, due to funding problems, a public servant in the energy ministry told China Dialogue on condition of anonymity.

In June last year, Zimbabwe abolished the unpopular custom duty tax on imports of solar gear, leaving in place only the 15% domestic sales tax. Chitiyo said the tax change was likely to do away with smuggling: “There is now no justifiable need for traders to smuggle equipment into Zimbabwe because it is cheap to import solar energy gadgets into the country.”

Importers of solar equipment are very happy about the removal of import taxes. Kuda Moyo, an entrepreneur importing from China, said: “An 8V solar battery and cabling required US$60 upfront. When we used to add tax, the selling price ballooned to $298. We [had to] hurt our Zimbabwe customers who are supportive but don’t earn so much.”

Some Chinese sellers are doing things by the book. “Our PV panels, batteries and cables get verified before they ship from China. We insist on manufacturers producing certain quality certificates for us to be able to buy their products and bring them to South Africa and Zimbabwe,” said Selma Gaba, manager for Jinbei Electric, a Chinese solar dealer with shops in downtown Johannesburg and in Zimbabwe. “Substandard gear harms consumers’ trust.”

A salesman explains the differences between solar panels at a shop in Mutare (Image: KB Mpofu / China Dialogue)

Zimbabwe’s own solar manufacturing industry is still nascent. Tawanda Energy is taking steps, collaborating with Infinity PV, a Danish corporation, towards producing cheaper “organic photovoltaics” (OPV) locally. OPV systems use carbon-based materials rather than silicon to absorb different wavelengths of light. They are easier to manufacture than PV systems but have the drawback of a shorter lifespan. Chitiyo plans to send his team to Denmark to be trained to produce these solar cells in Zimbabwe.

This may be a suitable model for other developing countries with more sunshine than money or specialist knowledge.