It is an idea that may have found its moment. Droughts are crippling power supplies from many hydroelectric dams across Africa, with dwindling reservoirs evaporating in the hot sun. So, say researchers, why not tap that sun? Solar panels floating on the water could generate more power to deliver to the existing turbine power lines, while at the same time shading the water to reduce evaporation losses.

The Africa plan is the most dramatic example of an explosion of interest in installing floating solar panels on reservoirs and other water bodies, such as tidal flats and flooded former open-pit mines.

In January, researchers at the European Commission’s Joint Research Centre in Ispra, Italy, published a study of the huge potential for hybrid hydro-solar power plants in Africa, the sunniest continent. Lead researcher Rocio Gonzalez Sanchez reckons covering just 1% of the continent’s reservoirs could double their power generating capacity to 58 gigawatts, increasing the continent’s overall generating capacity by up to a quarter.

Some of the continent’s biggest reservoirs could benefit, including the High Aswan on the Nile in Egypt – which currently loses about a quarter of its annual water input to evaporation in the Sahara sun – the Kariba and Cahora Bassa dams on the Zambezi in southern Africa, and the Akosombo in Ghana. It would be a cheaper alternative to building new dams, Sanchez says, with none of the environmental and social downsides from flooding more land.

Whether floating or hanging, solar panels seem set to take off in ways never previously imagined

Africa is desperately short of power to connect off-grid homes and electrify fast-growing economies. Hydroelectricity, long a mainstay of power generation in many countries, is foundering in the face of long-lasting droughts. But Africa has the most abundant solar resources in the world – typically twice the potential in Europe, says Sanchez. After studying water surface data for the continent’s 146 largest reservoirs, she says floating solar panels are a major opportunity to maximise electricity generation from the available water.

Moreover, the shading of the water surface from the sun would reduce evaporation. She estimates almost a cubic kilometre of water a year could be saved across the continent, enough to allow the hydroelectric turbines to increase their output by up to 170 gigawatt-hours a year.

Many of the continent’s hydroelectric dams have reservoirs that flood large areas of flat land. This makes them both big land-grabbers and highly susceptible to water losses from evaporation. This drawback could become an asset if the large surface areas were utilised for floating solar panels.

Kenya already has plans for three reservoirs on the Tana and Turkwel rivers. Other hydroelectric reservoirs with large surface areas that Sanchez lists as suitable for conversion include those behind the Kainji dam in Nigeria, the Merowe and Roseires dams in Sudan, the Buyo in Cote d’Ivoire, the Lagdo in Cameroon, and the Mtera in Tanzania.

The deployment of floating solar panels is growing in popularity around the world. Some experts expect it soon to become a “third pillar” of solar power, after rooftop and ground deployment. More than 35 countries today have an estimated 350 floating systems, though most to date are small, says Frank Haugwitz of the German cleantech consultancy Apricum. Their total capacity late last year was just 2.6 GW.

Japan pioneered the idea at a research scale over a decade ago. Since then, China has led the way. The world’s largest currently operating array of floating solar panels is on flooded former coal mines in Anhui, eastern China, with a capacity of 150 megawatts. But interest is growing elsewhere in Asia.

The largest project currently under way is in South Korea, on waters covering former tidal flats behind a barrage at Saemangeum. Here the plan is to spend $4 billion on a 2.1-GW installation to be operational by 2025. The Indian state of Kerala has floating panels on its Banasura Sagar reservoir. Maharashtra state has talked of a 600-MW project on the Koyna reservoir, one of the country’s largest hydroelectric schemes.

Singapore is reportedly exploring the idea of installing floating panels offshore to power data centres. While technologists are considering installations between offshore wind turbines, taking advantage of the grid connections. Other Asian countries with plans include Taiwan, Thailand and Vietnam.

Europeans are becoming interested too. The German renewable energy company BayWa last year completed a 27-MW project on a flooded sand pit in the Netherlands. A study for the company from the Fraunhofer Institute for Solar Energy Systems last year proposed getting to gigawatt scale in Germany by utilising some of the 500 flooded open-pit lignite mines that scar some 470 square kilometres of the countryside in the east of the country. It put the theoretical potential at 56 GW. Even 5% cover would deliver 2.74 GW of capacity, equivalent to two large fossil-fuel power stations.

At face value, it costs more to float solar panels on water than to plant them on firm ground: about 10-20% more typically. But there are advantages. Floating panels don’t take up land, suffer less from dust pollution, and do not require land levelling or removal of trees and buildings. They also often have a higher energy yield because the water is cooler than the land.

At hydroelectric reservoirs there are added benefits. Grid connections are already present to distribute the power. And the two sources of power may complement each other, with solar energy available during the day allowing engineers to save water for generating hydro-power after the sun goes down.

But the biggest add-on gain, particularly in the tropics, is that by covering the open water, the panels reduce evaporation, and so increase the hydroelectricity generating potential of the reservoir. In much of the tropics, reservoirs lose up to two metres of water from their surfaces each year, which can represent up to a third of the water they capture.

The reservoir behind the Kariba dam in southern Africa loses a quarter of its inflow this way. The Akosombo dam in Ghana loses more than half. Nobody has yet found a practical way to reduce these huge losses. Power-generating solar panels may be the answer. 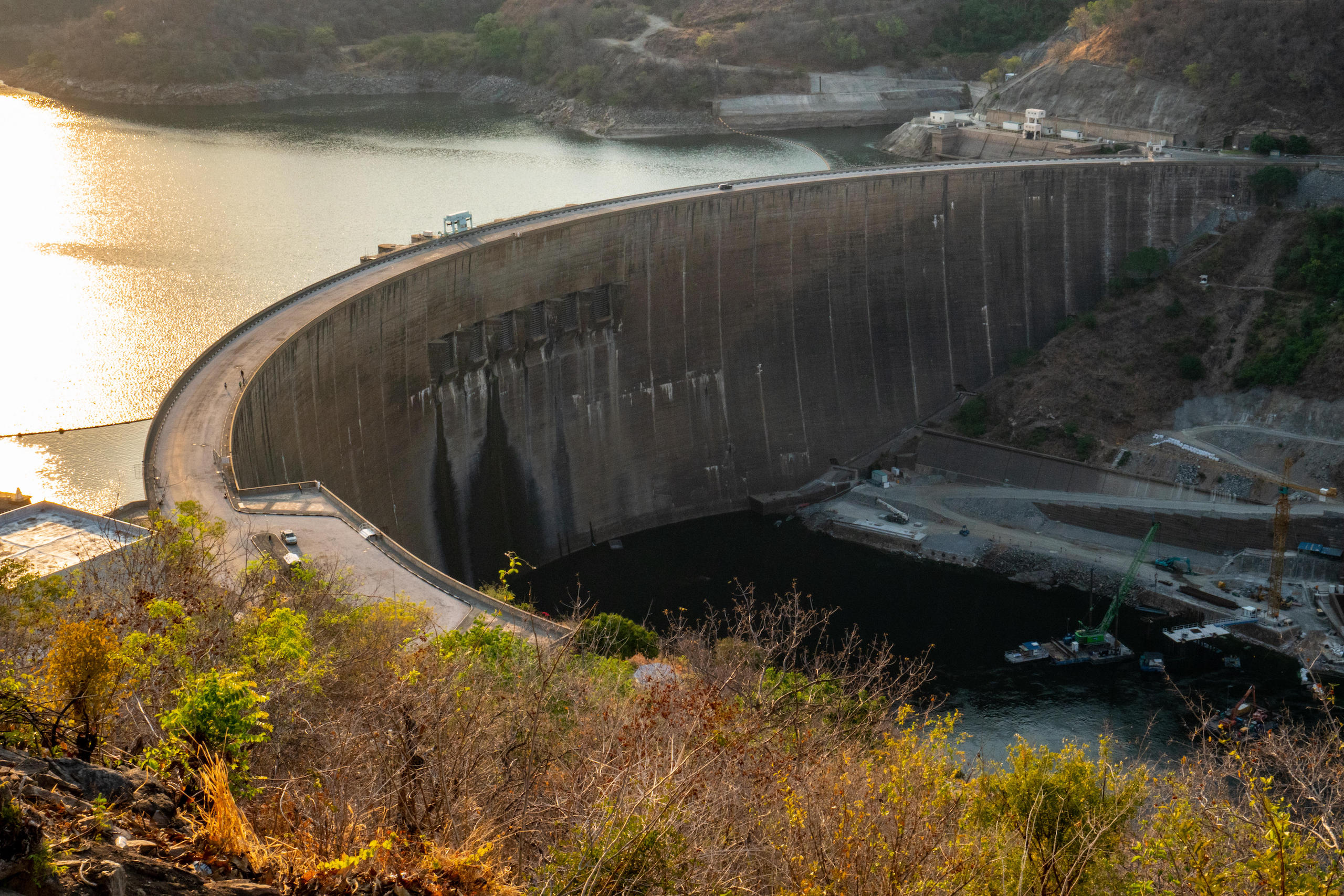 Zimbabwe has suffered serious power shortages in recent dry seasons as the reservoir behind the Kariba dam has been laid low by drought and evaporation (Image: Eyal Bartov / Alamy)

So far there have been no environmental impact studies or other detailed analyses of the potential impacts of floating solar panels for wildlife or the wider environment. Sanchez suggests potential damage to fisheries from reduced sunlight in the water column or changing water temperatures. These changes could also reduce the growth of algae, which sometimes might be beneficial for freshwater ecosystems where algal blooms are a problem. In Africa, some floating panels might be at risk from attack by crocodiles or hippos. Equally, the infrastructure could reduce access of these animals and others to the water.

With land a growing constraint on tapping solar energy, a report by the World Bank three years ago said floating solar panels open “new horizons to scale up solar power globally, particularly in countries with land constraints”. According to Haugwitz, the bank is currently considering funding hybrid hydro-solar power plants in Pakistan, Turkey, Ukraine, Mali and the Ivory Coast.

The land constraint on solar-power deployment is encouraging other ideas. In the US, California could convert its network of more than 6,000 kilometres of irrigation canals, the world’s largest water conveyance system, into “solar canals”, says Brandi McKuin of the University of California Santa Barbara. The power would probably be used to replace the diesel generators that drive many of the pumps that push water round the canal network.

The panels would not float, which is made impractical by the rapid water flows down the canals. They would instead be installed on gantries or strung from suspension cables above the canals. The benefits of shade would largely remain, however. Like floating panels on reservoirs, the suspended panels would reduce evaporation from the canals and potentially also reduce weed infestation, McKuin argued in a study published in March in the journal Nature Sustainability.

What is clear is that, whether floating or hanging, solar panels seem set to take off in ways never previously imagined.

As China’s energy mix shifts to renewables, how can power markets evolve?