G20 countries still financing overseas coal - China Dialogue
Skip to content
As the threat of climate change looms, the world must transition to cleaner energy as quickly as possible and avoid burning most fossil fuel reserves. Coal is of particular concern. It accounts for 40% of global carbon emissions from fossil fuel use, which is more than any other individual source.

Despite last year’s Paris Agreement, G20 countries – the world’s largest economies – continue to invest in projects that increase the world’s dependence on coal. Governments have a limited pool of public funds that they can use to finance investments in other countries, including energy projects. While expanding energy access is a worthy endeavour, these investments often take the form of coal-fired power plants, coal mining, and other coal-related projects, such as railways and ports designed primarily to transport coal. These dirty investments damage the air, water, public health, and environment of developing nations under the guise of bringing energy. The costs and life spans of coal projects can stretch for decades, trapping developing nations into a system of incredibly carbon-intensive and polluting energy use.

The governments of the G20 nations account for the vast majority of international coal finance, much of which flows from export credit agencies (ECAs) such as policy banks and multilateral development banks. Businesses in the financing country – rather than in the recipient countries, where the coal projects are built – are often the main beneficiaries of these investments. The emerging economies, on the other hand, are left to grapple with the financial, public health, and environmental impacts.

Carbon Trap: How International Coal Finance Undermines the Paris Agreement, that reviews international coal financing by G20 countries from 2007 to August 2016. The report and accompanying database provide a window into the scale and nature of the coal projects being financed.

Analysis by the NRDC shows that:

1. Between 2007 and 2015, G20 nations financed US$76 billion (520 billion yuan) worth of international coal projects. China, Japan, Germany, and South Korea accounted for four-fifths of this financing. 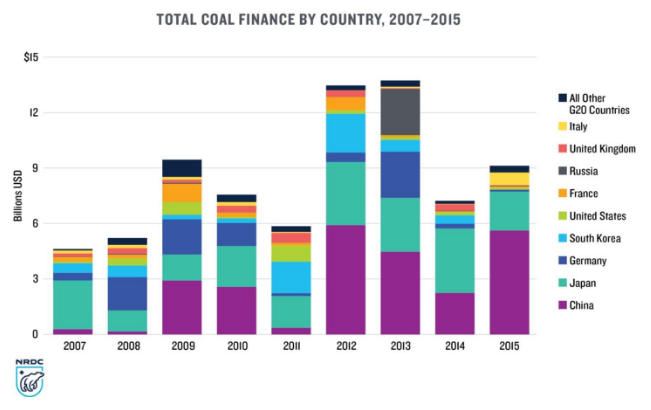 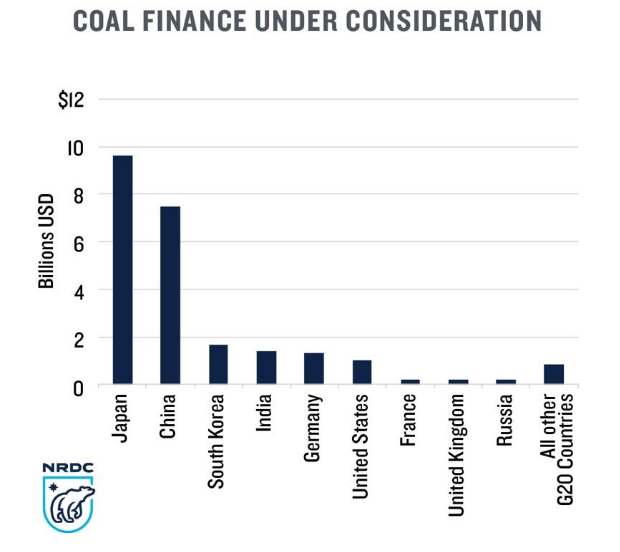 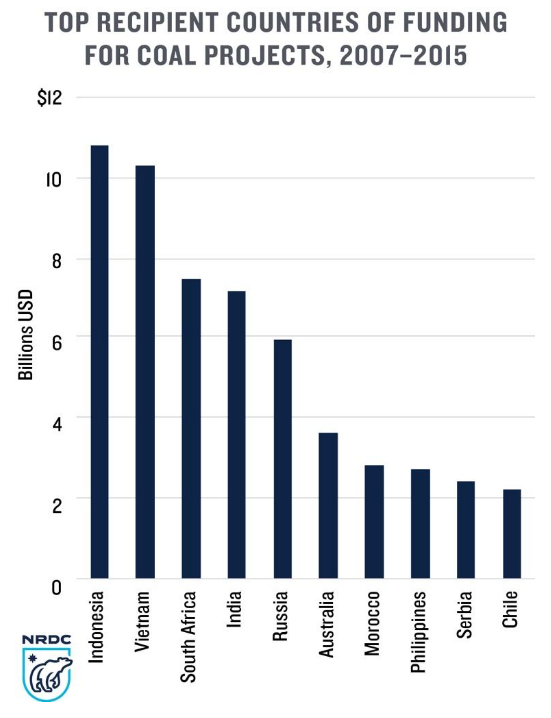 4. Low-income countries received less than 2% of G20 international coal financing. Instead, most of the money goes to middle- and high-income countries, contrary to frequent claims that public finance for coal is intended to help the poorest countries expand access to energy.

China is the world’s second largest economy, the largest coal consumer and has the most coal-fired power plant capacity. China has also become the largest financer of coal mining and coal power projects overseas during the past nine years, as it increased its financing for investment opportunities abroad.

Given the overcapacity of coal power within China, financing these projects also provides overseas business opportunities for Chinese coal-plant equipment manufacturers and engineering and construction companies.

Domestically, China has realised that its overdependence on coal is causing severe air pollution, and climate and other environmental impacts. It has set a coal consumption cap in key air pollution regions, which requires decreases in coal consumption. The National Energy Administration has issued policies to stop the construction of new coal-fired power plants to avoid a worsening coal power bubble, which threatens to leave many of the plants as stranded assets. The government is establishing a carbon cap and trade programme next year and continuing investment in renewable energy and low-carbon energy generation such as wind, solar PV, hydro and nuclear.

China’s Banking Regulatory Commission has established the Green Credit Guidelines for Chinese banks, including their investments abroad, which requires them to consider climate change in their financing decisions. And the government is promoting the development of green finance, including green credit and green bonds, in order to expand investment in clean projects and reduce investment in carbon intensive, polluting projects.

Several multilateral banks and the export credit agencies for countries in the Organisation for Economic Cooperation and Development (OECD) have pledged to restrict coal financing. The China-backed Asian Infrastructure Investment Bank and BRICS New Development Bank have both expressed their interest in prioritising financing of low-carbon projects to address climate change, and China has committed 20 billion yuan (US$2.9 billion) to its South-South Climate Cooperation Fund.

Given China’s goal of transitioning away from coal to cleaner energy sources domestically, and its efforts to become a leader in climate change internationally, now is the time when it should reconsider whether continuing to be a leader in financing coal projects abroad is a good idea both environmentally and economically.

In light of China’s massive progress in renewable energy deployment, China can use this opportunity to shift more of its overseas financing toward clean energy sources such as renewables rather than coal. Since coal investments are increasingly seen as stranded assets, continued to finance coal puts China at risk of financial exposure, as the costs associated with coal power will be higher than the returns in the long run and assets may be rendered unusable before the end of their lifetime.

G20 countries should understand that financing coal infrastructure that will be around for decades is a carbon trap – locking recipient countries into many years of harmful air pollution, water impacts and greenhouse gas emissions. Financing coal impedes the global transition to a low-carbon economy. Given the grave climate and health impacts linked to coal use, it is time to end public financing for coal projects.

To bring G20 countries’ overseas project finance in line with global climate change goals, and to improve transparency, we offer the following recommendations:

Roundtable: What outcomes will signal success at Marrakech