I sat alongside the Ou River listening to the waves lap against the half-submerged Lat Tha Hae temple in Luang Prabang province, northern Laos. Grandpa Un paused from sweeping his riverside yard and spoke to me in a strong voice. “I was born here,” the ethnic Lue elder said. “My parents came from the old Lat Tha Hae village, deep in the forest. After the [Vietnam] war, we were resettled to this place along the river. Our temple is over 70 years old. I remember being ordained as a novice here when I was 13 years old. I’m very hurt to see it flooded.”

The Nam Ou 1 hydropower dam was inaugurated in November 2019. It flooded the section of the Ou River – known locally as the Nam Ou – that flows past the ethnic Lue and Khmu villages of Lat Tha Hae, Pak Jaek and Huay Lo, about 40km upstream from the city of Luang Prabang. With a total capacity of 180 megawatts, Nam Ou 1 is the last in a seven-dam cascade being built on the Ou by China’s Sinohydro Corporation. The project is a joint venture with the Lao state electricity corporation, Électricité du Laos (EDL), which holds a 15% stake in the project. All electricity generated by the Nam Ou dams will be sold to EDL. 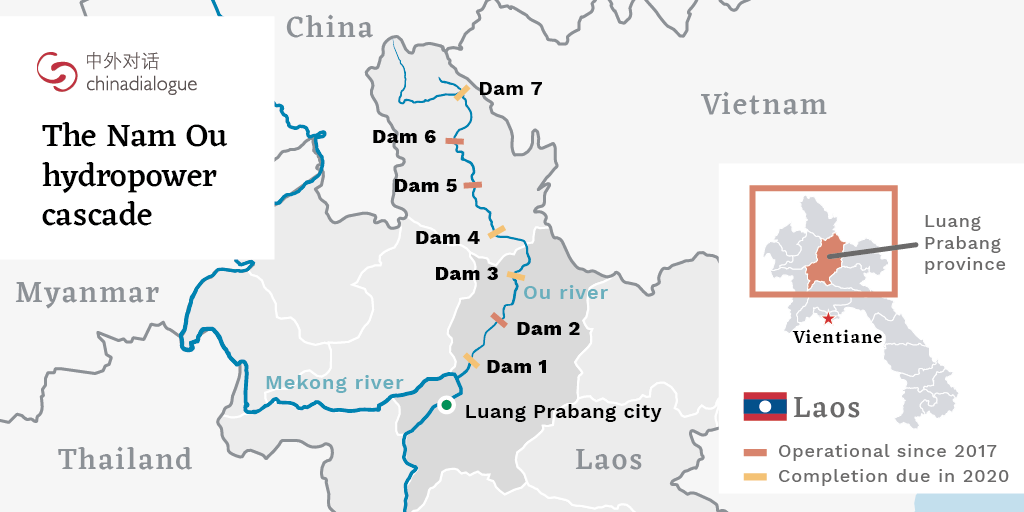 As a key part of China’s Belt and Road Initiative in Laos, the Lao government has granted the Chinese enterprise planning and development rights over the entire Ou River basin. The dams will permanently alter the ecosystem of the country’s longest Mekong tributary, but limited information is publicly available, and few Lao citizens know the details of the project. 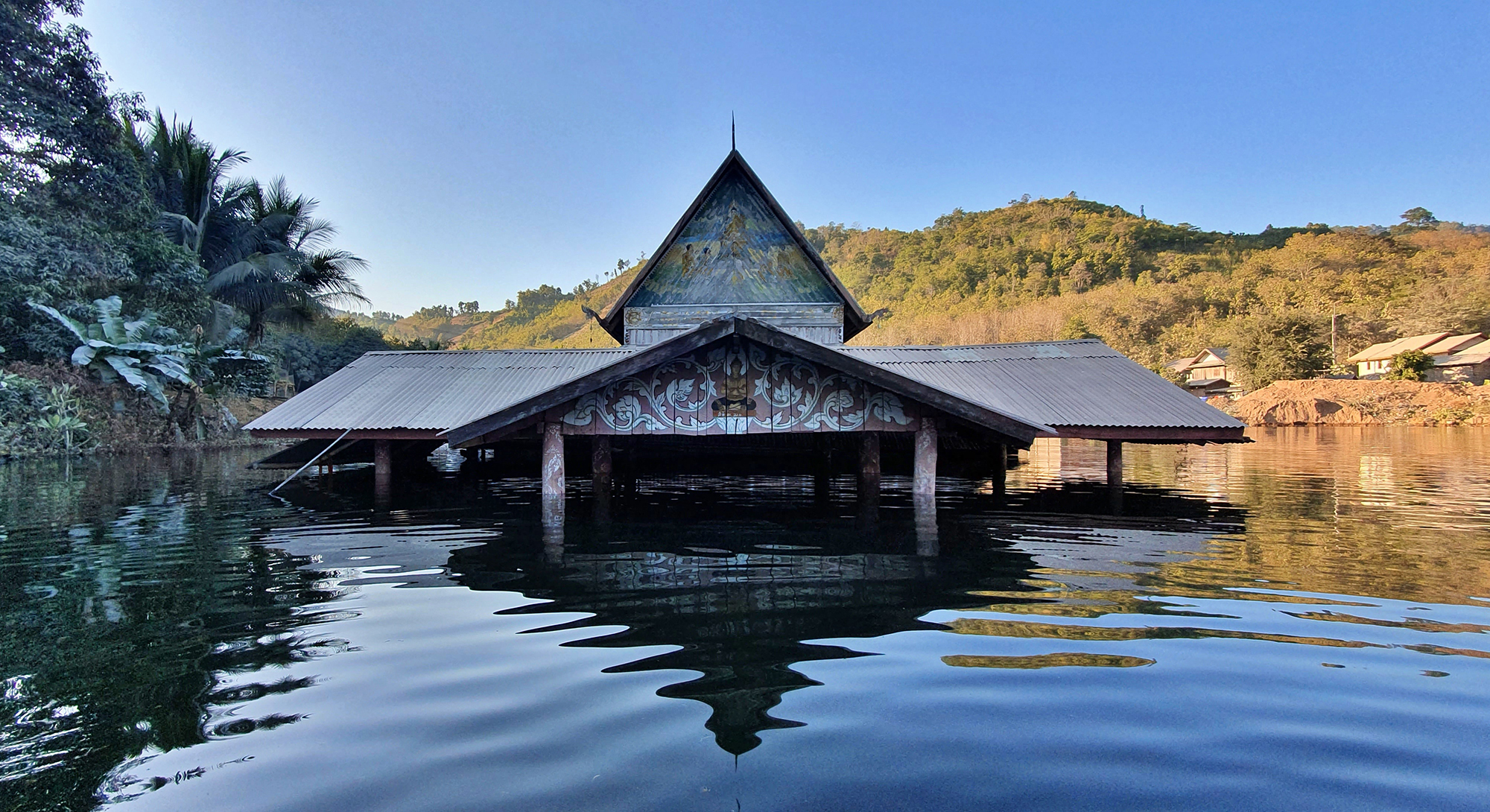 Over 70 years old, this temple was the heart of the Lat Tha Hae community (Image: Ton Ka/China Dialogue)

“On the first day the dam gates closed, we could still see the temple doors. By the next day, only the roof remained. For Lao Buddhists, failing to protect our temple is a failure to protect our religion. Who can respect us now?” asked Grandpa Un. “The Buddha image that was housed here was the spirit of our community. Now it has been moved to a new place. This will affect our destiny, so that no matter how we try, our fate will never improve. We will only fall, just as our temple has flooded. We Lao people have abandoned our religion, and the Buddha will abandon us in return.”

Continuing my walk on National Road 13 along the river, I came across an elderly Lue woman sitting on the bank, staring out at two wooden fishing boats bobbing in the water. “May I take a photo of you with these boats,” I asked, smiling. Despite being a stranger to this area, I fully expected the woman to answer: “Yes.”

“No. I don’t want my photo taken,” replied 50-year-old Muansy. Uncharacteristically for a Laotian, she looked angry and sad, and stared into the distance beyond the boats. I sat quietly beside her and followed her gaze to where the newly-built Nam Ou 1 dam blocked the river. 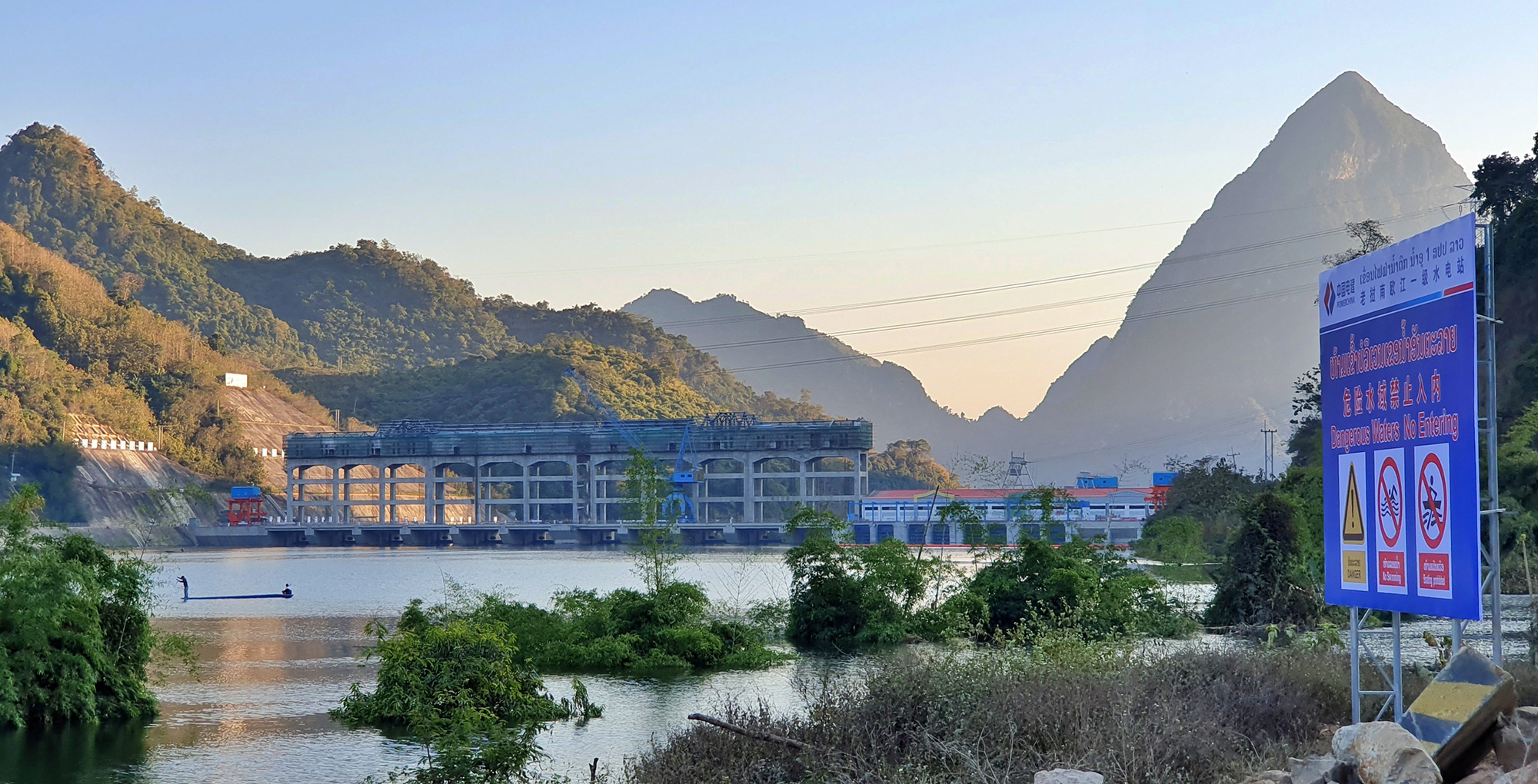 “When they closed the dam gates on 21 November, many families brought fishing nets here with high hopes, but only a few caught anything. Today, we can only find small fish,” said Muansy quietly. “When the fish disappeared, the local ferry was abandoned and we began to experience the opposite of the prosperity we had been promised.”

I continued my walk to the newly relocated Pak Jaek village, where I met 46-year-old Omjan. She wore her hair in a bun and her mouth was red from chewing betel nut. Her eyes looked angry. “Pak Jaek temple has been abandoned, along with our old village on the other side of the river. The temple is in a bad state now, with no one to sweep and maintain it. The Buddha image has not been removed, and we still paddle across the river to pray whenever we miss it. The new temple that’s being built by the company is not like the old one. We don’t feel the sacredness of our religion in it.” She appeared on the verge of tears. “Development has made us abandon our religion. Our temple was a safe place for us, a place where our hearts were at rest. There’s no longer a place like that for us.”

I walked down to the water to ask about renting a boat. “Out of respect, we only use paddle boats to cross the river to the temple. No motorboats are allowed,” an elderly Lue woman named Grandma Phan told me. “This has been our custom since the old days.” She introduced me to Thongsi, who agreed to take me across. 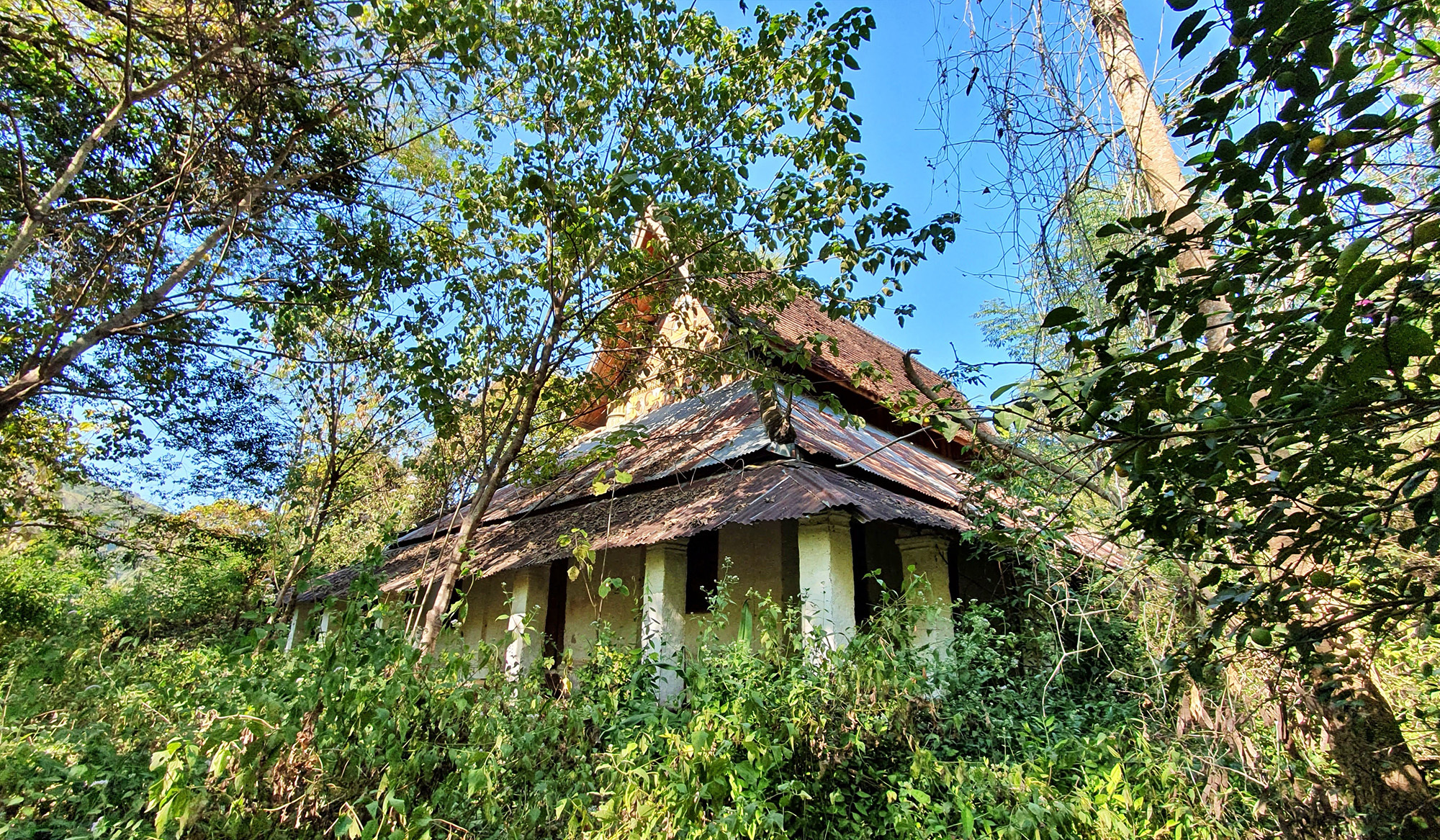 This temple stands abandoned after the people of Pak Jaek village were relocated to the opposite side of the river (Image: Ton Ka/China Dialogue)

The ground surrounding Pak Jaek temple was littered with limes and pomelos. Swarms of insects buzzed around the rotten fruit, attracted by the sweet smell. I walked through the dried leaves of ancient teak trees up to the temple’s tall wooden doors, half-eaten by termites. Carvings of deities decorated them, and the names of villagers who had donated money for the temple’s construction were written in ancient Lue script. Beyond the old doors, a golden Buddha image sat on the altar. 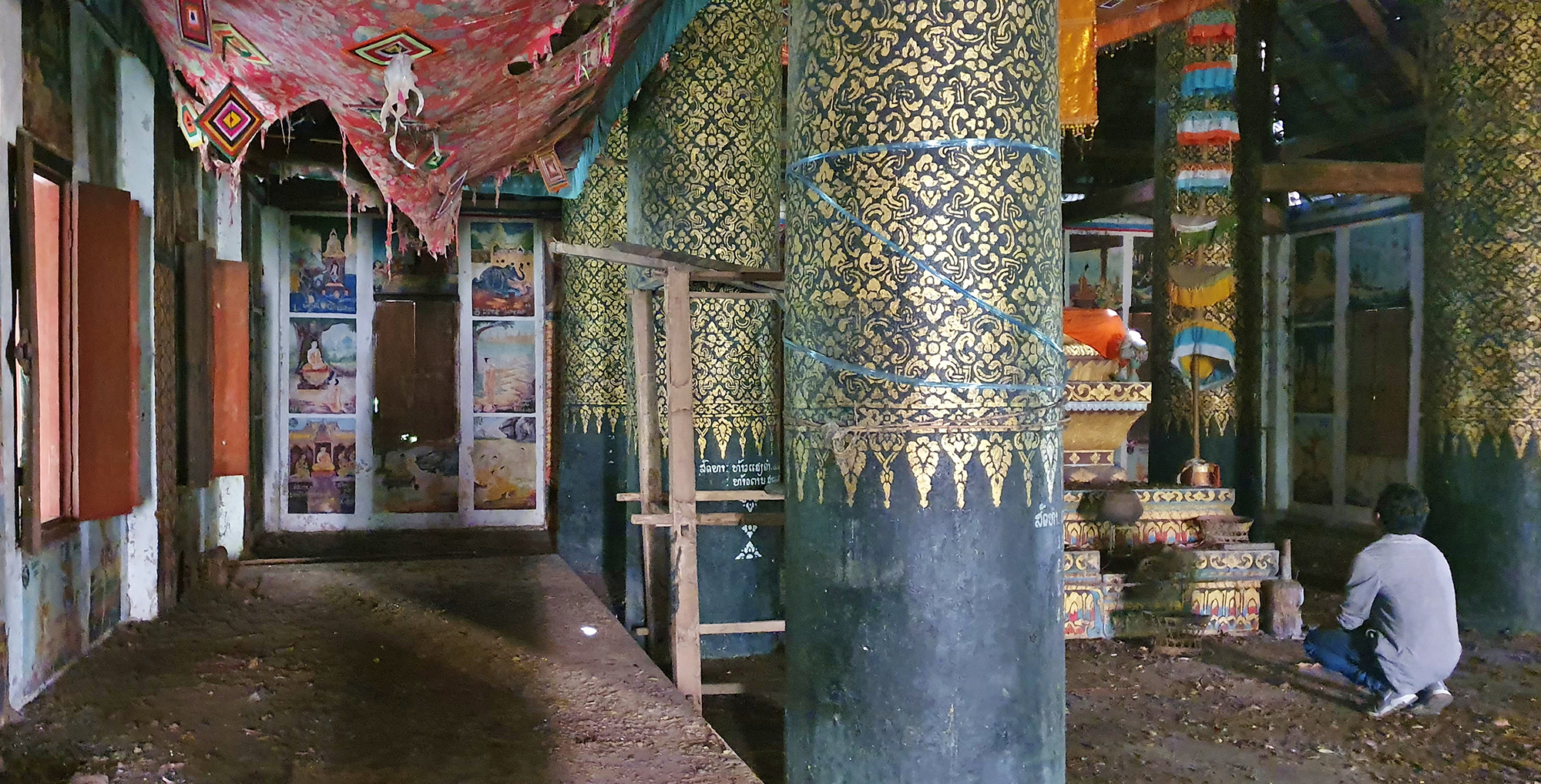 The Buddha statue inside the Pak Jaek temple has not been removed, and local people still cross the river to visit (Image: Ton Ka/China Dialogue)

Back on the boat, Thongsi told me: “I have no words to say about this temple. As I talk, I feel pain in my heart. I don’t know how our leaders have allowed China to do this to us. A temple is a sacred place where we come to put our hearts at ease. A new temple cannot replace our old one. The depth of feeling and connection are different. I feel such regret, my tears are falling inside.”

Thongsi dropped me on the opposite bank of the river, and I continued walking towards Huay Lo village. Along the way I met 32-year-old Chansi, a thin, pale Lue woman hanging laundry out to dry in front of her riverside home. “Since the dam was built, we’ve lost our riverbank gardens. We used to plant enough vegetables for our family to eat and to share with our brothers and sisters. Now we have to buy them, and the vegetable seller only comes every few days.” Chansi spoke with a soft voice, so that I had to listen carefully to catch her words. 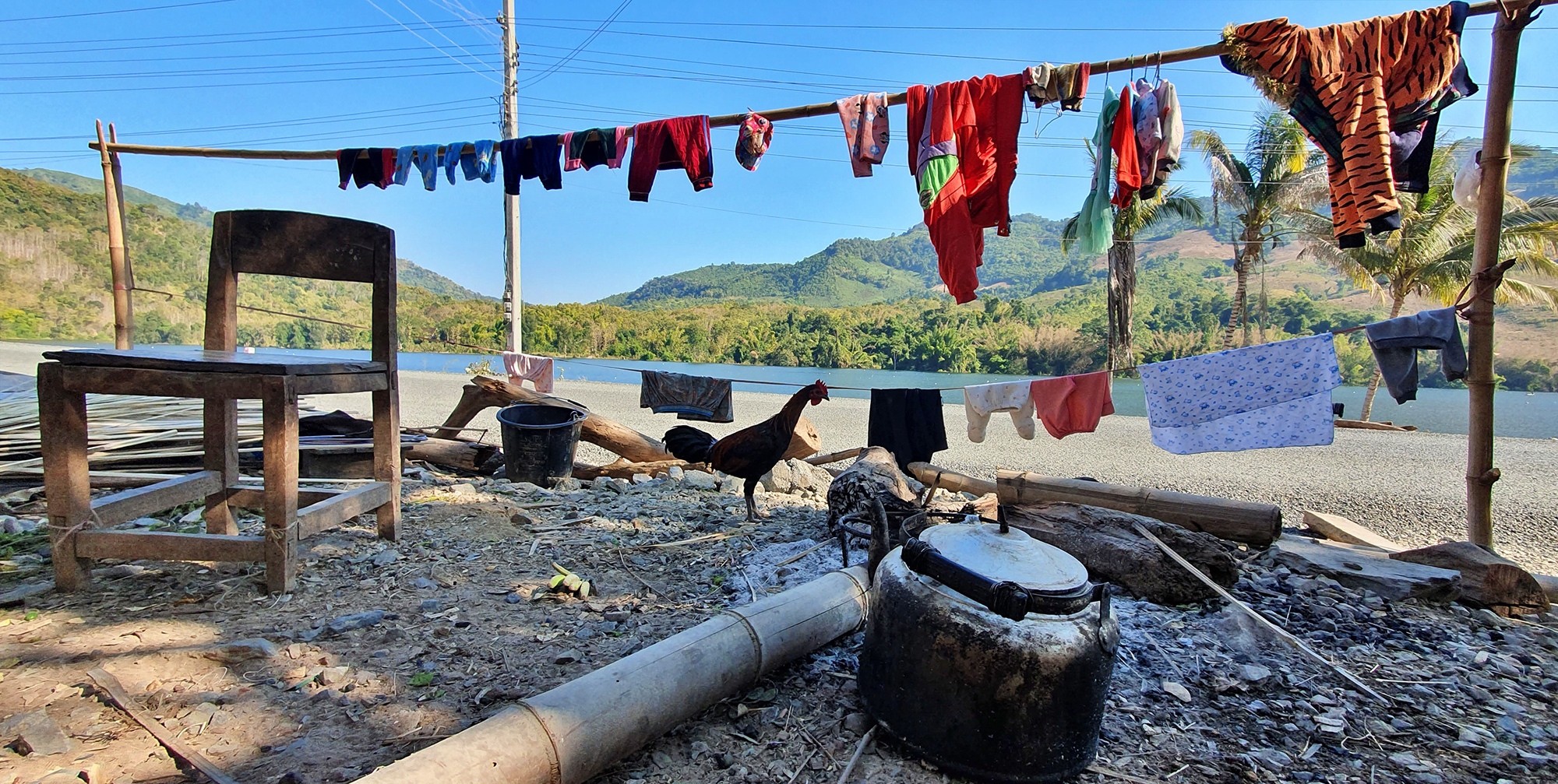 The end of my journey brought me to Huay Lo village, where I met 45-year-old Khone, a tall man who spoke with a heavy Lue accent. “The river doesn’t flow like before. Since they’ve blocked it, the level drops suddenly, then rises suddenly. The fish have died or gone elsewhere. Before, we used to pan for gold. Now the gold is gone,” he said.

His neighbours Sit and Kaisy joined the conversation. “When we heard news of the dam, I thought we’d get a better life, but it’s been the opposite. Before we didn’t need much money, but now we have to buy everything. I don’t like the new resettlement homes that were built here by the company. The quality is not good, and the wood is soft. I miss my old home. It was built solidly from good wood. Some of our neighbours took compensation money to build their own homes, but the expense was more than the money received. Whose responsibility is it to take care of this – the company’s or the government’s?”

“I don’t want China to build dams on our river. I want them to be demolished,” said Kaisy. “Let the river flow freely like before. Let the fish and our riverbank gardens return to us.” 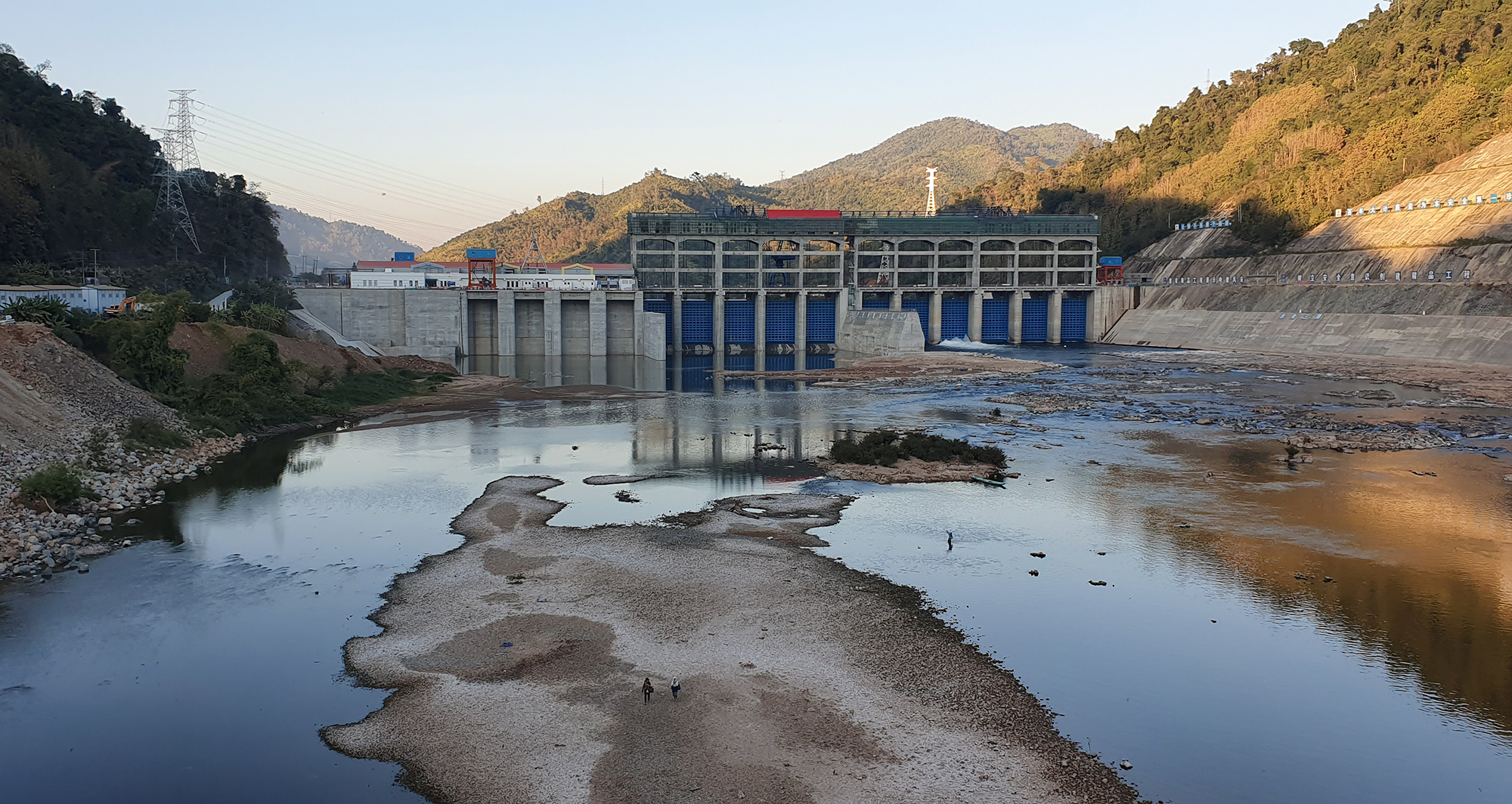 The Nam Ou 1 is the last in a seven-dam cascade being built along this tributary of the Mekong by China’s Sinohydro Corporation (Image: Ton Ka/China Dialogue)

Trouble for Belt and Road in Myanmar