The Least Developed Countries (LDC) Group represents 46 nations and around one billion people at UN climate talks. Many LDCs, despite having contributed the least to the causes of climate change, are among the worst hit by its impacts. By emphasising the need for urgent action to support the world’s most vulnerable countries, the LDC Group has a critical role to play in climate talks, at which access to finance, adaptive capacity building and technological support from developed nations remain problems. 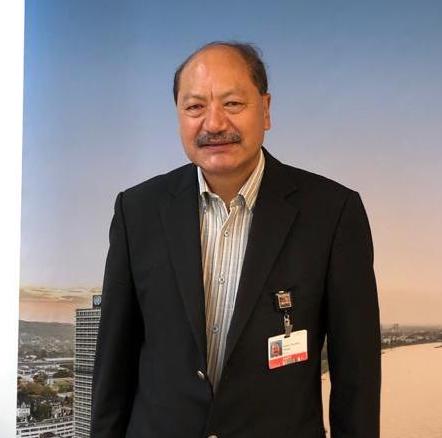 Bhutan will lead the LDC Group in negotiations at COP26 in Glasgow, the UK. Widely recognised as a “carbon negative” country that absorbs far more carbon dioxide than it emits, and which committed to remain carbon-neutral indefinitely at the 2015 Paris climate summit, Bhutan has long been a leader in driving global movement towards deep emission cuts.

What is a Nationally Determined Contribution (NDC)?

NDCs are emissions reduction pledges provided by each country that signed and ratified the Paris Agreement. Countries are supposed to update these pledges every five years.

The Third Pole spoke with Wangdi to find out what LDCs want from COP26, and how he hopes challenges around trust, finance, solidarity and access can be overcome.

What are the LDCs asking for at COP26, in terms of ambition from developed countries and large emitters, and how to get there?

Current nationally determined contributions do not put the world on track for limiting warming to 2C, let alone [the Paris Agreement target of] 1.5C. But we know this will be critical to safeguard the lives and livelihoods of our communities and future generations. At COP26, parties must submit new NDCs committing to deeper emissions reductions. These must reflect their fair share of the global effort and be consistent with 1.5C pathways, with developed countries and large emitters taking the lead.

The Paris Agreement calls on all parties to communicate new NDCs every five years as part of the global effort to mitigate climate change. COP26 needs to see a decision on a common timeframe of five years for NDCs, in line with the five-year cycles of the Paris Agreement and to ensure ambition can continue to increase.

Along with more ambitious NDCs committing to short-term actions, countries should submit long-term strategies setting out their national pathways for reducing emissions to net zero by the middle of the century, which the Intergovernmental Panel on Climate Change (IPCC) has made clear will be necessary to limit warming to 1.5C.

UN climate talks face a crisis in the wake of pandemic-induced delays and failure to deliver on promises around climate finance. Can developed countries and large emitters restore trust at COP26 in Glasgow? What would they need to offer in terms of solidarity with LDCs?

It’s well understood that the climate crisis cannot be adequately addressed without global solidarity and cooperation. Over a decade ago, [a commitment was made to deliver] US$100 billion per year [of climate finance] by 2020. The funds received are far from enough and this finance has predominantly taken the form of loans rather than grants, prioritises mitigation over adaptation, and is not reaching LDCs at the scale necessary. We believe that wealthy nations must embark on a big push to deliver this long-promised funding with a credible delivery plan. This is not just about a figure, but it is also about rebuilding trust.

As deliberations begin on the next finance goal, we must see willingness to engage, build from that floor [of $100 billion per year], and base the next goal on science to reflect the true needs of developing countries.

What are the potential outcomes of a failure by developed countries and large emitters to restore trust around solidarity with the LDC Group at COP26?

The decisions that need to be taken at COP26 will be critical in determining climate action going forward. This is a make-or-break moment. Decisions can either set us forward towards achievement of the goals of the Paris Agreement and Sustainable Development Goals, or they can create loopholes and undermine efforts so far. Outcomes in Glasgow must be ambitious and they must be fair.

Loss and damage caused by climate change is worsening and will continue to worsen if large emitters and developed countries do not act now, and provide finance and support for developing countries to address climate change.

This is a make-or-break moment. Decisions can either set us forward towards achievement of the goals of the Paris Agreement, or they can create loopholes and undermine efforts so far.

Failure to act now on climate change and deliver on climate finance commitments will inevitably lead to catastrophic impacts with huge costs in the future. There is an urgent need for solidarity and cooperation from all parties to reduce emissions, support efforts to adapt to the changing climate, and deal with all the consequences of climate change.

How might challenges posed to LDC participation by the Covid-19 pandemic and lack of access to vaccines impact COP26, and how should this be mitigated?

As we all know, measures to prevent the spread of Covid-19 have made travel more difficult, and we are concerned that the obstacles will be too difficult to overcome in the lead-up to COP26. There remains a risk that LDCs may be underrepresented at COP26.

Various measures have been implemented to ensure that LDCs attend COP26, and we are appreciative of these efforts. We fully understand the need to keep everyone at COP26 – as well as the wider community in Glasgow and beyond – safe by reducing the risk of spread of Covid-19. Our primary focus is a fully inclusive and fair COP26. Because we are the ones most affected by climate change, it is critical that the most vulnerable people’s voices are included in decisions on the global response to the crisis.

For years, developed countries have been talking about capacity building for officials in LDCs. Do LDCs still need this focus, or is finance now their greatest need?

Capacity-building efforts must be sustainable, and delivered in addition to increased finance. Capacity building should be country-driven, based on countries’ needs and priorities.

Both capacity building and climate financing are urgent and required. We have to develop and fully implement NDCs, National adaptation plans (NAPs) and other climate actions to achieve the goals we have committed to.

There has been a lot of focus on adaptation in the UNFCCC talks. For LDC Group countries there are limits on how much adaptation is possible, however. What are you asking for, in terms of loss and damage, at Glasgow and beyond?

Adaptation is crucial for both preparing for and responding to climate change impacts, particularly for vulnerable LDCs, which have contributed low carbon emissions but are most vulnerable to the current and future impacts of climate change. According to the UNEP Adaptation Gap Report 2020, while nations have advanced in planning, huge gaps remain in finance for developing countries and bringing adaptation projects to the stage where they provide real protection against climate impacts such as floods, droughts and sea-level rise. Currently, climate finance focuses more on mitigation than adaptation. We need funds for adaptation. We must achieve a balance.

But we also know that there are limits on how much adaptation is possible. Climate change impacts are already causing devastation in our countries. Our economies and our people are experiencing loss and damage because of climate change. Support is needed to address this loss and damage, to repair and recover and restore as best as possible after climate impacts hit. We didn’t cause this crisis but we are suffering the worst of its impacts. Dedicated finance to address loss and damage is urgently needed. COP26 must see progress on achieving this.

This interview was originally published on The Third Pole.

UN says the world has eight years to halve emissions

Roundtable: Should COP26 be delayed?