Two hundred and two millimetres! That’s how much rain fell in Zhengzhou in a single hour on 20 July, a record for mainland China.

Zhengzhou, capital of Henan province and a city of 10 million, lies in central China. It is not normally a wet place. Annual rainfall is around 600mm, only slightly more than fell on the city on that one day in July. Other parts of the province were also affected. According to official data, at least 302 people died and 55 went missing in the resulting floods province-wide. The media and official statements labelled it a “once in a thousand years” event, or in one case “once in five thousand years”. Experts from the National Meteorological Centre complained these were not scientific descriptions. The language reflected the shock people were feeling.

Abroad, extreme weather events usually result in more discussions about climate change. So, with China having committed to carbon neutrality, did these floods boost awareness of climate change?

Was the climate angle missing?

In the day or two after the floods, reports mainly focussed on the flooding of tunnels on Zhengzhou’s underground line 5 and Jingguang Road, where people had been trapped. Readers were also informed about the causes of such an intense cloudburst, and why the risks had not been foreseen. The media were repeating explanations provided by local and national meteorologists, focusing on the preceding weather conditions and the local terrain. No link with climate change was drawn.

International media, such as the Economist, pointed out that the climate change angle was missing from media coverage within China. But once the initial shock and concerns had eased, broader analyses appeared, which included climate change.

Some commercial media outlets adopted a climate perspective first, discussing how climate change makes extreme weather events more frequent and more intense globally. While they didn’t make a specific link with the Henan floods, they did refer to how these incidents increase discussion of climate change overseas. For example, a Yicai article described how Nature magazine connected climate change and extreme precipitation events after 2018’s Hurricane Florence. While Beijing News quoted a foreign meteorologist who blamed the summer’s floods in western Europe on climate change. Most of the experts featured in those articles came from international research institutions, intergovernmental organisations or NGOs. Little was heard from Chinese researchers or government officials. 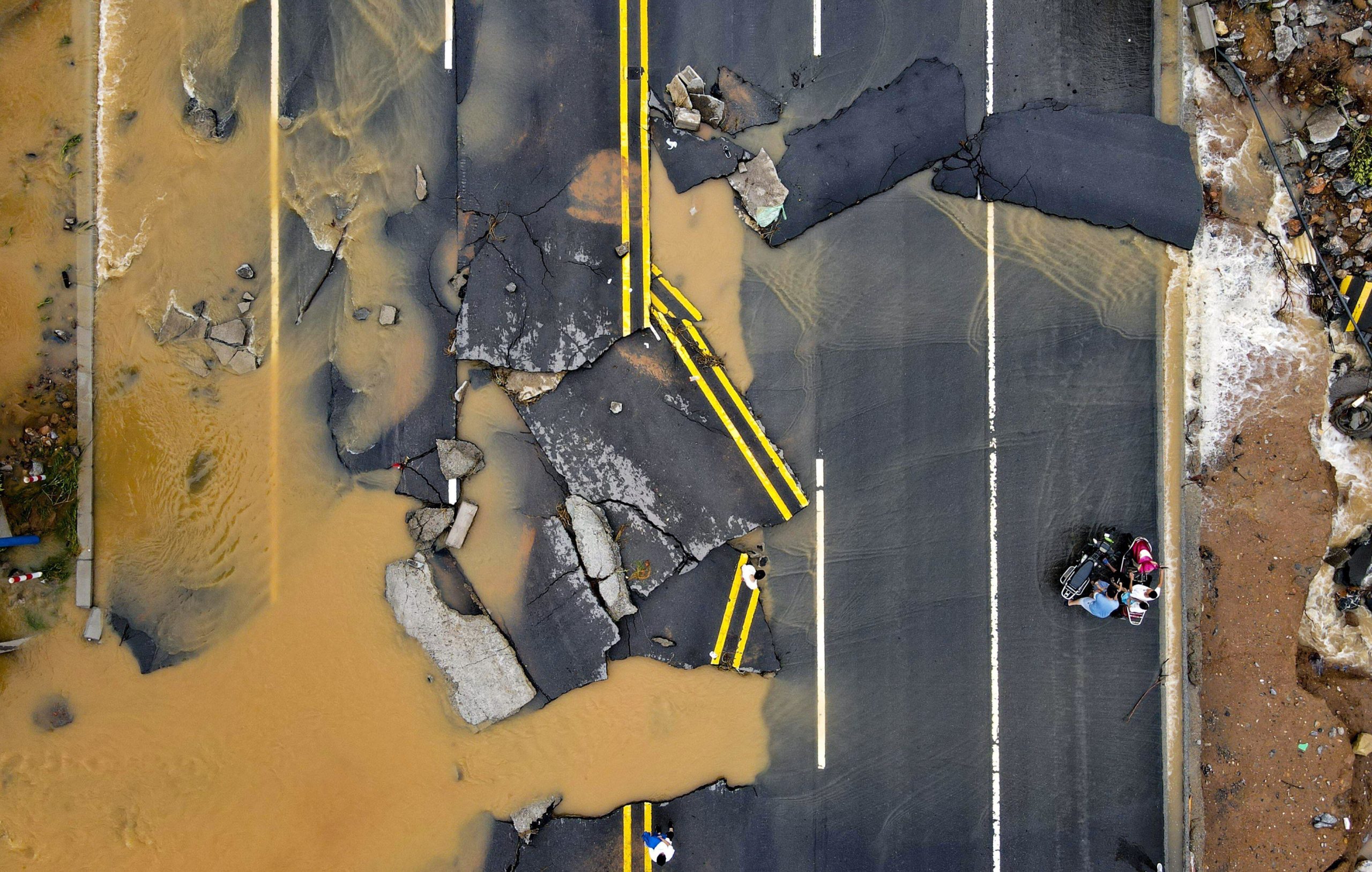 Official media outlets, managed directly by the Party and government, were a little slower. However, the close links those outlets have with official research institutions meant that reports from the China News Service and the Guangming Daily featured comments from the National Climate Centre and members of the Chinese Academy of Engineering.

So, although the climate angle did receive coverage, the flooding did not heat up the climate debate. Data from Baidu shows that searches and instances in news coverage of the term “cloudburst” rocketed after the Zhengzhou flooding and remained high for a week. But there was little change in searches for the term “climate change” – two small peaks, but remaining low.

The concept of carbon neutrality is now well-known in China, but is often understood as a development strategy, a trend in investment and technology, rather than what it actually is: an emissions reduction target. The point of reducing emissions is to reduce the climate risks arising from global warming, a major one being more frequent and intense extreme weather.

While it is not hard to find reports that, to varying degrees, draw the link between extreme weather events and climate change, the connection between carbon neutrality and climate change is missing. This creates a problem: carbon neutrality is generally regarded as a new “national policy”, originating with central government and being propagated from the top down – to state-owned enterprises and local governments, then onwards to private firms. But while the public are aware of the policy, they are not aware of the reasons behind it, and government efforts to raise awareness of climate risks are limited.

So, shortly after the Henan floods, and with the public not yet understanding climate risks, a bizarre theory went viral: that while climate change might be bad news for Europe and the US, it would be good for China, as historically Chinese dynasties flourish in warm and wet conditions.

Authoritative publications such as the National Climate Change Assessment and the Climate Change Green Book, have emphasised that the damage done by climate change outweighs any benefits. The spread of misleading information shows that when scientific knowledge is not effectively communicated, rumours and pseudoscience fill the gap.

Achieving carbon neutrality will be a tough fight, requiring the participation of all parts of society. If we are to shift to low-carbon working and living, we need to communicate about climate risks, and why it is necessary to cut carbon emissions to reduce those risks.

Better understanding of climate risks will also help with adaptation and preparation. Climate change means more frequent and intense extreme weather events, striking at unexpected times in unexpected places. The shocking scenes in Henan were not a one-off. That same month, cloudbursts and glacier melt caused flooding in the Taklamakan Desert, the driest place in China, inundating a Sinopec exploration site. Experts have said that climate change makes it necessary to “raise awareness of disasters and change the existing understanding”.

How to improve climate communications?

Increasing understanding of climate risks is a long-term undertaking. The coverage of the Henan floods points to some near-term actions we could take.

In China, wider awareness of climate risks will require the participation of state media. Not long ago, those outlets provided widespread coverage of carbon neutrality, popularising the concept across society as a whole. But the reporting on the floods shows no signs of an effort to link the intense rainfall with climate risks, or to link carbon neutrality with the reduction of those risks. That was a missed opportunity.

“Official” scientists – those working for public bodies, such as government departments, universities and research institutions – are usually the voices most trusted by the Chinese public. But in coverage of the floods, they were less visible than scientists from overseas, international bodies, or NGOs. Widening understanding of climate science needs those official scientists to be more active communicators.

Some communication techniques could also help. After the floods, Chinese scientists did mention that climate change could exacerbate extreme weather, but always stressed that there wasn’t enough evidence to link climate change with this particular incident. Scientists should remain professionally cautious, but how to talk about the uncertainties of climate science?

Climate change communication experts warn that while uncertainty is the impetus that drives climate research forward, for the public it is a barrier to action. For ordinary people, the repeated emphasis of the uncertainties reduces the persuasiveness of scientific information, in turn reducing the inclination of government and the public to act.

In its handbook on climate communication, the IPCC (Intergovernmental Panel on Climate Change) suggests that when explaining links between climate change and extreme weather, scientists should emphasise established findings and consensus, and avoid overly technical language. The IPCC’s recently published Sixth Assessment Report shows that, since the 1950s, rainfall has become more frequent and more intense in the vast majority of regions, and that climate change, caused by human activity, is likely to be the main cause. That is a scientific consensus worthy of emphasis.

International experience shows that using the attention generated by extreme weather events as an opportunity to talk about the underlying science can raise public understanding of climate change and its associated risks, and in turn boost emissions reductions and adaptation. This is not about taking advantage of a disaster. It is about ensuring that when the next “unthinkable” disaster occurs, our losses will not be so grave.

The author wishes to thank Wu Yunong and Jiang Mengnan for data collection and analysis.

What can China learn from the Texas blackout?

The US and China face a common enemy: climate catastrophe

How can China’s climate journalists better engage the public?