The skies cleared over Pakistan towards the end of last week, revealing the extent of the flood damage caused by what UN chief António Guterres has called a “monsoon on steroids”. This year’s disaster has surpassed the devastation of floods in 2010 and is “unprecedented”, Sherry Rehman, Pakistan’s minister for climate change, stated on 1 September at an event in Islamabad to prepare for the next UN climate summit.

Rehman said the “monster monsoon” floods have washed away 45% of the country’s cropland, mainly in the southern province of Sindh – half of which is still inundated with floodwater. Pakistan has so far suffered damage of about US$10 billion, with 33 million people affected, she added.

Experts fear the latest floods will hit Pakistan’s rice production this year. This will have global consequences, as Pakistan is the world’s fourth-largest exporter of the grain.

The extent to which the disaster is an impact of climate change is not yet known; attribution studies to determine this are currently being carried out with the results expected later this month. But it is already evident, experts say, that climate change was a factor.

Rehman said that Pakistan would press hard for rich, high-polluting nations to pay up at the annual UN climate summit in Egypt this November. Pakistan currently chairs the G-77 group of developing countries plus China and plans to push for a loss and damage finance facility to be established and become operational.

Many news reports have compared this year’s disastrous floods to those of 2010. But climate experts say while there are commonalities between the two events, there are some crucial differences authorities should be aware of.

Fahad Saeed, a climate scientist at global think tank Climate Analytics, said that the 2010 disaster was caused by riverine floods triggered by very heavy rainfall in the mountains of northern Pakistan in July. Saeed said that the floods travelling down the Indus River from the north to the Arabian Sea provided a considerable lag time in which regions downstream could take evacuation measures.

This year’s floods, meanwhile, have occurred mainly because of torrential monsoon rains in Sindh and Balochistan, in the south of Pakistan. The deluge, almost four times the long-term average, began in mid-June and continued through August. It was compounded by flash flooding in some northern districts, again due to heavy rainfall and cloudbursts. “Both Sindh and Balochistan, areas which get scant monsoon rainfall, were soaked this year and then there were riverine floods in the Indus and Kabul rivers as well,” explained Saeed.

I don’t have any evidence that glacial melt played a major role. These were rain-triggered floods.

In May, the Pakistan Meteorological Department had forecast higher-than-average rainfall in the country, warning of flash floods. But because of the current political turmoil in the country, “this information fell on deaf ears, including the country’s media”, Saeed said.

He added that, like in 2010, the El Niño Southern Oscillation this year appears to be in its La Niña phase. This phase has led to higher rainfall in South Asia in the past.

Moetasim Ashfaq, a computational climate scientist at Oak Ridge National Laboratory in the US, confirmed: “La Niña, which has persisted for three consecutive years now, likely played a role in the excessive rainfall this year over Pakistan.”

According to Ashfaq, “2010 was a single concentration event in July while this year’s disaster is largely due to persistent rainfall in Sindh and Balochistan, where there is no proper infrastructure to deal with heavy rains. It is an extreme event.” He pointed out that as climate change warms oceans, it is also accelerating the evaporation of water and leading to heavier rainfall.

Saeed also dispelled the myth that Pakistan’s receding glaciers have played a role in the current floods. “I don’t have any evidence that glacial melt played a major role – the River Jhelum [which is fed by snow and some glacial melt in the mountains of Kashmir] has normal flows. These were rain-triggered floods.” He said one large and several minor glacial lake outburst floods in northern Pakistan had occurred much earlier, during the heatwave in March and April.

The latest bout of heavy rainfall over the past two weeks that flooded Sindh and Balochistan originated from a depression that emerged in late August in the Bay of Bengal. It made landfall in Odisha on India’s eastern coast and left a trail of destruction as it travelled through India before reaching Pakistan.

Mahesh Palawat from forecasting company Skymet Weather said in a briefing for Climate Trends about the depression: “It is a rare event as we do not see weather systems travelling in such a direction. This can be very well attributed to climate change, which has altered the track of monsoon systems… In the usual scenario, these systems tend to travel across northwest India and reach north Pakistan… However, due to change in movement of monsoon systems, we have witnessed extremely heavy rainfall over south Sindh and Balochistan.”

This movement of the monsoon system has led to drought in the Indo-Gangetic plains – India’s main food bowl – and simultaneous floods just to the south of this area this year. The drought has affected areas as far east as Rajshahi in Bangladesh. In India, the rice farming area is 8% smaller than last season due to lack of rainfall. India is responsible for 40% of the world’s rice trade and is the world’s biggest exporter.

This has come on top of the early March heatwave that already hit wheat production in India and Pakistan. Climate attribution scientists found that climate change made the heatwave 30 times more likely.

To rebuild, money is needed now

Saeed, who is one of the researchers on the climate attribution study, said: “To access climate finance we need a strong climate rationale and that’s where climate change attribution studies come in. To make a case for loss and damage at the upcoming COP [UN climate summit] we need to know the exact role of climate change in exacerbating the disaster.

“US$10 billion in damages was the assessment done after the 2010 floods. We still have to complete this year’s assessment of damages and it will be much bigger. Pakistan’s economy can’t keep taking these shocks. We have to take this case to the international community in Egypt this year with a sound scientific basis.”

The International Monetary Fund is hastening a bailout package for Pakistan after the floods. Some rich countries have announced grants. India has offered help but there is no decision yet on whether Pakistan will accept it. 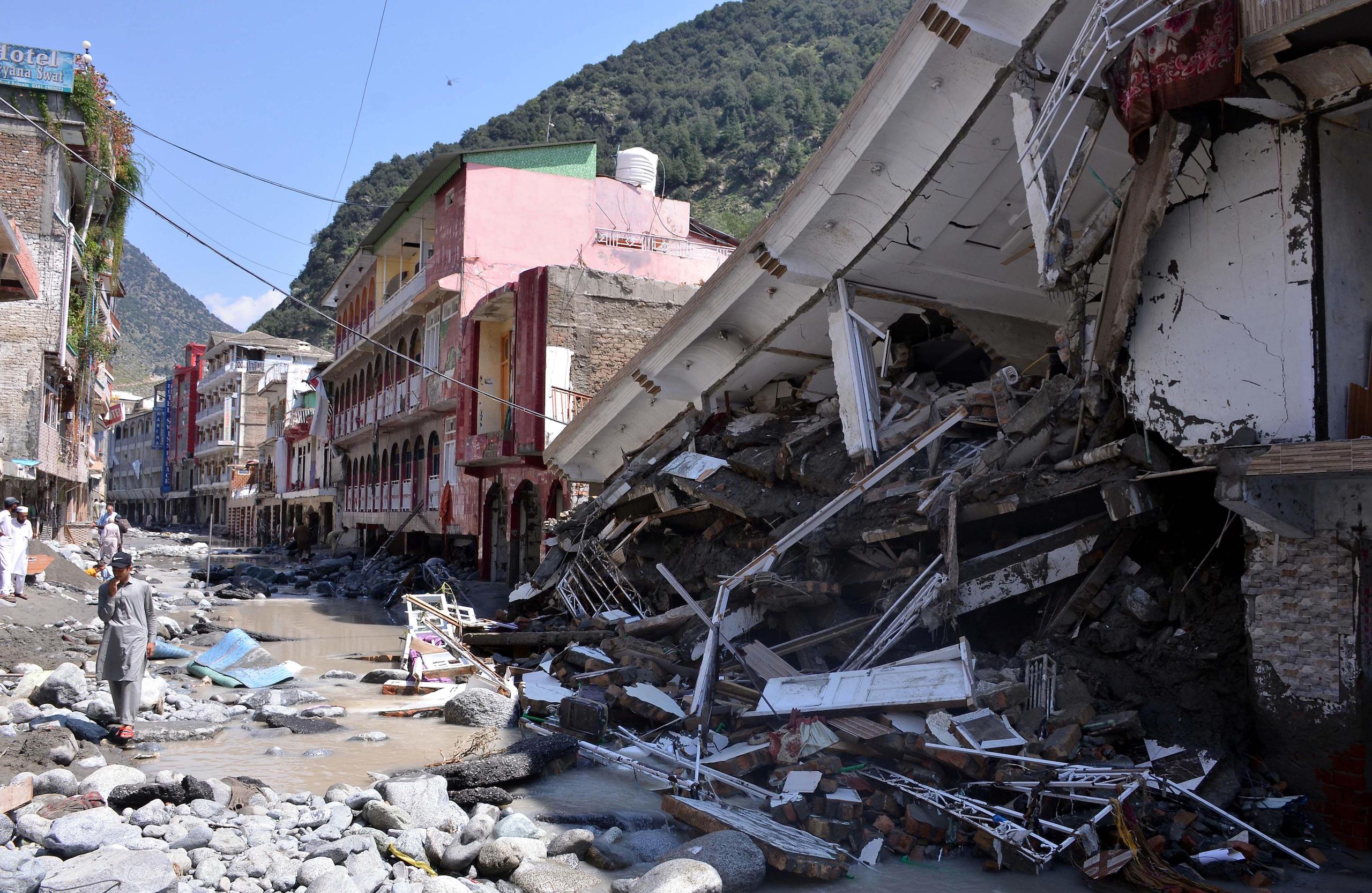 Buildings damaged by floods in northwest Pakistan’s Swat district, 5 September. As of that day, 1,314 people had been reported dead due to the flooding in the country. (Image: Saeed Ahmad / Alamy)

Then there is the question of reparations for the damage done by big polluters. Kashmala Kakakhel, a climate finance specialist who used to be on the executive committee of the UN’s Green Climate Fund, explained that there was nothing new about the concept within climate change negotiations. “Since the very beginning in the early 1990s, vulnerable countries have been calling on developed countries to provide financial assistance to help them address the consequences of climate change that go beyond what people can adapt to. Such proposals have been continuously snubbed by the developed countries.”

However, she said, the momentum for a “loss and damage finance facility” gained steam at the last climate summit in Glasgow, with some developed countries signalling support. “At the upcoming annual negotiations in Egypt, Pakistan should definitely join the already large coalition of climate-vulnerable countries advocating for a new finance facility or fund dedicated to loss and damage.”

Pakistan also needs to put its own house in order, learn the lessons from both the 2010 and 2022 floods and urgently start taking adaptive measures, said Saeed. He talked about the importance of having “proper drainage” in the south of the country.

Ashfaq of the Oak Ridge National Laboratory pointed out that cities and towns needed to adapt their infrastructure for extreme rainfall events, build protective flood walls and move homes away from riverbanks. For example, Karachi, the country’s economic hub, has no real infrastructure to deal with flooding.

“It’s a big challenge. Recovery from these kinds of floods takes several years. We need to learn from these disasters,” said Ashfaq.

This article was first published on The Third Pole.

How did Chinese media cover the Henan flood?