With up to 3,000 millimetres of annual rainfall, Hong Kong is one of the wettest cities in the Pacific Rim. The rains come in May with fog and mist blanketing the ceramic tiles and window frames of the city’s shoebox homes, soaking the densely packed city for the following five months.

Flooding and landslides are a major risk, particularly during typhoons and torrential rains, which happen at least ten times a year. Such extreme weather events are expected to become more frequent and of greater intensity in future. To prepare, the city is improving what is already one of the world’s most developed underground drainage systems. However, because climate change is making existing weather data and models redundant, planning new drainage infrastructure is especially challenging because the frequency and intensity of storms and floods cannot be accurately predicted.

When it pours in Hong Kong the city is protected from flooding by a large network of underground tunnels and storage tanks. Richard Leung Wah-ming, senior engineer at the Land Drainage Division of the Drainage Services Department (DSD), explains that the city’s flood control system has three major systems designed to protect it from events that happen once every 200 years.

Stretching beneath the city’s roads, pavements and crowded concrete buildings are four rain tunnels, each 5-7 metres in diameter, nestled into the mountain slopes. These tunnels divert heavy rainfall on the upland surface away from low-lying areas downstream. The waters are collected and reused in the city’s water system or drained into the sea.

Where population density is higher (in the “Mid Level”), three underground storm-water storage tanks collect rainwater. The largest, at Tai Hang Tung in West Kowloon, is over 10-metres deep and can hold 100,000 cubic metres of storm water, equivalent to about 40 standard swimming pools.

The storage tank beneath the Happy Valley racecourse is still under construction but once it’s completed in 2018, it will have a capacity of 60,000 cubic metres, enough to drain the 130 hectares of Wan Chai, Causeway Bay and Happy Valley, even in a 1-in-50 year weather event.

The storage tanks contain water level sensors, culverts and tide gauges that operate automatically based on real-time data of water flow and tidal levels. When the rainfall intensity is low, the weirs of the tank are kept closed and storm-water flows along the culvert.

When it rains heavily, the weirs lower to allow storm water to overflow into the tank for temporary storage. After the flood has passed, the weirs are lowered further to allow the stored water to flow back, while the remaining storm water is pumped out.

At the lower levels of the city and in rural areas, drainage channels have been enlarged and dredge sewers straightened, stretching out in a web 360 kilometres long – equivalent to the distance from Washington, DC to New York.

This underground concrete root system is meant to maintain the health and longevity of the city above ground. The sewers and storm-water drains extend as far as 1,700 kilometres and 2,300 kilometres, respectively. All major flood “blackspots” have been neutralised, and the number of danger points, posing varying degrees of risk, have been reduced from 90 in 1995 to just eight this year, according to the DSD. 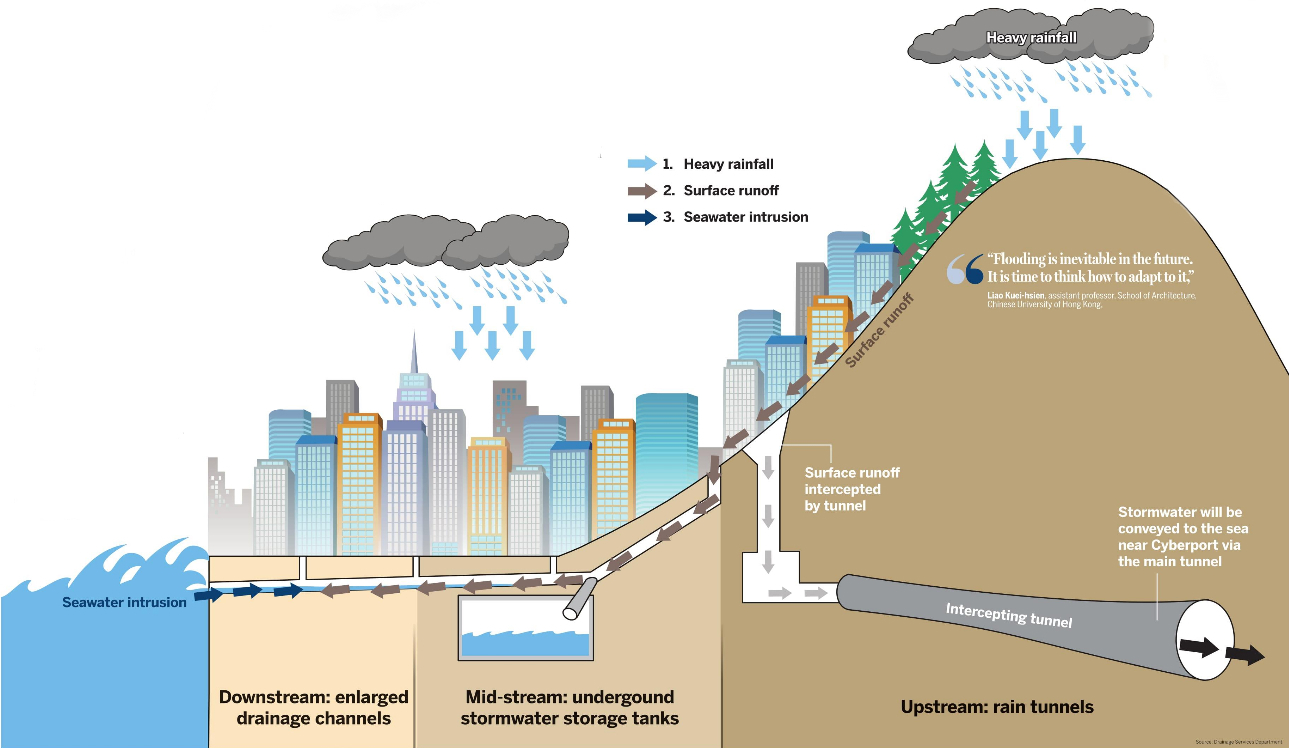 Even with its “world-class system”, Leung said that climate change poses a major challenge as extreme weather events increase.

Data from the Hong Kong Observatory shows that rainfall records are regularly broken. Previously, the maximum hourly precipitation record in the period between the 1880s and the late 1970s would stand for 40 years on average. This has fallen to less than 20 years between the late 1970s and the 1990s. From the 1990s to 2014, the records were broken every ten years.

According to the Hong Kong climate change report released in November 2015, the number of extremely wet years is expected to quadruple, from three during 1885 to 2005 to about 12 from 2006 to 2100. Leung said the DSD is using the combined data from the Intergovernmental Panel on Climate Change (IPCC) under the United Nations, and the Hong Kong Observatory to review Hong Kong’s flood prevention system.

“The capacities of the current rainstorm tanks and channels may not be able to hold heavy rainstorms in the future. Together with the changing land use and new urban design, we need to update the current systems,” Leung said.

“The most significant thing to consider for the future of flood prevention in Hong Kong, especially in urban areas threatened by climate change, is how to prevent floods caused by landslides and debris that leads to blockage of drainage systems,” said Chen Ji, associate professor at the Department of Civil Engineering at the University of Hong Kong (HKU).

On October 19, 2016, a “black” rainstorm warning was issued; the first during an October since the warning system was put in place in 1998.

The Hong Kong Observatory said the hourly rainfall exceeded 100 millimetres, far above the threshold of 70 millimetres for the black warning. The day’s total rainfall reached 223 millimetres. This is remarkable given that annual rainfall in the city is between 1,400 and 3,000 millimetres, depending on the district. 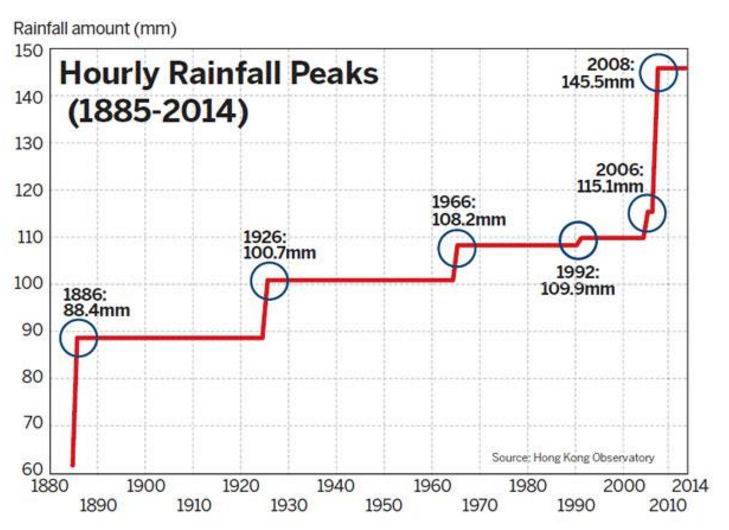 The downpour struck suddenly and caused floods in 14 areas. The waters were muddy and clay-coloured. This was history repeating itself, said Chen, recalling that heavy rainfall and floods six years earlier had resulted in a landslide that blocked the drainage system. Preliminary findings by the DSD confirmed that blocked drains cause major damage.

Responding to the Legislative Council on November 23, 2016, Secretary for Development Paul Chan Mo-po said, “[Tree branches and leaves] were washed down into the catch basins and storm-water drainage systems downstream by the severe rainstorm on October 19, resulting in blockage of the drainage systems, and hence undermining the overall flood-relieving capacities.” Further inspections and practical solutions to the problem are under review.

The problem with existing flood prevention standards that guide the planning and design of storm-water drainage systems is that they’re based on analysis of historical data.

“Due to the uncertainty of climate change, or even the natural system, the frequency and intensity of rainfall are hard to predict. It is highly possible that a 1-in-200 year rainstorm could become a 1-in-100 or 1-in-50 year event,” Chen said.

Rainstorms usually strike Hong Kong between May and September but last year there were successive typhoons and heavy rainfall in October, which is normally a dry month.This abnormal weather, Chen explained, was due to a strong occurrence of La Niña, an atmospheric phenomenon that increased the number of tropical cyclones and brought above-average rainfall to Hong Kong.

It is possible this phenomenon could become more frequent under the impact of climate change, Chen said. “So it is important to enhance the accuracy of seasonal forecasting of heavy rainfall in the dry season so that the DSD can take all precautions to mitigate the impact of floods.”

While scientists are working on ways to improve the accuracy of flood forecasting, architects are beginning to work on the assumption that flooding will happen regardless.

“Flooding is inevitable in the future. It is time to think about how to adapt to it,” said Liao Kuei-Hsien, assistant professor in the School of Architecture of the Chinese University of Hong Kong.

The solution is to design areas that are floodable and ensure that public space, especially in urban areas, is multi-functional so it can be used at times of heavy rain to store water. Flooding is a natural phenomenon argues Liao so city planners and architects should be focused on reducing flood hazards, the threat of flooding to human beings, and flood disasters, which cause damage to residents and the economy. It is important “to increase the resilience of the city and to prevent flood hazards from becoming flood disasters,” said Liao, explaining that resilience means a flooded city can recover quickly.

“We’ll be living in an environment where flooding is natural. So we need to get used to it. Just let it flood.”