Eleven years ago, graffiti artist Thiago Mundano had his first encounter with one of Brazil’s 800,000 informal waste pickers, or catadores, when he asked for permission to paint the underside of a São Paulo flyover.

“What do you mean you want to vandalise my home?!” said the angry catador, who was sleeping on the pavement.

In order to avoid a conflict the artist quickly responded: “Can I paint your trash cart? If you don’t like it, I’ll paint over it.” With permission granted, Mundano not only brought colour to the catador’s cart, but etched the phrase that would become the mantra for a successful partnership: “Your trash is my treasure.”

Days later, Mundano received a phone call from a friend saying he had seen a cart bearing his signature, or “tag”, on the other side of town.

In getting the catador and his work noticed, Mundano realised he was helping someone, he said. He also realised that the carts could be mobile canvases.

Over the next five years, Mundano and his friends decorated carts with messages of appreciation for catadores and the environment: “A catador is worth more than an environment minister,” “My work is honest, how about yours?” and “For each tonne of cardboard collected, 20 trees are not cut down”. 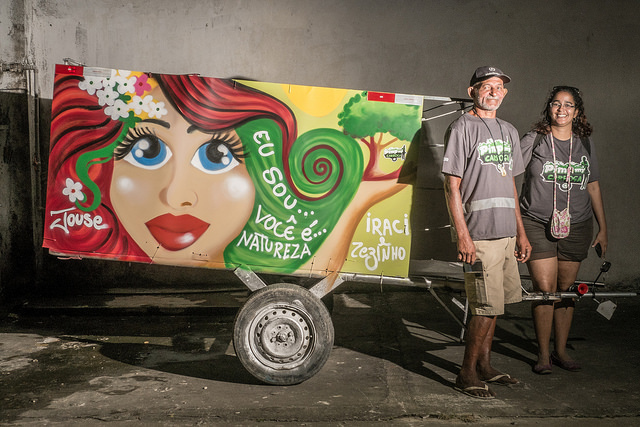 Closer contact with catadores led Mundano to want to do more and Pimp my Carroça (Pimp my trash cart) was born. Mundano and his friends crowd funded an event in the centre of São Paulo where they repaired and painted carts with graffiti while the catadores could see doctors, psychologists, barbers, and massage therapists. According to Mundano, the event aimed to raise awareness of catadores’ work and give them a sense of self-worth. Pimp my carroça has since held events all over Brazil and, more recently, in Bogotá, Colombia.

But the movement is not limited to Latin America or even developing countries. Pimp my Carroça has become a huge mobile art exhibition, extending to the US and Japan, with the potential to reach 20 million catadores worldwide.

According to Brazilian government estimates, catadores are responsible for 90% of recycling that takes place in the country. São Paulo, a megalopolis of some 12 million inhabitants, produces 18,000 tons of rubbish per day. Yet it falls on the city’s 20,000 catadores to ensure that the 1% that is recycled does not go to waste. “Catadores are invisible workers,” Mundano said, adding that although their vocation is recognised by the Brazilian Ministry of Labour, they still lack the most basic equipment necessary for the job. Many have no rubber-coated gloves, raincoats, reflective tape, mirrors or horns for their carts. Worse still, catadores have no workers’ rights and generally face widespread discrimination.

“I was born in the dump. I don’t really remember my father or my mother. But I remember playing with the toy cars I found at the dump,” Sergio da Silva Bispo, a São Paulo catador originally from Salvador, told Diálogo Chino. “I ate what I found there. I ended up becoming an alcoholic.”

“The money that I made selling cans I picked up on the street I spent on booze. Then one day, I was in a bar in Salvador, and saw an advert on TV saying that São Paulo was the land of work. I asked the bar owner what I had to do to move there, and he answered: just start walking,” Bispo recalls.

Illiterate and with no idea of the distance involved, Bispo walked the 1,846 kilometres between the two cities over 80 days. He moved into one of the buildings occupied by squatters in the city centre and went back to collecting aluminium cans, carrying a bag on his back until he could afford a cart.

Bispo’s charm earned him prominence among the other catadores in the city centre streets. The Franciscan church and the renowned Getulio Vargas Foundation also took note of Bispo and his group, offering to teach them how to make carts and about workers’ cooperatives. 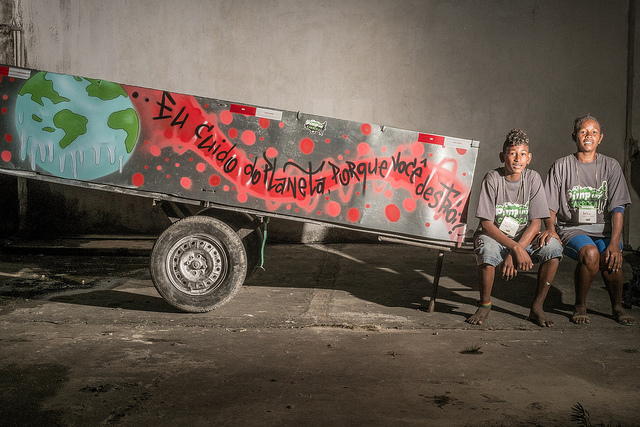 "Do I look after nature because you destroy it?" (Photo: Pimp my carroça)

They also became well-versed in the environmental importance of recycling. Bispo gave a speech on the catadores’ work at the World Social Forum. Whilst there, he also learned more about the environment. Bispo organised his fellow catadores and today heads the collectors’ cooperative Cooper Glicério.

Bispo calculates that he alone has prevented the felling of 63,190 trees, saved 244,140 litres of oil and 514,550 kilos of iron ore because of the paper, card and cans he has collected.

With the Pimp My Cart partnership, the catadores have become more visible and now speak about their work at schools and businesses. “These are two marginalised professions,” Mundano said, referring also to graffiti art, “so the union was natural,” said Mundano.

Although the Brazilian government has a law for solid waste and commissioned studies on the potential of catadores, there are no policies to promote working as a catador in the country.

Bispo said it is vital that everyone involved in the process of recycling benefits from it, but adds there is still a lot of exploitation. Middlemen who purchase from individual catadores pay very little and sell the same product for 100 times the price. Doing away with the middleman is one of the goals of the group.

Bispo, who has been to France, Portugal, Chile, and Argentina, is now heading to the Netherlands to talk about recycling and the environment.

This article was originally published on Diálogo Chino.

Speaking out against air pollution through "smog art”