A prayer for clear air - China Dialogue
Skip to content

Persistent smog has left Beijingers short of breath. So on Tuesday afternoon over 20 performance artists put on anti-pollution masks and held a mass prayer for blue skies at Beijing’s Temple of Heaven to call for more public concern for the environment. For the Chinese, the temple is a symbol of the link between humanity and the heavens.

Photographer Wu Di told chinadialogue that the message from his photos of the event is that we must revere the universe and nature. China may have a rapidly growing economy, but life itself is still the most important thing.

“Our ancestors had great reverence for the universe, and the Temple of Heaven is sacred in China,” art critic Du Xiyun told chinadialogue. “This is where they prayed for blessings…And the artists stood outside, in the pollution, to call upon the public to show concern for the environment and their own health.”

When asked why none of the participants were actually kneeling in prayer, Du said, “Nowadays China has no particular faith, so there are no rites or ceremonies to follow. So the performance reflected the ‘fuzzy faith’ of modern China.”

According to Du, faith is a sense of reverence for an unknowable universe. But today the Chinese have no awe of nature, and this has led to an environmental crisis.

Last year at the Yabuli Chinese Entrepreneurs Forum, president of e-commerce company Alibaba, Ma Yun, said that Beijing’s smog was not just due to rapid development or government failings – it was due to Chinese society’s lack of faith, gratitude and reverence.

A severe air pollution warning was issued in Beijing on February 20, remaining in effect for a week. The alert was classed as “orange”, the second-highest level, for five and half days.

Zhang Dawei, head of the Beijing Municipal Environmental Monitoring Centre, said that this was the longest period of heavy pollution since Beijing started measuring PM2.5 levels in 2012. The longest period in 2013 was five days in January. 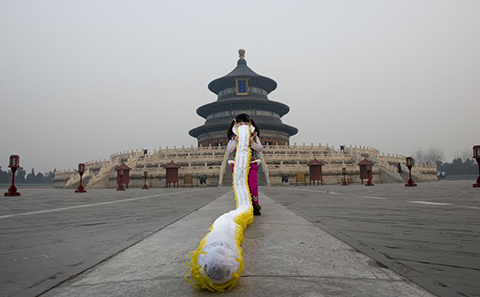