The kitchen waste of some Beijingers is being processed in a most unusual manner. Residents of Vanke Xishan Courtyard take any uneaten food to a small building where it’s transformed into products including fish-feed and plant fertiliser. The 10m2 brick building is spotless and without a whiff of rotting food. The secret weapon? Maggots.

It is fast becoming compulsory for citizens to sort their household waste in China’s major cities. The most difficult to deal with is kitchen waste, also known as wet waste, which is a big concern for city bosses. Could insects be employed to deal with it “in-house”? The initial signs in Beijing are promising though a market for the fattened larvae is yet to properly mature.

From kitchen waste to organic products

In just 24 hours, 10,000 black soldier fly larvae can consume a whopping 800 kilograms of kitchen waste. They breed quickly, are easy to look after, don’t cause disease, and can produce antimicrobial agents – making them a good source of insect protein for animal fodder, and useful in make-up or topical medications.

Kitchen waste from residents of Vanke Xishan is sorted and pulped before being fed to the larvae. On the eighth day, when the larvae are mature, they are harvested.

Most are then returned to the supplier, Beijing Canfit Resource Recovery Technologies. The remainder goes to a waste-recycling centre, to be used to feed fish, with the water from the fish ponds then used to irrigate crops.

The larvae’s excrement can be used as fertiliser. “We collected 210 bags of organic fertiliser last year alone,” said Li Yingqing, an employee of the company who manages the operation. That fertiliser has been used to plant flowers around the grounds of the apartment complex, or given to residents who have helped by sorting their waste correctly. 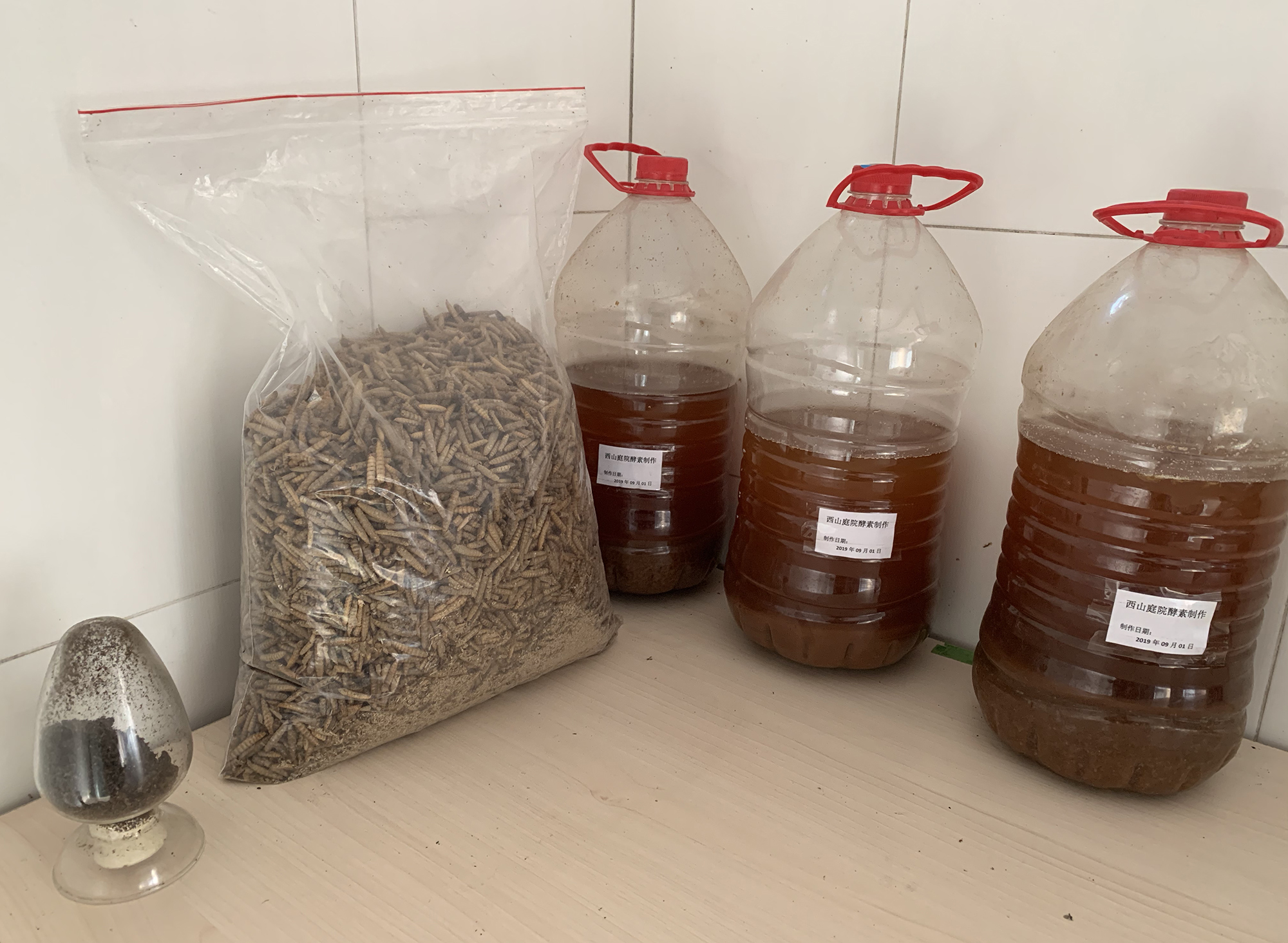 Zhang Xiaoling is one of those enthusiastic waste-sorters, and supports the larvae experiment: “Using the larvae to reduce kitchen waste is good for the environment, and produces environmentally friendly fertiliser.”

Chen Yimei, secretary of the Vanke Foundation, which funds the project, explained that in August last year the foundation and Canfit Technologies visited Bangalore, India, to see distributed waste-processing in action. “When we came back we started thinking about working together on it here in China.”

The project was prompted by China’s promotion of waste-sorting in its cities. In 2017, the State Council instructed 46 major cities to have compulsory waste-sorting systems in place by the end of 2020. This year, Shanghai became the first to do so. In October, Beijing published a consultation draft of waste-management rules, including fines for waste-sorting refuseniks and integration with China’s social credit system.

With all the focus on waste-sorting, there’s been heightened interest in what then happens to that waste. Over 60% of domestic waste comes from people’s kitchens. Through various means it be turned into resources including organic fertiliser for crops, or biodiesel for cars.

Research into using maggots, worms and even cockroaches to turn kitchen waste into useful products are being trialled in Beijing and beyond.

They may seem like a brilliant solution, but how practical and scale-able are black soldier fly larvae?

Chen Liwen, founder of NGO Zero Waste Village, says it’s better to use kitchen waste as fertiliser directly, without the intermediate stage of consumption by insects, as microorganisms can break it down into a plant-friendly state. Otherwise “once you’ve dealt with the waste, you have to deal with the insects”, she says.

Dr. Zhang Hong, a consultant with Zero Waste Village, said that “the insects can be sold as an intermediary product, creating a commercial opportunity, but you need merchants willing to buy them.”

Liu Yusheng, a professor at Shandong University, is supportive. He says that using kitchen waste as a fertiliser squanders the proteins and fats found in it, and also produces leachate, which is hard to deal with. Insects are very effective at converting proteins and absorbing moisture. He admits the larvae are unable to fully digest certain staples such as grain and so believes other organisms should be used alongside them.

But Liu Yusheng is opposed to community-scale handling of kitchen waste. “People concerned about the environment like to have it happen locally, but most people don’t understand the need, or are even scared of it.”

Chen Liwen thinks it still isn’t clear if distributed urban waste-handling models like this are economically viable. Well-run industrial composting facilities already operate outside Chinese cities, and it makes more sense to send the sorted kitchen waste there, she says.

Chen Te, in charge of the project at Vanke Xishan Courtyard, thinks the government doesn’t have the necessary capacity to transport and process all the kitchen waste. “Currently, all the different types of waste are mixed up. If you did use it as fertiliser, I’m not sure it’d do much good.” Chen Te and his team are planning to expand the project to other communities.

Xin Kai works for Canfit Technologies, drying the larvae the company buys back and selling it at 9,000 yuan (US$1,300) a tonne, though “currently we don’t sell it all, we don’t have the customers.” They are still in search of that final link in the larval chain.

“The project is reliant on funding from the Vanke Foundation and Canfit Technologies, and it will be hard to keep going in the future without government subsidies or charging residents waste-handling fees,” said Chen Te. “The next step is to focus on commercial viability, completing the industrial chain, government policy and finding suitable locations.”

Could China’s cement industry be fuelled with household waste?