China’s electric vehicle industry is entering a new phase of accelerating development, President Xi Jinping wrote in a congratulatory message to participants of a new energy vehicle conference in early July. In 2018, China sold almost as many electric vehicles as the rest of the world combined. At the same event, the chairman of Chinese electric vehicle giant BYD upped the ante, challenging China to electrify all passenger vehicles by 2030.

New energy vehicle sales are booming, but they still only amounted to 2.5% of car sales in China in 2018. Could all sales feasibly be electric within the next decade?

(as defined by the Chinese government)

A recent report from the Innovation Centre for Energy and Transportation (iCET) made the first public proposal of a timeline for the phaseout of petrol and diesel vehicles across China. According to the Beijing-based thinktank, 2030 is premature, but an entire phaseout could be possible by 2040. However, the report also highlights significant uncertainties ahead, including whether consumer appetite for electric vehicles will wane when government subsidies are cut.

Why phase out traditional vehicles?

Starting in 2016, regions and countries around the world began proposing an end to driving as we know it. China’s vice minister of industry and information technology made waves when he announced in 2017 that China, the world’s largest car market for the past decade, was researching a phaseout of petrol and diesel vehicles.

The news followed a steady drumbeat of policies supporting the growth of China’s new energy vehicle industry in recent years. From generous government subsidies to driving restriction exceptions in China’s congested cities, the government has been coaxing the industry along. 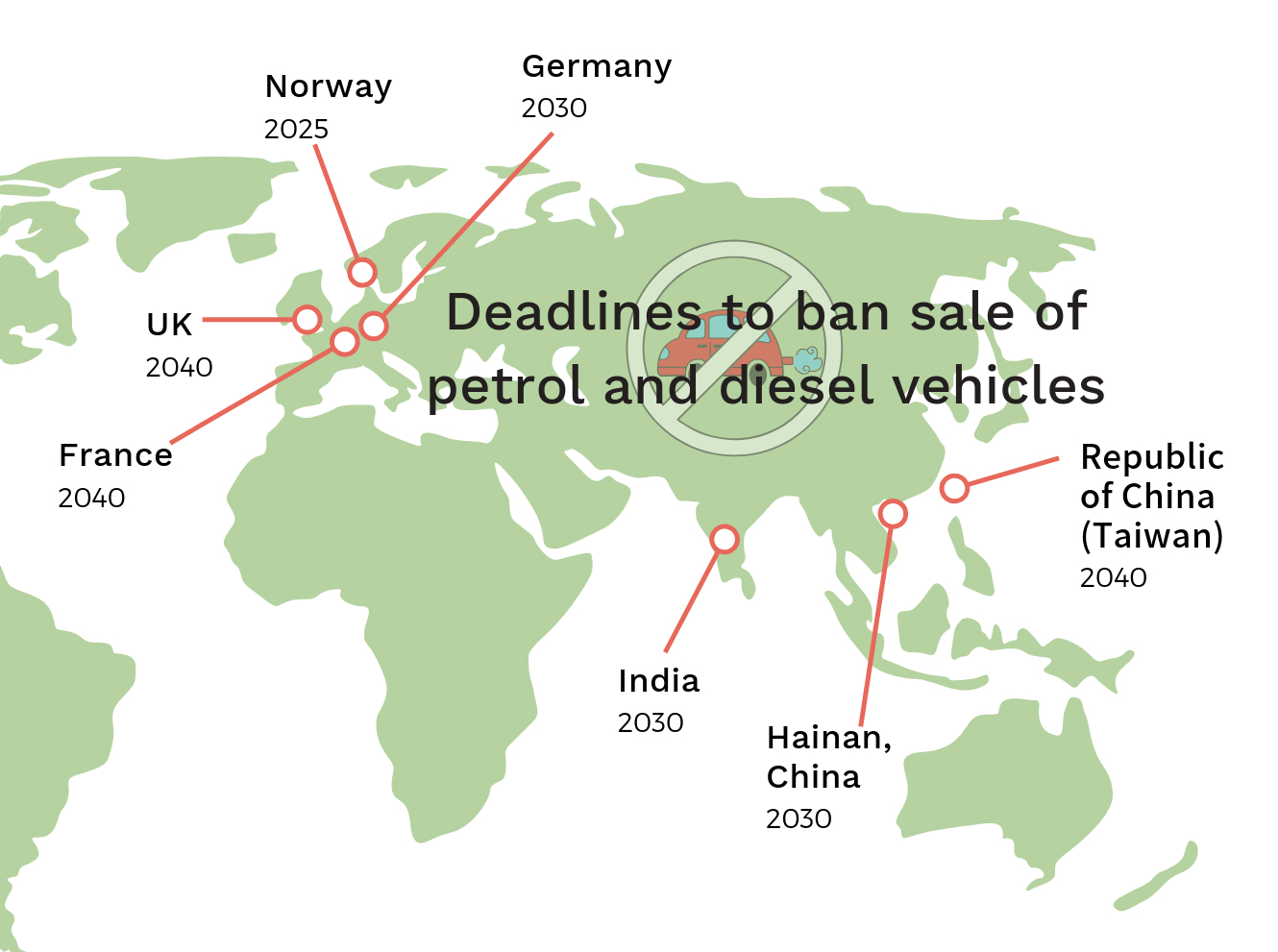 China has much to gain from phasing out all petrol and diesel vehicles. For one, the country relies on imports to meet 70% of its crude oil demand, 42% of which is consumed by vehicles. Petrol and diesel cars also have a major impact on public health. They are among the main perpetrators of air pollution in many of China’s cities. As car ownership has climbed, increasing oil use has also contributed to China’s rising greenhouse gas emissions.

Is a phaseout possible?

Hainan, the island province in China’s south, has emerged as a green pioneer in recent years. In a plan released in March this year, it became the first region in China to set an official date for the phaseout of petrol and diesel vehicles.

Hainan has its sights set on 2030, but the rest of the country is unlikely to meet that deadline according to iCET’s report. The group built a model based on China’s automobile industry trends, national policies and oil consumption under a scenario of limiting global warming to under 2C, and proposed a phaseout timetable accordingly. The timetable states that smaller petrol and diesel passenger vehicles will be phased out between 2020 and 2040. Larger “commercial vehicles”, such as buses and trucks, will follow, so that all petrol and diesel vehicles are phased out by 2050.

The study proposes an incremental phaseout based on the type of vehicle and region. The largest cities that already have strong electric vehicle markets are prioritised along with cities suffering the most from pollution, while relatively underdeveloped regions are given more time to make the transition. Taking the lead will be government-owned vehicle fleets, followed by private vehicles, which will allow some time for costs to come down further for alternative vehicle technologies. The majority of passenger vehicles will be replaced by new energy vehicles and non plug-in hybrids (like the Toyota Prius) according to the study.

Taiyuan, an industrial city in west China, has already demonstrated this model by electrifying its taxi fleet. Shenzhen followed suit this year. However, Li Wanli, formerly of the Ministry of Industry and Information Technology, commented at the report launch: “I personally think the proposed timetable is too early and tight for privately owned vehicles.”

He also cautioned that the study’s suggested approach may pose problems. Citing fuel efficiency standards being rolled out regionally right now, he said the piecemeal approach has caused headaches for manufacturers and is a case to learn from.

Although the study’s timetable aligns with current policies and projections, the authors elaborate that several uncertainties could influence China’s path. The electric vehicle industry is in the midst of a major transition. Subsidies have long been boosting sales, accounting for 20-35% of the take-home sale price for manufacturers in 2016. Now, the government has decided to wean the industry off the handouts, likely entirely by 2020.

This shift could dampen consumer appetite. Projections show that electric vehicles could reach price parity with petrol and diesel vehicles by 2030, but for now they will likely remain out of reach for many Chinese buyers without government support. The Tesla Model 3, for instance, is being advertised as a vehicle for the mass market. But its price tag is still about US$15,000 above the average car in China.

Whether enough alternative cars can be produced is also moot. Production of new energy vehicles is slightly above sales in China, but even at over one million sales in 2018, it is dwarfed by the market for conventional vehicle. To encourage production, this year China is introducing a national production policy for large manufacturers. The system is slightly more complex than a pure quota, but it essentially requires automakers to meet production targets for 2019 and 2020 or buy credits from overperforming companies. The policy is expected to double new energy vehicles’ share of sales, according to Bloomberg New Energy Finance, but no quota has been set for after 2020.

Whether infrastructure can keep up with the phaseout is also a looming question. Building out enough charging stations to supply a rapidly expanding electric vehicle fleet is a government priority, and an unprecedented challenge. The power grid may also struggle to keep up with charging if demand is not timed intelligently. A Natural Resources Defense Council (NRDC) study found that peak load on the grid could increase 58% by 2030.

The iCET study finds that greenhouse gases and air pollution would be reduced significantly if their timetable is followed. A study by the China Automobile Technology Research Centre found that phasing out petrol and diesel vehicles would lead to a 41% drop in nitrogen oxide and a 35% drop in particulate matter emissions in 2050, compared to a 2017 baseline. Based on the iCET study, end-user greenhouse gas emissions would fall 51% in 2040 and 77% in 2050 while lifecycle emissions (including from electricity generation) would fall 55% in 2050.

However, electric vehicles are not without their own environmental hazards. Battery supply in particular has raised red flags. Currently, battery recycling remains very low due to there being diverse battery types and an unwillingness from recyclers to take responsibility for safety risks. The iCET study warns that if a better recycling system is not established, lithium, cobalt and manganese in the batteries could cause significant damage to public health and the environment. Dealing with this blockage in the electric vehicle lifecycle could slow down the rollout, the authors argue.

The government has set a number of long-term targets for new energy vehicle production. The most ambitious is for them to account for 40% of car sales by 2030. Will China ratchet up the pace by setting a phaseout target on top of that?

Hainan has already fired the starting gun. However, its vehicle market is relatively small (the province has about one sixth as many cars as Beijing) so it will not be as significant an undertaking there. A Caixin article suggests that Beijing might be a good candidate to follow Hainan’s example as it has led in the establishment of other new energy vehicle policies in the past.

At the report release, Wang Baixia, one of the drafters of Hainan’s phaseout plan, said having a target would send a strong signal: “A timetable is still needed, for the government and companies, everyone needs such a timetable (…) this long-term expectation is very important.”

The government is working on a 15-year new energy vehicle development plan, which may provide further clarity on its phaseout plans.