It was raining heavily in Shanghai on the morning of July 1. But two volunteers, women clad in raincoats and rubber boots, were up early to stand by the bins and talk to the residents dropping off their rubbish: “Watermelon peel? Wet waste goes over there.” It was clear nobody was going to be able to continue dumping their bags in whichever bin was closest.

This was the day new rules came into effect in Shanghai, marking a new era of compulsory waste-sorting.

Since 2000, waste-sorting systems have been trialled in eight cities across China. But a failure to cultivate the habit among residents and to maintain the separation of waste after collection have brought those trials to nought.

Then in 2017, with China promoting its “ecological civilization” concept, the government issued plans for compulsory waste-sorting and a new push started. In November 2018, Xi Jinping said on a visit to Shanghai that “waste-sorting is the new fashion.” The city has become China’s waste-sorting pioneer.

In the weeks before 1 July there was debate nationwide about the new rules, and the Shanghai municipal government made it clear they should be taken seriously. The city’s compulsory waste-sorting system will inform and guide other cities.

China has already overtaken the US to become the world’s biggest producer of waste. And like China’s other large cities, Shanghai is at risk of becoming encircled by landfill sites. In 2018, 26,000 tonnes of domestic waste were collected from the city every day. The bulk of that domestic waste goes to landfill sites or is incinerated. Shanghai’s Laogang Waste Processing Site is Asia’s largest, handling 20,000 tonnes of waste a day, 70% of the city’s total.

China’s domestic waste has always mainly been kitchen or “wet” waste. In Shanghai it accounts for 60% of the total, and that creates fundamental difficulties. Traditional disposal methods, such as burying or incineration are less effective with wet waste: in landfill it causes secondary pollution from leachate and methane; when incinerated the moisture content creates toxins such as dioxins, which means nobody is willing to have new incinerators built in their backyard. Separating wet and dry waste at the source can reduce the amount landfilled and incinerated, and make both those processes more efficient. Separated kitchen waste can then be turned into resources such as compost or methane.

But while separating wet and dry waste may sound simple, it has proved harder to do in practice. Shanghai started a new round of trials in 2011 and eight years later bringing locals on board remains a huge challenge. The same will go for the new rules.

How clear is the guidance?

Anyone who has looked at Shanghai’s rules for sorting waste could be forgiven for feeling confused. A dried-out chicken bone is “wet waste”, a soaking-wet nappy is “dry waste”? The run-up to July 1 saw numerous discussions about how certain items should be classified.

Industry insiders say that Shanghai’s wet/dry distinction isn’t clear enough, and that it would be more useful to explain to the public how the different types of waste are used. Wet waste refers to organic waste which will rot – such as vegetables, nut shells, leftover food – and can be composted. Dry waste refers to what will not rot, is not toxic and cannot be recycled.

“The wet waste category used in Shanghai is close to the kitchen waste category used in other cities,” said Zhang Miao, founder of Rcubic, a social enterprise working to solve recycling issues. “The wet/dry terminology can easily create confusion … we should explain how the different types of waste are handled, and then residents will be better able to cooperate.”

Sun Haiyan, founder of Business Ecology, thinks it is important to tell people where their rubbish ends up when publicising the scheme. “The public needs to know their waste sorting is useful,” she says.

So where does it go?

Sometimes sorted waste ends up mixed together when it is collected. This is why residents have proved unenthusiastic about many of China’s waste-sorting trials.

The scheme does not rely on totally new ideas or infrastructure. Shanghai has been gradually rolling out “end-to-end separation” since the new round of trials started in 2011. That means the city’s waste has for some time been kept separate when deposited, transported and processed. And the capacity needed to deal with the amounts of wet and dry waste produced was mostly in place before the new rules came into effect. 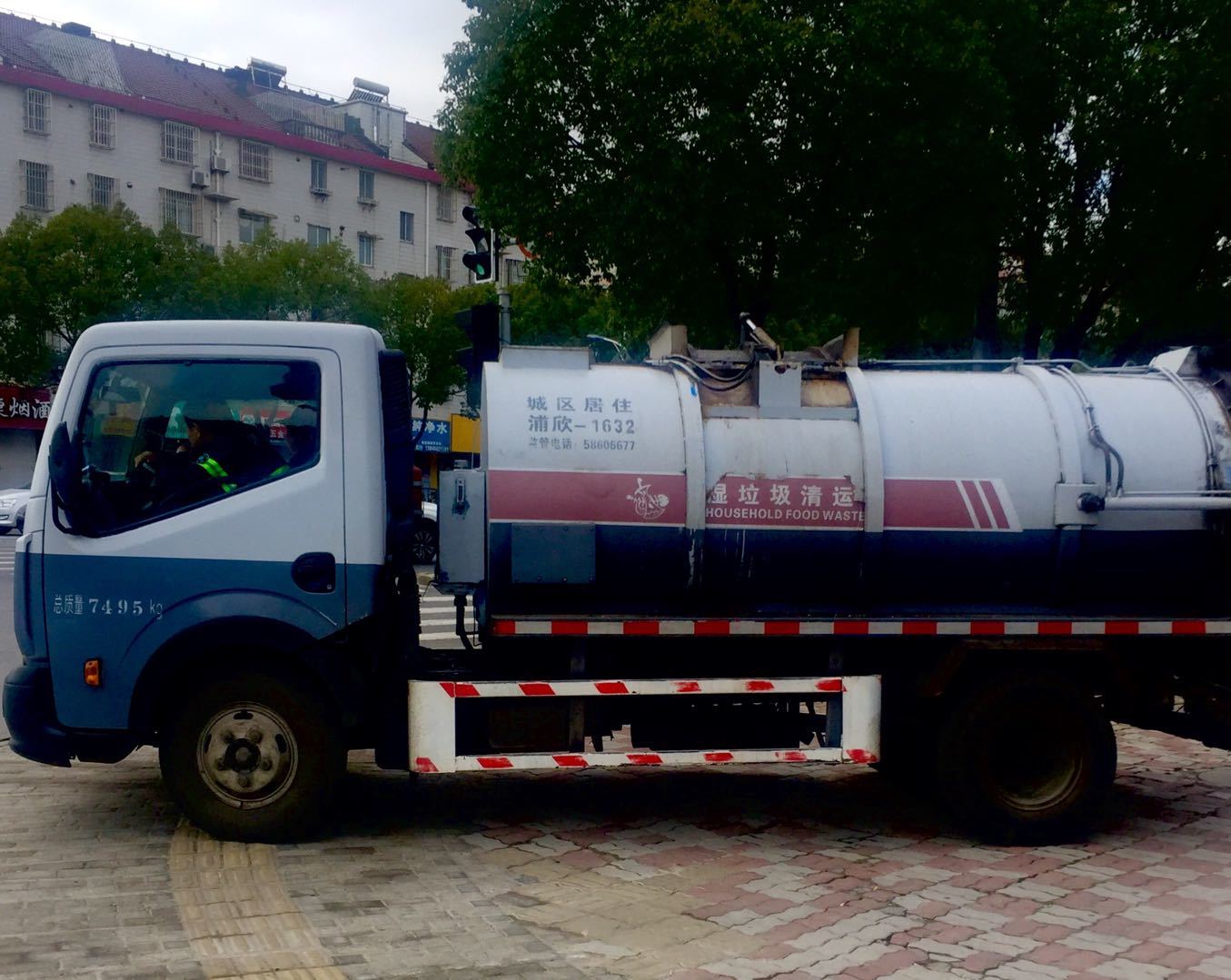 Vehicles for collecting food waste have been at work in Shanghai for years. (Image: Ma Tianjie)

You Wenjian, deputy head of Jing’an District’s Landscaping and City Appearance Bureau, says almost all the district’s wet waste is properly handled. “We signed government services procurement contracts with two firms, which take the wet waste to make a fertiliser base for use in forestry. That was working prior to July 1.”

Meanwhile, recyclable waste is collected via 3,000 recycling points placed alongside the collection points for wet and dry waste. You Wenjian explained: “We encourage local sanitation workers to collect and sell off high-value recyclable waste. The government takes responsibility for low-value recyclables, offering subsidies to make collection and recycling profitable for third parties.”

But there will be capacity shortages once sorting begins. You Wenjian said “shortages of capacity are inevitable once sorting becomes compulsory.” This has been confirmed by the municipal government: Huang Rong, the city’s deputy party secretary, said in an interview that Shanghai “produces 6,164 tonnes of wet waste per day, and can convert about 5,050 tonnes into resources.” There are still huge challenges to make sure waste-processing capacity can keep up with the city’s waste output.

Hao Liqiong, project director with Jing’an Aifen Environmental Consulting Centre, commented that “waste-handling capacity has been expanding, but residents need to do the sorting. The two processes are complementary.”

Getting people on board

People in Shanghai don’t just have to sort their waste – it also needs to be deposited in certain places at certain times, and the number of bins available has been reduced. Bins are now kept at particular locations, which are only open at certain times. People can now be fined between 50 and 200 yuan (US$7-30) for breaking the rules, while companies can be penalised up to 50,000 yuan (US$7,300).

Those sanctions were needed on the very first day. On July 1 Shanghai officials made 3,600 visits to check on 4,216 neighbourhoods, hotels and businesses, with 623 warning notices issued. The risk of actual punishment is the biggest difference with earlier trials.

But enforcing waste sorting is expensive. Initially some neighbourhoods will have attendants watching the bins to ensure waste is properly sorted and deposited, with the bins locked when no attendant is present. This is inconvenient for residents, and community representatives have called for local volunteers to come forward.

As Hao said: “Waste sorting isn’t just about the law. There are two other forces at work: conscientiousness on the part of the residents, and support and monitoring by the neighbourhood.”

Shanghai’s NGOs and other social groups have been involved in promoting waste sorting. Hao’s organisation has been encouraging waste sorting in neighbourhoods for over a decade. Their experience has shown the most important factor in success is interaction between residents.

“Research shows that engaged volunteers are more effective than posters,” said Li Changjun, a post-doctoral student at Fudan University’s Department of Environmental Science and Engineering. He is a member of a team that since 2012 has been looking into what brings about long-lasting waste-sorting behaviours. Their research has shown volunteers encouraging other residents to sort waste to be the most important community-level factor. Policies offering material rewards, such as points-based systems, don’t have any significant impact.

Professor Marie Harder, head of that research team, thinks that there should be a move away from thinking only about punishments. “If some people feel uncomfortable with the specific time or place, or have new ideas about the waste separation, they should have a discussion with their community.”

Media street interviews have found that neighbourhoods where waste is successfully sorted always have a high degree of community awareness and enthusiasm. “Waste sorting is a public matter, rather than a case of monitors and the monitored,” said Sun Haiyan. “Ultimately it should be realised through community building, by improving the capacity of self-governance.”

China plans to have waste-sorting systems in place in 46 cities by the end of 2020, and in most major cities by 2025. What happens in Shanghai will guide that process.