On 28 March, China published a policy document on further greening the Belt and Road Initiative (BRI). It is the third policy document on this theme issued by the government in less than a year, so one can be excused for finding it difficult to keep up.

The new document – “Opinions on Jointly Promoting Green Development of the Belt and Road” – was jointly issued by the National Development and Reform Commission, and the ministries of foreign affairs, ecology and environment, and commerce.

To us, three things stand out and go beyond the two previous documents, issued in July 2021 and January 2022:

The language on Paris alignment and green energy systems is particularly important. In our understanding, it means projects in the BRI should be selected and designed such that they are consistent with keeping warming of our planet well under 2C by the end of this century.

It therefore goes beyond the position on coal – made clear by President Xi’s pledge in September 2021 to end Chinese support for new coal power projects overseas – to mean careful assessment of all high-emissions projects. The relevance to humanity couldn’t be greater: the UN has just released a scientific report which shows the world must step up climate action “now or never”, otherwise temperatures could soar by more than 3C, with catastrophic consequences.

Given the turbulent geopolitical environment of today, it is reassuring to see that China isn’t backsliding on its efforts to green the BRI. And the document is much broader than climate, covering the development of “green” infrastructure projects in power and transportation, industry and manufacturing, as well as green finance and cooperation on standards within the BRI.

Such “Opinions” have no legal weight and cannot be enforced in court, but they do set a clear direction for the government departments, state-owned and private companies, and financial institutions involved in the BRI.

The document is of a different type to the previous two which were titled “Guidances” (指引 zhǐyǐn, 指南 zhǐnán) for the green development of BRI projects. Instead, “Opinions” (意见 yìjian) are official documents that “provide insights and solutions to important issues”. They are forward-looking, and are likely to be followed by documents regulating or guiding their implementation. Knowing that, and given the repeated signals from President Xi and other leaders, we expect the document will be carefully read, and implemented, by all key stakeholders, including project developers and financial institutions.

These particular Opinions draw on the technical studies conducted by the BRI International Green Development Coalition (BRIGC), an organisation which has worked to advance environmental protection and low-carbon development in the BRI since its establishment by the Ministry of Ecology and Environment and international partners in 2019.

These documents set a clear direction for the government departments, companies and financial institutions involved in the BRI

The authors of the present article have worked with partners to support the BRIGC to develop a “traffic light system” for greening the BRI, to help avoid and mitigate environmental impacts throughout a project’s life. Projects with a significant environmental or climate impact that isn’t mitigated are classified as “red”, whereas projects that are neutral or make a positive contribution are classified as “yellow” and “green”. Much of the credit for the three recent official green BRI policy documents should go to the teams at BRIGC and the China Council for International Cooperation on Environment and Development.

The document’s Article 14 is sure to be the most keenly read, as it is the first official interpretation of Xi Jinping’s pledge to no longer build new coal-fired power plants overseas.

Apart from prohibiting new plants, the article mentions guidance to “…prudently proceed with existing ones that are under construction”. Behind the scenes, a debate is likely ongoing about exactly how to deal with existing projects, and exactly where to draw the line on “new projects”. The text suggests that projects which haven’t started construction should not proceed – even if they are already in advanced stages of design and financial preparation, such as the Gwadar project in Pakistan. 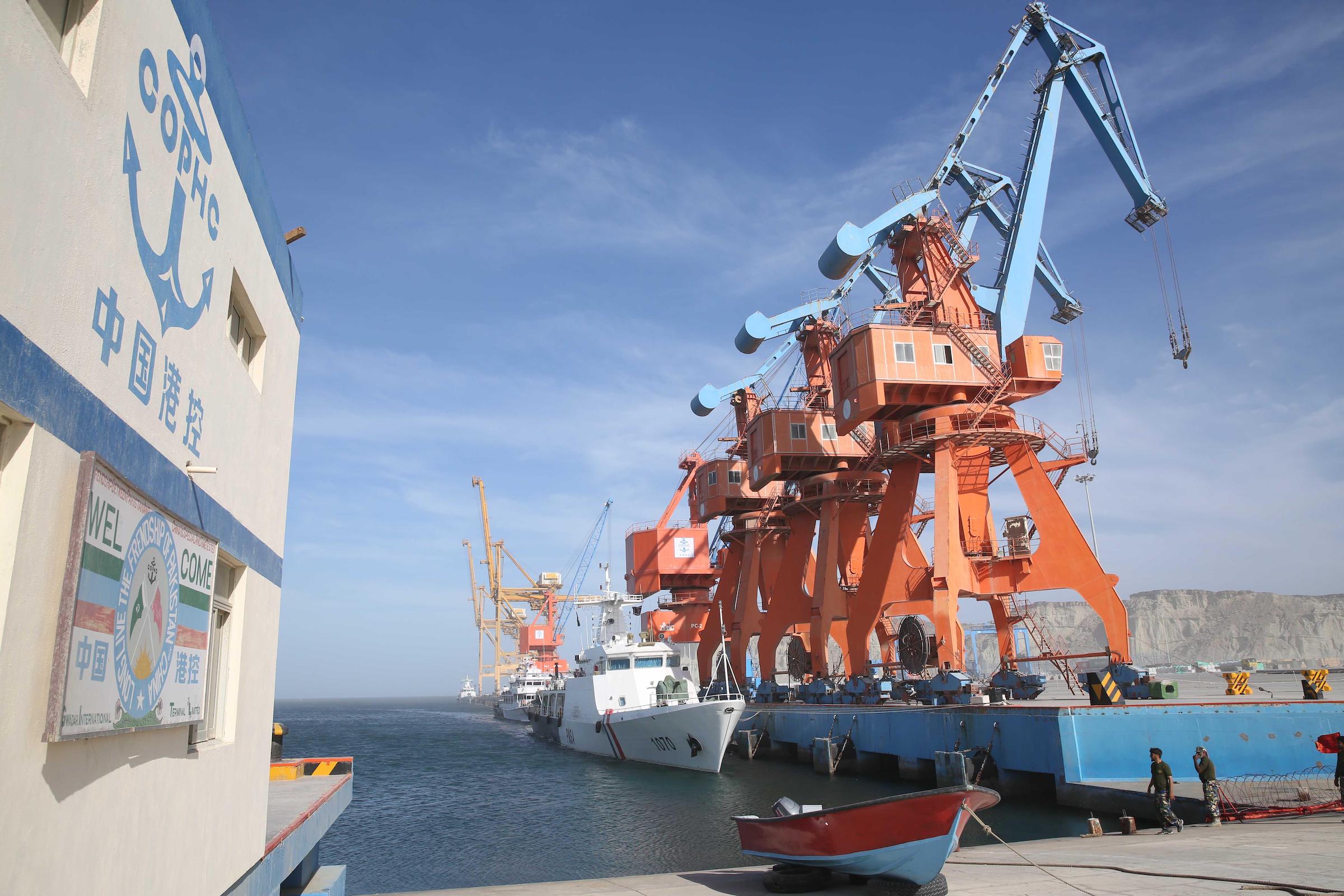 Gwadar port in Pakistan – a flagship BRI project. The future of a 300MW coal-fired power station, to be built on site, is in question following the Chinese government’s latest advice. (Image: Liu Tian / Alamy)

The Opinions also mention to “promote the green and low-carbon development of overseas coal-fired plants which have already been built”. This refers to the retrofitting of existing coal plants, for example to make them less polluting, more efficient, or to install carbon capture, utilisation and storage technology. While that could be an improvement in some cases, there would be a risk of an increase in the lifetime emissions of such projects. From a climate perspective, capacity expansions are very similar to new coal plants, so they should certainly not be allowed.

The Opinions include time-bound targets for 2025 and 2030. Although they are a bit hard to measure, they nevertheless espouse some urgency to act. The Opinions stress that, by 2025, China wants to see clear progress towards a green BRI that is recognised by all parties and touches practical cooperation in green infrastructure, including energy and transportation, as well as finance. Also, environmental-risk prevention of overseas projects needs to improve significantly, requiring more capacity development.

By 2030, the Opinions stipulate that “the green development of the BRI will be basically formed” with further improved risk prevention and control systems.

The recent Application Guide for the Green Development Guidance, published by BRIGC in October 2021, stated that “financial institutions and enterprises are encouraged to add no new ‘red’ projects and phase out existing exposure to ‘red’ projects by focusing investments on less risky projects in their portfolio with an ambitious timeline”. An accompanying figure suggested that, by 2030, red (ie potentially environmentally harmful) projects, should be phased out of existing portfolios and no longer receive new or extended financing.

The scope of the Opinions

The Opinions highlight a wide range of sectors suitable for green development, including infrastructure, energy, transportation, industry and trade. Cooperation on green finance, technology and standards are emphasised. And climate mitigation and adaptation are mentioned as key areas.

Building on previous policy documents on greening the BRI, the Opinions re-emphasise the need to strictly follow host country laws on environmental protection. However, contrary to the 2017 Opinions and in line with the 2021 and 2022 Guidelines, it also encourages enterprises to follow international or higher Chinese environmental standards, such as for project environmental-risk management. Relevant industry associations are expected to create codes of conduct for protecting the environment in enterprises’ overseas investments.

Environmental impact assessments (EIAs) are another highlight, required at the project level. Article 18 asks to identify environmental risks and perform EIAs before initiating construction. This is clearly in line with the Green Development Guidance for BRI Projects, initiated by the BRIGC in 2020, which includes the traffic-light system mentioned above.

Article 18 asks for the development of guidelines for key industries. This would follow on from the work of the BRIGC, which has recently published a Guide for Highways and Railways, and a Guide for Enterprises and Financial Institutions.

In Article 13, the Opinions even suggest to “regulate” the environmental behaviour of enterprises abroad, which would be a significant change on the previous “encouragements” to apply international standards.

The document is co-issued by four ministries and specifies the key role of the Belt and Road Construction Leadership Group, a coordinating body established by the State Council. The involvement of these issuing bodies confirms a solid endorsement by the central government.

As to the intended audience, a list of recipients at the beginning of the Opinions points to a much wider range than previous documents, including authorities in the finance sector and transport sector. Responsibility also lies with private parties, such as financial institutions, industry associations and enterprises.

It is very encouraging to see this continued government effort to green the BRI. As next steps, we would hope to see an increased emphasis on multi-stakeholder governance mechanisms, such as environmental disclosure and public participation. Further clarification on pathways to accelerate reduction of environmental risks from existing projects would also be helpful, such as the phasing out “red” projects, as specified in the BRIGC Green Development Guidance. The formulation of green development guidelines for key overseas project investment sectors is also essential.

A possible new area to explore in the BRI could be debt-for-climate or debt-for-nature swaps, which might be a way to respond to debt crises in some BRI countries, through financing nature-based solutions or stepping up renewable energy deployment, for example.

Overall, the Opinions are ambitious and comprehensive. They provide a clear policy signal for further greening China’s overseas investments in the next years. This is extremely timely, as the world is facing increasing pressure from climate change and biodiversity loss. China, as the main finance and trade partner in many developing countries, can play a key role in their green and low-carbon transition.

A Chinese translation of this article will be available soon.

Can the EU and China align their carbon markets?

Indonesia, not the EU, needs to make its palm oil sustainable