The remote Indonesian island of Wawonii, just 35km at its widest point, has recently become a battleground between villagers and a nickel-mining company backed by Chinese investors.

Back in March, violent protests against the nickel industry had broken out in nearby Kendari, the capital of Southeast Sulawesi province. The deputy governor of the province quelled that unrest by promising to revoke mining permits. But when the governor himself reversed that decision, preparations for mining commenced, causing outrage and the deaths of two protesters.

Home to 34,000 people who depend on farming and fishing, Wawonii illustrates the strong feelings of many communities to Indonesia’s drive to increase nickel production with the help of Chinese investment.

The company aiming to start mining in Wawonii, Gema Kreasi Perdana (GKP), is an arm of the Harita conglomerate owned by Indonesia’s super-rich Lim family.

Through a subsidiary, Harita also operates a nickel smelter on the Indonesian island of Obi, to the east of Wawonii, financed by Harita and two subsidiaries of the Chinese firm Xinxing Ductile Iron Pipes. Harita controls 20% and Xinxing 80% of that project. Most of the nickel processed there is then exported to China.

Though it hasn’t started mining yet, GKP has been building roads, a jetty and a housing complex for its employees.

This early construction has been met with strong opposition from many local people in Wawonii, who are afraid that mining activities will destroy their fragile island ecosystem and damage their livelihoods.

GKP’s operational director, Bambang Murtiyoso, claimed the company would not dump its waste in the rivers or the sea. “We have good waste management,” he told local media. “Just look at our company that’s operating on Obi island … There’s no river pollution there.”

However, GKP’s Wawonii project has driven a wedge between residents who are for and against the company. “Brothers and sisters’ relationships are torn apart. Husbands and wives are getting divorced,” said 23-year-old islander Mando Maskuri. 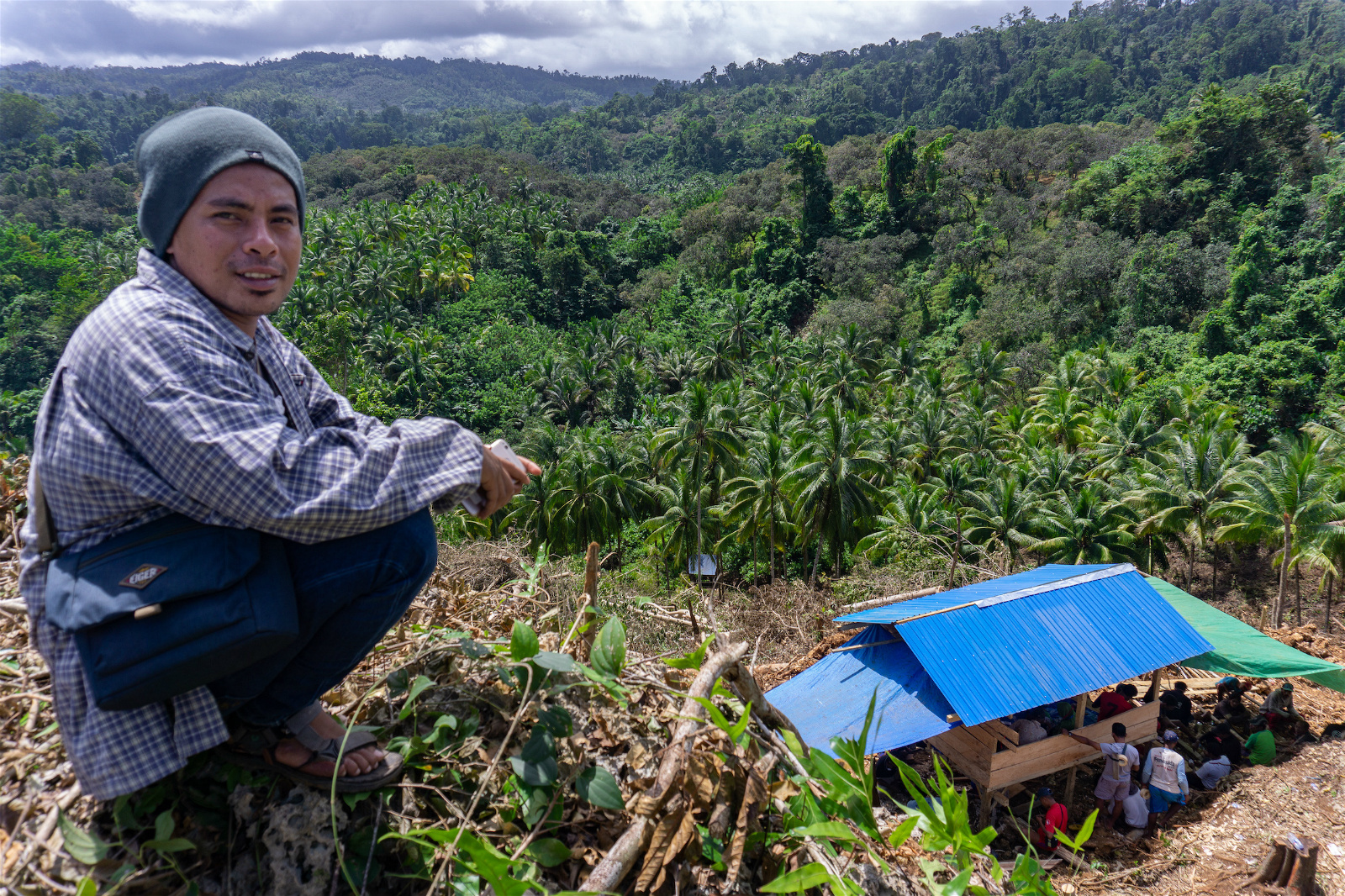 Mando above huts built by local people to protect their land against further incursions by GKP (Image: Ian Morse)

While his own cousin, Marzuki, applied for a job with the company, Mando positioned himself at the forefront of the battle against it and other mining companies by organising rallies in nearby Kendari.

At midnight on 22 August, GKP had used excavators and bulldozers to clear lands owned by residents of Sukarela Jaya village, destroying crops including cacao, coconut and banana.

This was the third time the company had entered the community, accompanied by local police officers. Community members trying to defend their lands are at risk of being branded criminals. Mando said 27 Wawonii residents had so far been reported to the police.

Many of them were accused of trying to block the company’s activities. Others, including a man named Idris, were accused of threatening and abusing company workers. On 19 August, before he was named as a suspect, Idris had filed a police report claiming GKP had encroached on his land.

Mando said the company’s jetty has impacted fishers too. “Access to fish in the ocean is difficult now because it’s being blocked by the jetty.”

He is worried that GKP’s operation will become an entry point for other companies to mine nickel on the island.

On 14 September, residents against the company clashed with its supporters. “Someone from the supporter side almost lost his arm because he got whacked by the opposition,” Mando said.

There used to be 15 mining concessions in Wawonii. Nine have expired without being renewed; the other six, all for mining nickel, are frozen, including GKP.

He suspects the mined nickel ore will be sent to Harita’s smelter on Obi Island. Harita, together with China’s Ningbo Lygend, are also in the process of building a US$700 million battery-grade nickel plant on the island. Production is expected to commence in December 2020.

“If we trace the owners of the mining permits in Wawonii, they are indeed linked to China,” Mando said. “While there’s no smelter in Wawonii, the ores are dug up and sent to the big smelter on Obi, which has a lot of Chinese employees.” 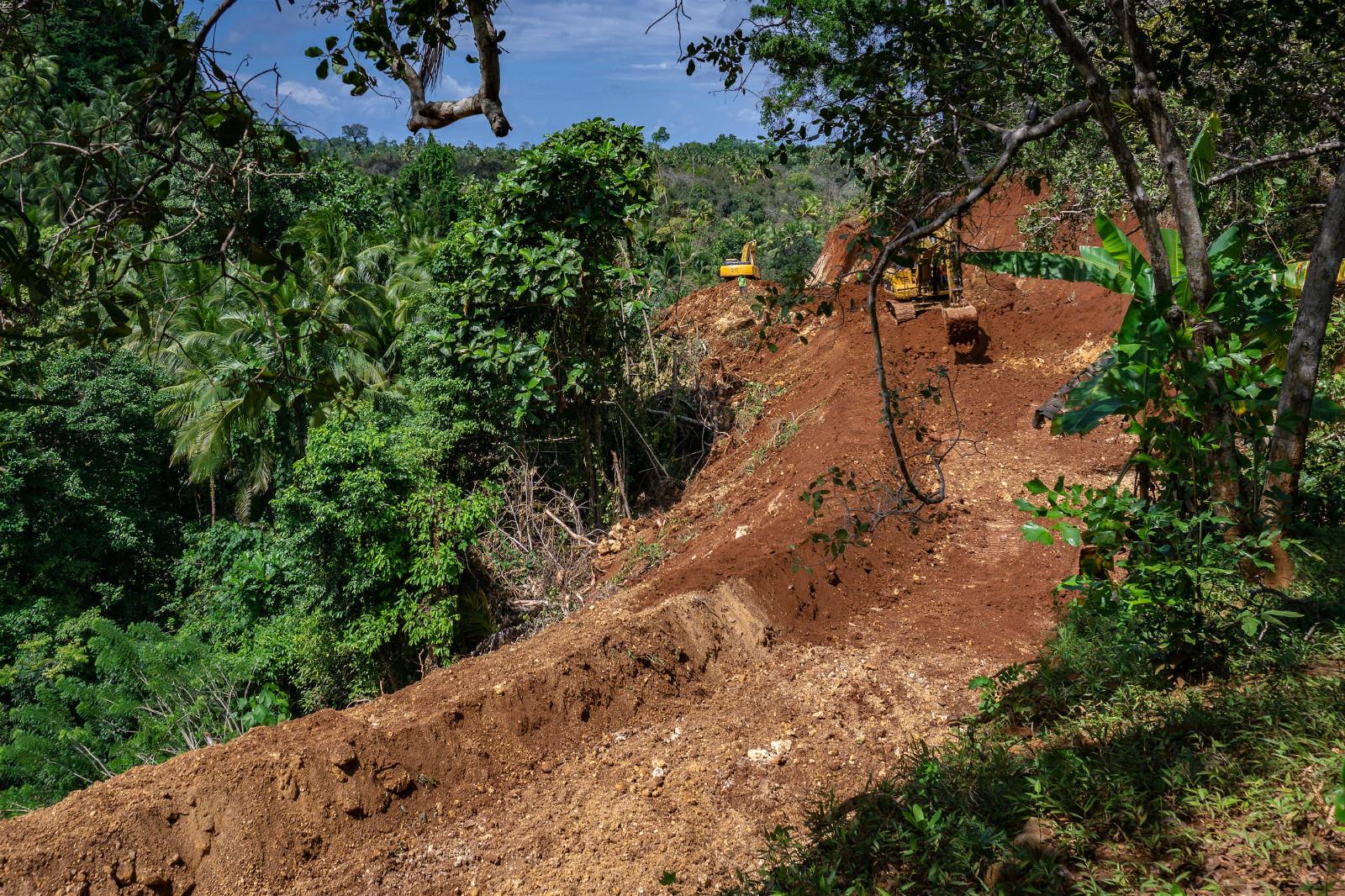 Forest being cleared by GKP​ to make a road on Wawonii (Image: Ian Morse)

As Indonesia looks to develop its nickel-related industries and China eyes further investment, there could be more conflict like on Wawonii in the future, activists warned.

“China invests a lot, not only in coal, but also in nickel,” said Merah Johansyah, of mining watchdog Mining Advocacy Network (Jatam).

“We can see Chinese investments in Maluku and southeast Sulawesi. In the past, they invested in iron-ore mining, but now they are aggressively investing in nickel.”

Yose Rizal Damuri, of the Center for Strategic and International Studies, said China began investing in nickel-processing smelters in Indonesia after a 2009 mining law banned the export of raw nickel ore and bauxite from 2014 onwards.

The government relaxed that ban in 2017 through a quota system. It recently then tightened it again by announcing a complete stop to ore exports from the beginning of 2020 – two years earlier than planned.

The ban is designed to encourage producers to add value by processing ore in Indonesia, and to support Indonesia’s plan to become a major producer of electric vehicles. Laterite nickel ore is a vital ingredient for lithium-ion batteries.

Indonesia currently has 23.7% of the world’s nickel ore reserve, which would be enough to feed the country’s smelters until 2064. But there are concerns over how much of the estimated reserves could be mined. According to government data, the country has 698 million tons of proven nickel reserve, which would only meet demand for about seven years.

“Chinese investors see this ban as an opportunity to enter the mining industry in Indonesia,” Yose said. “Not to mine, but to build smelters. Meanwhile, Australia and the US haven’t built smelters [in Indonesia] because they already have them in other countries.”

China’s investments in the nickel-mining industries have been growing exponentially in the last few years.

“Before 2014, Chinese investments only made up 1% of foreign investments in Indonesia,” Yose said. “But now, they can reach 7-8%, because they invest in smelters.”

In 2014, there was only one nickel smelter in Indonesia. After the export ban kicked in in 2014, the number ballooned to 11. By 2021, Indonesia aims to have 37 smelters operating, drawing in $3 billion in investments. Most are funded by China, according to Andri Budiman Firmanto of the Ministry of Energy and Mineral Resources.

As for battery-grade nickel plants, there are currently at least three in Indonesia with Chinese funding:

The Morowali plant was announced at a 2013 summit between China’s president, Xi Jinping, and Indonesia’s then-president, Susilo Bambang Yudhoyono. The park has no government guarantee but is heavily endorsed by Chinese and Indonesian leaders, and thus often considered part of China’s Belt and Road Initiative (BRI). 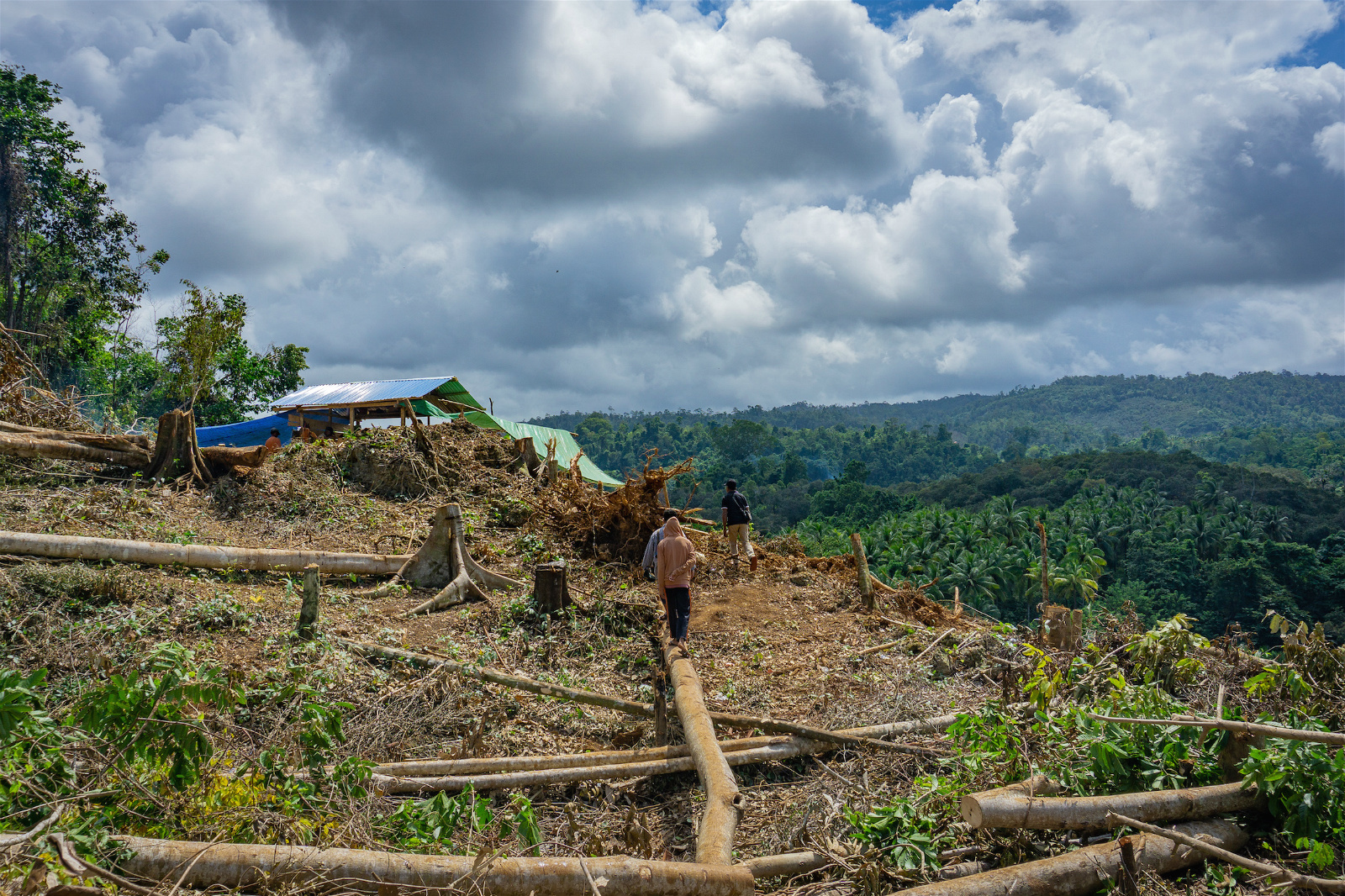 Another view of a temporary hut built by the nickel-mine protesters on Wawonii (Image: Ian Morse)

Yose, of the Center for Strategic and International Studies, said Chinese investment should be met with caution. “Chinese investors are more daring than their counterparts in the US and Europe, maybe because they don’t think too much about rules and standards,” he said. “But we have to be careful with businesses like that. They’re more permissive about environmental issues.”

Already there are concerns over the environmental impact of the planned battery nickel factories, especially on how the plants could safely dispose of their waste, known as tailings.

Developers of the Morowali plant said it should be possible to neutralise tailings by removing toxic materials from them and that they are currently preparing an environmental impact assessment.

Sri Bimo Pratomo from the Indonesian ministry of industry, however, said this issue hadn’t been solved, and remained a roadblock to the projects.

“We know that producing batteries for electric vehicles requires hydrometallurgy, which creates quite a lot of tailings,” he said. “Therefore, they [the developers] plan to dispose of the tailings in the sea. That’s still discussed in the environmental impact assessment permit process.”

Dwi Sawung from the non-profit Indonesian Forum for the Environment (Walhi) said that most of the smelters built by China in Indonesia used old, highly polluting technology, and most Chinese-funded projects lacked environmental safeguards.

“So they dump their old technology here, which is no longer suitable in terms of the environment,” he said.

“We have to be more firm,” he said. “Our [environmental protection] system is already quite good, but that all depends on the implementation.”