The red-robed monk sat impatiently at the front of the consultation meeting in Chiang Saen, northern Thailand. Once the representatives from China Communications Construction Company (CCCC) had finished their presentation he stood up and scolded them for taking too long. He disputed their description of the Thailand-Laos-Myanmar stretch of the Mekong as “primitive”. “Thammachat [the natural system and state of the river] is not undeveloped,” he asserted. “It is rich. To do this to the river without answering the concerns of local people would be the same as stealing.”

The monk spoke at one of a series of public consultations held between 3-5 January by the China-based multinational company with communities along the Mekong in Chiang Rai province. CCCC Second Harbour Consultants conducted the meetings as part of an impact assessment into its proposal to blast and dredge the Mekong for commercial shipping. The company is waiting for final approval from the Thai government.

The scheme aims to open up the Mekong river, which flows from Tibet in China through Southeast Asia, to commercial barges of 500 tonnes (up from the current maximum of 200 tonnes). The project would involve blasting stretches of the river between Thailand and Laos to enable ships to move from China’s Yunnan province all the way to the UNESCO world heritage site of Luang Prabang in Laos.

The project has been in the pipeline for decades but was suspended for 10 years by previous Thai authorities due to concerns over the environmental and social impacts and sovereignty issues on the Laos-Thai border.

In December 2016, the Thai cabinet, in a surprise move, approved CCCC’s plans to carry out an initial survey and impact assessment. China has already blasted sections of the river in Laos but many Thai citizens still feel that while the engineering project may benefit China economically, it will seriously damage the environment. The Lower Mekong river basin supports 60 million people.

In Chiang Rai, where the Mekong forms the Thai-Laos border, the three consultations were packed with locals and campaigners keen to hear from, and be heard by, CCCC.

Plans to improve the navigation of the Mekong had been jointly developed over the last 25 years by the four upper Mekong countries of China, Laos, Thailand and Myanmar.

The stretch of the Mekong set to be modified spans 361 kilometres from the China-Myanmar border to Luang Prabang in central Laos. Several dams will be built below the Thai-Laos border, flooding the sections of the river that are currently non-navigable during the dry season.

The navigation bottleneck is the 97-kilometre section that runs along the Thai-Laos border. It was here that the three meetings took place. 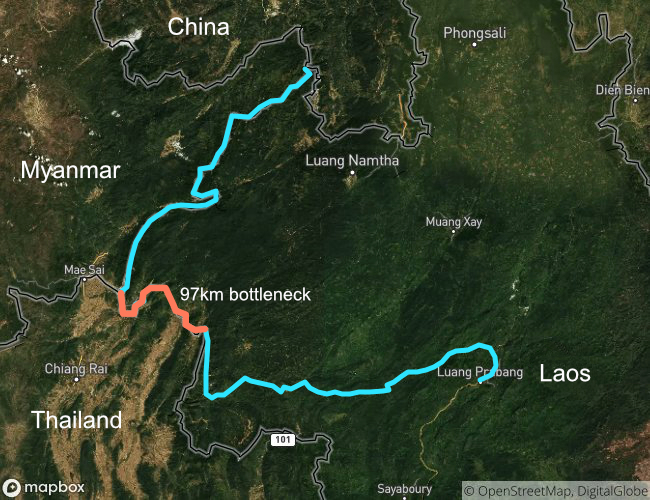 The navigation 'bottleneck' and location of the consultations.

The company’s presentation included 3D video renderings of sites slated for development, or “regulation” as CCCC called it. They identified 158 stretches of shallow water where rocky islets will be dynamited, river beds dredged and sand bars stabilised. Blasted debris and dredged sediment will be piled on other islets, in deep channels in the river, or on shore. Several riverbank reinforcements and anchorage will also be built.

CCCC did not specify the location and precise details of each site or the potential impact on local livelihoods.

Thai civil society organisations (CSOs) have complained of not receiving timely information about infrastructure projects in the past. However, ahead of the meetings they had been given digital copies of a 40-page document in Thai.

When they got their chance to speak, many said the presentation had been alienating. The Chinese-speaking CCCC staff had used a translator and a Thai subcontractor to explain the project but attendees complained that the translator was not a native Thai speaker, and that some of the information had only been presented in English.

Some people, whose first language is Laotian or the Lanna dialect of northern Thailand, had difficulty understanding the presentation and responding in Thai.

Attendees also complained that the focus of the presentation on shipping and engineering was too technical. The river was not recognised as a crucial source of food, a living ecosystem, and a cultural and spiritual focal point, they felt.

In a meeting in Wiang Kaen district, one village leader argued that the “academic” presentation had done nothing to address issues raised about the dumping of debris at the initial hearings in mid-2018. “The river is being defined as a shipping canal,” he said. “What about the distribution of impacts and benefits to Thailand and its people?”

In Chiang Saen, a former leader of the Chiang Saen Conservation Group worried how changes to shipping would affect the local economy. He wondered how much river traffic the project would divert directly to Luang Prabang. “How many Chiang Saen or Chiang Khong people own 500 tonne barges?” he asked rhetorically.

The famous Kohn Pi Long rapids lie at the upstream end of Chiang Khong district. Here the Mekong runs through channels 40 metres deep or more, even in the dry season. Rocky reefs, islets and sandbars are sanctuaries for fish and birds. The area has profound cultural and spiritual significance for residents.

Local people raised concerns that debris from the dredging would be dumped into the deep channels at Kohn Pi Long, thought to be a habitat of the critically endangered Mekong giant catfish, the largest freshwater fish in the world.

In Wiang Kaen, a schoolteacher challenged the idea that there would be few negative consequences. He said the noise of the works would be the first impact. Then changes to the river’s ecology would affect livelihoods. Finally, the new shape of the river would affect the international boundary and infringe on Thai territory.

At the Chiang Khong meeting, people claimed that 100-tonne Chinese gunships had been accompanying barges along the Myanmar-Laos stretch of the river. Attendees wondered where the international border will lie once the channel has been modified? What are the implications for Thai sovereignty and national security of military vessels patrolling the river?

Niwat Roykaew, director of the Chiang Khong Conservation Group, has opposed channel modification for decades. At all three meetings he spoke forcefully in support of a free-flowing Mekong. He argued that local Thais have been dealing with upstream engineering projects, like Chinese dams, on the Mekong for 20 years. They want to know how Thais will benefit when prior projects had only brought costs, he said.

At each meeting people were asked to raise their hands if they were in favour of the project. No one did. They then asked those opposed to form an “X” with their arms to signify blocking the project. The majority did. (Image credit: Andrew Stone)

The Laos government has agreed to channel modification. Though rural Laotians have no opportunity to voice their views, local Laotian-speaking Thais claimed that they are in fact opposed to it.

Representatives of CSOs and the media spoke with Thai government officials at the meetings. They reported mixed reactions. One person, who wished to remain anonymous, said he believed the government had already decided to go ahead with the project. Another felt the presentations had made it clear that China would receive all the benefit from the project. Thus, he couldn’t see how the project could progress, especially given the larger issues of national security and sovereignty.

If the Thai government does proceed, they will receive legal challenges and come under international pressure.

In late 2018, CSO members had attended training sessions on impact assessments. That was partly why they demanded more thorough assessments at all three meetings. They said data used for the environmental and social assessments were out of date and incomplete. Some people pointed out this project must not be considered in isolation. There has been no cumulative assessment of the impact of multiple dams and projects on the river over time.

The Belt and Road, and the river

Many of those present believed that the navigation project is directly linked to China’s Belt and Road Initiative (BRI), its flagship scheme to strengthen regional connectivity across Asia and Europe through infrastructure investment. They saw it as lacking consideration for local culture. While not an official BRI project, the shipping plans are strongly aligned with the wider Chinese investment drive in the region, including railways and special economic zones.

As for Laos they wondered if the country really needs a further infrastructure connection with China and Thailand. Roads already exist, they said, and once the China-Laos railway has been completed in 2021, the journey through the country for passengers or freight will be cut to three hours.

In the three consultation meetings locals took the opportunity to express their deep concerns about the impact of clearing their river. Frustration and sometimes anger were palpable, but whether the consultations will have any impact on the outcome of the final project is not yet clear.

CCCC’s projects have run into trouble elsewhere because of their failure to consult properly with local communities. In Sri Lanka, local protests stalled a major investment zone around the new Hambantota port being developed by a CCCC subsidiary China Harbour Engineering Company.

The river ‘is not for sale’ warn Mekong villages