Until recently, you might be forgiven for thinking the oceans were a trivial component of Earth’s climate system, and that the consequences of change were minimal. After all, only 5% of papers published on climate change involve ocean systems. The Intergovernmental Panel on Climate Change (IPCC), which evaluates the peer-reviewed scientific literature, did not devote a regional chapter to the ocean until its most recent major report.
Yet the ocean system could not be more important: it regulates the global temperature and atmosphere, feeds 3 billion people, and largely determines our weather. The ocean also has lots of “inertia” – which means getting the ocean to change takes a lot of energy, but once it begins to change, slowing it down becomes more or less impossible.
A paper published last week in Science, of which I am one of the authors, has issued a warning that our window of opportunity to save the oceans from major changes is in danger of slamming shut, bringing with it the risk we will encounter planetary-scale tipping points in the behaviour of the climate. Building on the IPCC’s extensive assessment last year of the effects of climate change on the oceans, my co-authors and I have compiled the latest evidence and projections about the ocean under rapid human-driven climate change.
The news is not good. Failure to act on climate change will see warmer and more stagnant oceans, with declining oxygen levels and productivity in some regions, and the removal or modification of ecosystems in other areas. Fisheries and national economies are in the crosshairs in many regions. Rising seas and intensifying storms, plus a loss of critical coastal features, will make life on the shores of a rapidly changing ocean dangerously different to today. 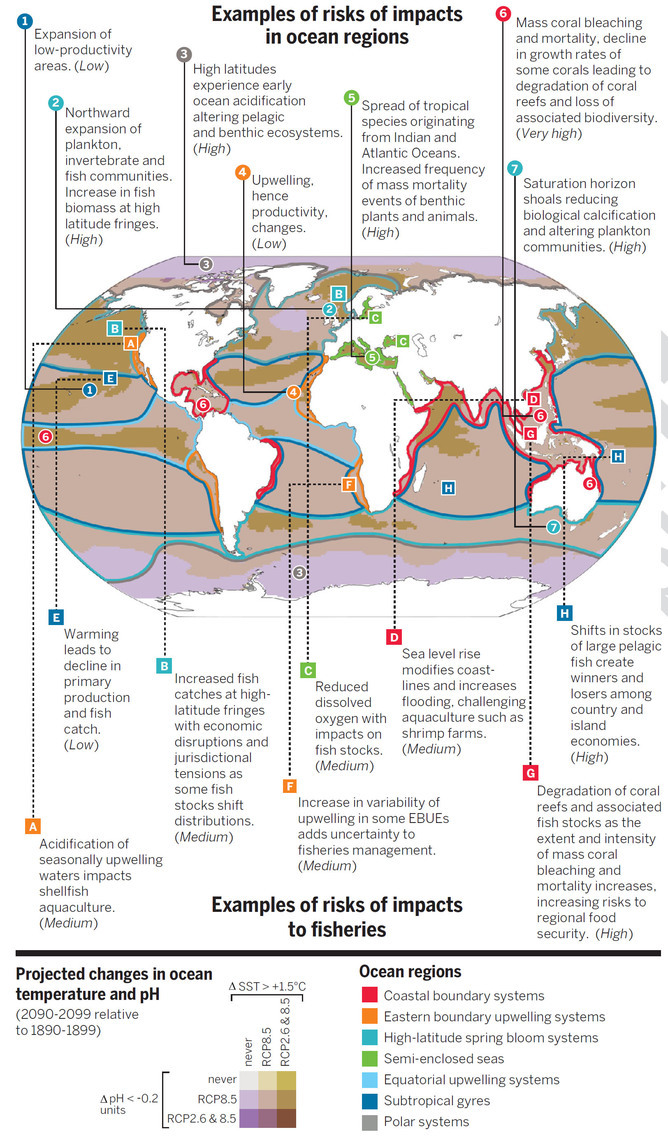 A lot hinges on whether we can meet the globally agreed 2C “warming guardrail”, but there are fears this is impossible within current economic strategies, and that even this target is unsafe.
It would be fine to state this if we had a safe alternative, but we don’t. Consequently, the bar for the end-of-year Paris climate summit is set much higher than many understand. As I’ll explain below, we need a global deal that reduces global emissions to zero over the next 20 years, or else we will see momentous changes.
Calls to action
Thankfully, world leaders are beginning to wake up to the challenge facing our oceans. US Secretary of State John Kerry and Prince Albert II of Monaco, are among those who have spoken out against what many see as impending chaos.
The latest is Pope Francis, who became the first pontiff to warn of ocean warming, acidification and sea-level rise, pointing out in his recent encyclical that “a quarter of the world’s population lives on the coast or nearby, and … the majority of our megacities are situated in coastal areas”.
Our research adds to the mounting evidence that these leaders are right when they say we need to act decisively on fossil fuel emissions and other drivers of climate change.
One of the most stunning conclusions from the IPCC’s report is the statement that “the current rate and magnitude of ocean acidification are at least ten times faster than any event within the last 65 million years”. Given that periods of rapid acidification over tens of thousands of years – slow by our current human-driven standard – resulted in mass extinction and ecological collapse, this alone should be reason to act.
In a few regions, such as the North Sea, temporary increases in fisheries production are being reported, as the ice retreats, seas warm, and productivity increases. But these benefits are few and far between, and are likely to disappear over time as the ocean warms and acidifies further.
Coral reefs perhaps provide the perfect parable for the Pope’s encyclical. Everyone appreciates their beauty and value, but few may be aware of the crucial role they play in terms of protecting coastlines, and supporting fisheries and other industries. They generate hundreds of billions of dollars each year and support some 500 million – mostly impoverished – people worldwide. Our report highlights the extreme sensitivity of these ecosystems to ocean warming and acidification. 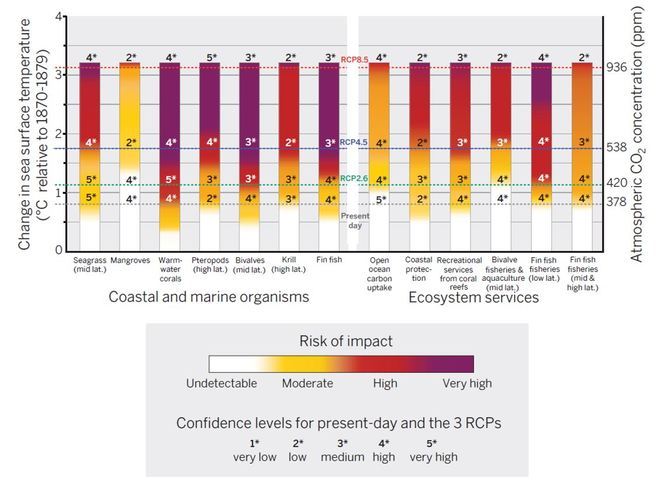 Work to do at the Paris summit
As we progress down the road to Paris, paved with skeletons of these important organisms, there is little doubt about the amount of work that needs to be done in Paris. Analysis of the world’s “carbon budget” (see here and here) suggests we can emit about another 500-800 billion tonnes (gigatonnes) of carbon dioxide before we push global temperatures beyond 2C above the pre-industrial average. This gives us about 20 years before net global emissions have to fall to zero – a tall order, indeed.
There is hope. The recent US-China climate deal is one reason to be optimistic that negotiations in Paris will be smoother than at the Copenhagen climate talks in 2009. But I wonder whether leaders are aware of the true scale of the work that needs to be done to avoid catastrophe. Perhaps the fact that China this week made clear the strength of its new climate commitments is evidence of this.
Yet here is a sobering calculation: imagine the rest of the world falls into line with the US and Chinese climate targets. How much of the world’s budget would we then still burn?
The answer is the world would still emit 1,400 gigatonnes of CO2, or 175-280 percent of our remaining budget, dragging average global warming to 3C and beyond (see the orange line on the graph below). This would be disastrous for us and our children, and many of the benefits of our oceans (coral reefs, fisheries, coastal living) would be transformed beyond recognition. 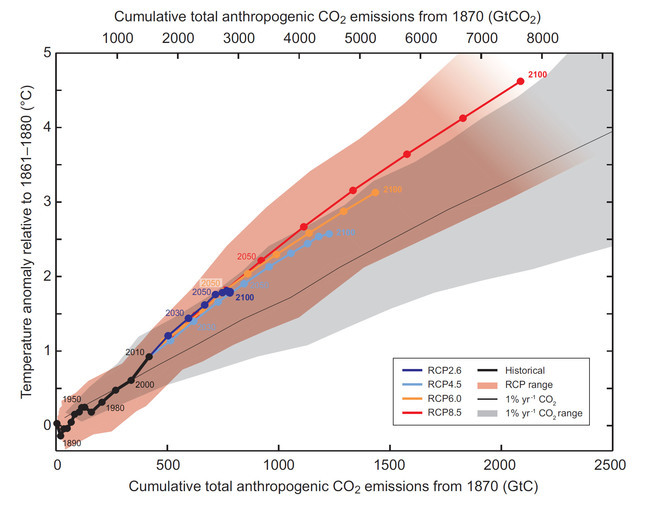 An ethical response
Mention of “us and our children” brings us back to Pope Francis and the importance of not reducing everything to a dollar value. Yet even in pure economic terms, given that the IPCC calculates that keeping atmospheric CO2 below about 450 parts per million (which would give us a good chance of staying within the 2C guardrail) would cost just 0.06% of global consumption growth per year, one is left wondering why we are not jumping right in and solving this problem.
To that end, Pope Francis made an important observation:
In a word, businesses profit by calculating and paying only a fraction of the costs involved. Yet only when “the economic and social costs of using up shared environmental resources are recognized with transparency and fully borne by those who incur them, not by other peoples or future generations”, can those actions be considered ethical.

One can only hope the leaders heading to Paris will heed his words and drive their efforts in a new direction.
This article was originally published on theconversation.com and can be found here.

A new deal for the oceans

Overfishing, global warming and relentless pollution are changing the planet’s waters, putting both marine and human life at risk. On World Oceans Day, Caspar Henderson urges the terrestrial world to wake up.

Catches of the four main species in the South China Sea – the Japanese Spanish mackerel, eel and the large and small yellow croaker – have plummeted.

As an active member of the international community, China has a responsibility to be transparent about the impact of its overseas fishing fleets, particularly in West Africa

As many as 500 million people around the world could be affected by dwindling fish stocks in both inland waters and the high seas due to overfishing, climate change and pollution

Don't worry, our profits are safe as quotas and sanctions are not binding, says Chinese fishing company to prospective investors

With fins off many menus, a glimmer of hope for sharks

China's appetite for shark fin soup has long been blamed for a collapse in populations of the predator, but action by individuals, companies and governments has started to turn the tide