The tragedy in Xiangshui has placed the country’s chemicals industry back in the spotlight, reports Karoline Kan

News and social media images of an explosion on March 21 in Xiangshui county, eastern China, call to mind the terrifying blast at a chemicals warehouse in Tianjin in 2015.

By March 25, 78 people were known to have died in the latest blast, which occurred at a plant in the Chenjiagang industrial park. A further 566 are receiving treatment in local hospitals. Officials from the plant, which belongs to Tianjiayi Chemical Company, have been detained.

The cause of the explosion is still under investigation. But media reports indicate that the tragedy was avoidable and that the lessons of Tianjin have still not been learned.

There had long been indications of risk at the Chenjiagang industrial park, and at the Tianjiayi plant in particular.

In 2007, another explosion at the park, at the Lianhua Technology plant, killed eight and injured dozens. Then in 2010, tens of people were hospitalised after a chlorine leak from a chloralkali process plant.

According to media reports, locals had repeatedly complained of the park being too close to homes. Three elementary schools and two kindergartens are located within two kilometres of the Tianjiayi plant.

According to the Beijing News, the State Administration of Work Safety, which regulates occupational safety in China, had reported problems with the body responsible for monitoring safety at the Tianjiayi plant, citing insufficient analysis and identification of risk factors and hazards, and a lack of targeted measures to rectify issues.

Two days after the blast, China’s president Xi Jinping issued an instruction on the investigation into the explosion and on relief work. The State Council Work Safety Commission also issued an urgent notice on improving safety standards to prevent similar major incidents.

As of March 24, at least 16 provinces or cities had started checks on the safety of their chemical industries. They indicated that lessons would be learned from the Xiangshui blast. A statement by the party secretary of Tianjin drew particular attention. He called for the “bloody lessons” of the August 2015 explosion not to be forgotten.

It seems no improvements had been made at the Tianjiayi plant after the Tianjin explosion. Media reports show that production licenses were not renewed once they had expired in 2016. In February last year, the safety authorities identified 13 different hazards at the plant. Between 2016 and 2018, the company was fined on six occasions for breaches of rules on waste gases or handling of solid waste. In June 2018, the Xiangshui industrial plant was shut down for seven months over environmental concerns, but it reopened early this year.

In ministerial reforms in March last year, the State Administration of Work Safety, responsible for safety in the chemical industry, was made a part of the new Ministry of Emergency Management. That ministry also took over other responsibilities, including fire-fighting, which was formerly the remit of the Ministry of Public Security, and disaster relief, formerly the responsibility of the Ministry of Civil Affairs. The Ministry of Emergency Management ranks higher than the original work safety body, and therefore has greater powers to tackle potential risks. It has organised a number of actions on chemical industry safety, auditing risks and issues in chemical production nationwide. Issues such as poor storage of chemicals, which caused the Tianjin blast, have been discovered at many sites.

But those checks did not prevent this latest explosion. According to a Caixin analysis of the factory layout and aerial photos of the scene, the blast is likely to have originated in a storehouse for hazardous chemical waste. This again highlights the limitations of China’s top-down, campaign-style approach to dealing with day-to-day safety and environmental risks.

Economic growth above all?

The county of Xiangshui, where the blast occurred, has long been relatively undeveloped. But its proximity to the Yellow Sea and the Guan River has made it attractive to chemical manufacturers reliant on shipping for transportation.

To ensure rapid economic growth, chemical firms have been encouraged to build factories here, providing crucial revenue to the local economy. According to the Beijing News, at the highest point in 2011, about one-sixth of the county’s tax income came from the Chenjiagang industrial park.

A media investigation in 2011 found that Chenjiagang was actively courting chemical firms, and implying the local environment could cope.

According to Caixin, rivers near the site of the explosion were still showing excessive levels of pollution as of March 23. Levels of dichloroethane and methylene chloride in the Xinfeng River were2.8 times and 8.4 times higher than normal.

Environment minister Li Ganjie has called for the environmental impact of the explosion to be minimised. According to the Ministry of Ecology and Environment, rivers within the industrial park have been dammed to ensure pollution does not reach the Guan River downstream.

But it is hard to say what the longer-term environmental impacts of the explosion will be.

China accounts for 40% of global chemical sales, a figure that is expected to reach 50% by 2030. The avoidable tragedy at Xiangshui shows that China’s regulators still have a long way to go to ensure that people surrounded by booming chemical industries nationwide do not have to live in fear. 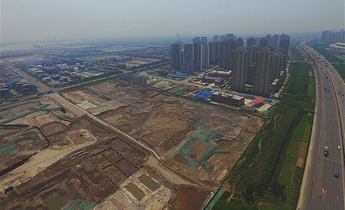 Back to the blast zone: one year after the Tianjin explosion