If Beijing wants to tackle severe winter smog then it may have to adjust policies to account for formaldehyde, according to recent research.

But the new research, carried out jointly by scholars from Harvard, Tsinghua and Harbin Institute of Technology, finds air monitoring tools have confused sulphate with hydroxymethane sulphonate (HMS) – a chemical which is formed when formaldehyde and sulphur dioxide react. In other words, for years the role of formaldehyde in smog formation has been overlooked.

“This misidentification is important because the chemistry that creates HMS is dependent on levels of both formaldehyde and sulphur dioxide in the air,” said Jonathon M Moch, an author of the report, which was published in the journal Geophysical Research Letters in October.

“In the Beijing area, the limiting factor [when tackling air pollution] has usually not been sulphur dioxide but rather formaldehyde. In such situations, reducing sulphur dioxide emissions alone would not affect the levels of HMS in the atmosphere,” added Moch.

This also partially explains why China still suffers severe smog in winter despite years of passing regulation to tighten control of sulphur dioxide emissions. Last winter Beijing closed nearby factories and placed strict controls on the use of coal for winter heating. In 2016, authorities issued the city’s first “red alert”, when PM2.5 readings were so high they were off the scale. But closing down factories only became effective once sulphur dioxide levels fell below those of formaldehyde.

“These controls also led to heating shortages in some areas,” Moch said, “and may therefore be difficult to maintain or replicate for other urban areas”.

The high price of Beijing’s blue skies in winter last year was widely reported. Government projects to replace coal-burning for heat with natural gas or electricity ran into delays, leaving many people with heating shortages. Beijing and Tianjin were just two areas where wide-ranging directives were issued to stop certain types of heavy industrial work for months, such as road building, construction and demolition.

Air pollution is a major challenge for low and middle-income nations, including China. On October 30 the first WHO Global Conference on Air Pollution and Health was held in Geneva, just after a new report said 93% of the world’s under-18 population (1.8 billion children) are exposed to air pollution that can cause health problems or early death. The report estimated that air pollution contributed to respiratory tract infections that resulted in the deaths of 600,000 children under 15. Research from Nanjing University showed that in 2013 one third of deaths in 74 of China’s major cities were linked to PM2.5 pollution.

China tackles smog primarily by controlling the release of sulphur dioxide, nitrogen oxides and volatile organic compounds. These are seen as the main substances involved in the chemical reactions which create PM2.5 pollution.

This has been somewhat successful. During the 12th Five-Year Plan (2011-2015) emissions of sulphur dioxide and nitrogen oxides dropped by 18% and 18.6%, respectively. Under the latest 13th Five-Year Plan emissions of these two pollutants  are expected to drop a further 15% on 2015 levels by 2020. But despite the huge efforts made, air pollution in northern China remains severe.

A report from Greenpeace last month showed that new satellite monitoring data located ten of the world’s 50 largest sources of nitrogen dioxide in China. And as the winter heating season approaches, observers are worried northern China will suffer smog again.

The Harvard report may offer a new option. Formaldehyde emissions come predominantly from transportation, the chemical industry and oil refining. There are many such sources in Beijing and the surrounding area which could be dealt with.

“The new work from Harvard suggests that in order to reduce extreme haze in Beijing, policymakers should focus their efforts on reducing emissions of formaldehyde,” said Moch. “In eastern China, this would mean focusing on cars and trucks as well as oil and chemical refineries, the major sources of formaldehyde.” 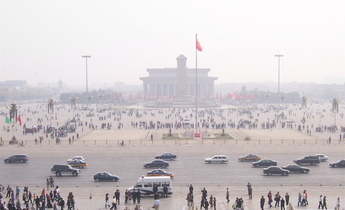 New offices required to house mega-department, but will climate change survive as a priority after being shifted out of the powerful development commission

Experts are calling for the government to return to cutting capacity after policy reversal, reports Feng Hao